[ditty_news_ticker id="27897"] Archpriest Nikolay Balashov: There is a consensus on the principal points of granting autocephaly - Orthodox Christian Laity 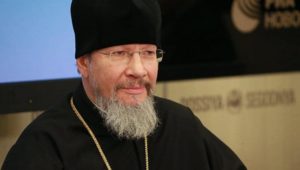 The Synod of the Patriarchate of Constantinople has stated its intention to discuss with all the Local Orthodox Churches the appeal made to it by Ukrainian President Petr Poroshenko to create an autocephalous Church in Ukraine. Is there today a commonly accepted procedure for granting church independence – autocephaly and what does canon law say about this mechanism? – a detailed explanation given to RIA Novosti by the vice-chairman of the Moscow Patriarchate department for external church relations, Archpriest Nikolay Balashov.

–  Father Nikolay, why does the question of granting independence to a particular Church have no clear answer given once and for all, why there are no appropriate fundamental prescriptions?

–  Indeed, the conditions and procedure for granting autocephaly are not explicitly prescribed in the acts of Ecumenical Councils (their decisions are fundamental and paramount for all the Churches – ed.).

For this reason, when preparations began for a pan-Orthodox Council in 1961 in Rhodes, this topic by common agreement was included in the catalogue of issues for discussion. The Local Orthodox Churches began to consider it actually at the meeting of the Inter-Orthodox Preparatory Commission (IPC) in Chambesy, near Geneva in 1993.

By that time eight Local Orthodox Churches had presented their papers on ‘Autocephaly and Ways of Declaring It’. In the diversity of opinions, two conceptually different positions can be singled out.

The Patriarchates of Constantinople, Alexandria and Jerusalem and the Greek Orthodox Church emphasized the priority of the competence of Ecumenical Councils and Local Councils of the Patriarchate of Constantinople to grant autocephaly. The Patriarchates of Moscow, Romania and Bulgaria as well as the Polish Orthodox Church proceeded from the independent right of every autocephalous Church to grant autocephaly to its canonical part. However, in the course of the discussion, an agreement was reached on the principal thing: there is no autocephaly without the declaration of the will of the Mother Church, i.e., the Local Orthodox Church to which its part wishing to receive autocephaly belongs. Nor there is autocephaly without a pan-Orthodox agreement ‘expressed in the unanimity of the Councils of the autocephalous Churches’. Given the perfect unanimity of the Churches reached on these principles, it remains only to agree upon the procedure and details of the process.

–  Which details are in question in the first place?

–  Due to the importance of the problem, which has become now especially acute in connection with certain events, I will give an extensive quotation from the 1993 IOC final document sealed by representatives of all the universally recognized autocephalous Churches:

a) the Mother Church, in receiving a request from a subordinate church region, shall assess the existing ecclesiological, canonical and pastoral preconditions for granting autocephaly. Should a Local Council as the supreme church body give its consent, it shall make an appropriate proposal to the Ecumenical Patriarchate to seek a pan-Orthodox consensus informing the rest of the autocephalous Churches.

4. The Local Churches declared autocephalous are to be brought in as equal to the fellowship of Orthodox Churches and shall have all the common Orthodox established privileges (diptychs, liturgical mention of names, inter-Orthodox relations, etc.).

Note. The contents of Par. 3b will continue to be considered by the next Inter-Orthodox Commission which is to find a unanimous position of the Local Orthodox Churches on it, thus completing its work on this matter’.

So, with the full agreement on the fundamental principles the task ahead was to agree upon on the way of declaring autocephaly granted with common consent of all the Local Churches: who will sign the appropriate documents and how it is to be signed.

However after that the process of joint work stopped.

–  What prevented a full agreement on the procedure and final solution of the problem?

–  But later the negotiations of Churches on this problem resumed. What did they manage to achieve?

–  Nine more years had passed before the Patriarchate of Constantinople abandoned its demands in 2008. The process of preparations for a Pan-Orthodox Council resumed.

The IOC meeting in 2009 in Chambesy (I was among the participants in the meeting – just as in all the previous ones devoted to the preparation of a Council, until May 2016) managed to make another step towards a full agreement, as a formulation was worked out for the only remaining point, which had not been brought to its final wording for previous sixteen years.

Now it is formulated in this way:

‘3c) in expressing the consent of the Mother Church and pan-Orthodox consensus, the Ecumenical Patriarch officially declares the autocephaly of a petitioning Church by issuing a Patriarchal Tomos.This Tomos is to be signed by the Ecumenical Patriarch and testified by the signatures of their Beatitudes Primates of the Most Holy autocephalous Churches invited to this aim by the Ecumenical Patriarch’. A stronger accent is made on the pan-Orthodox consent as a condition for autocephaly. At the same time, ‘questions concerning the content of the Tomos (decree – ed.) on autocephaly and the way of its signing by the primates’ have remained uncompleted as to the wording and were conveyed to the next IOC ‘for seeking a unified position of the Churches’.

–  Why has the way of signing a Tomos on autocephaly remained not defined to this day?

–  The question of signing a Tomos was discussed at the IOC in 2011, but a full consensus on it by Local Orthodox Churches was not reached. And, indeed, a consensus of all the universally recognized autocephalous Churches was a fundamental principle of all the previous works for preparing a pan-Orthodox Council. All the Churches agreed that a Tomos should be signed by all the Primates. Everybody agreed that the signature of the Ecumenical Patriarch (of Constantinople) is to occupy the first place. But the delegation of the Patriarchate of Constantinople insisted that the signature of the Ecumenical Patriarch should be also singled out in a special way. In particular, it was proposed that it should be provided with the word apophenete (Gr. ‘decides’) while the signatures of the Primate of the rest Local Orthodox Church should be provided with the word synapophenete (‘decides together’).

The delegation of the Russian Orthodox Church expressed an opinion that a Tomos should be confirmed by equal signatures of the Primates of all the Local Orthodox Churches, with the Patriarch of Constantinople certainly given the place of the first among the equals. Because of the unsettled differences on such, in general, a marginal question, the topic of autocephaly was not put on the agenda of the Pan-Orthodox Council. By the decision made at the Synaxis of the Primates, which took place in 2014 in Istanbul, this matter should have been discussed additionally as part of a newly established Special Inter-Orthodox Commission, so that in case of a consensus it can be submitted to the Council. However, in fact, the commission has failed even to begin studying this matter despite the calls of several Churches. Thus, in 2015, the Primate of the Georgian, Serbian and Bulgarian Orthodox Churches, in their correspondence with Patriarch Bartholomew of Constantinople, stood for bringing the topic of autocephaly to the Council’s agenda.

At another Synaxis of the Primate, which took place in January 2016 in Chambesy, the Russian Orthodox Church insistently proposed that what little remained to agree upon on the matter of granting autocephaly should be finalized at the Council. But the Patriarchate of Constantinople was afraid that it could delay the convening of the Council.

Nevertheless, Patriarch Bartholomew of Constantinople assured Patriarch Kirill of Moscow and All Russia that neither the Council nor the Patriarchate of Constantinople after it would take any action that would involve the legalization of the schism or the granting of autocephaly to Ukraine. On this understanding, the Russian Church agreed to hold a Council without consideration of the autocephaly topic, of which Patriarch Kirill officially notified all the Primates during the Synaxis (assembly- ed.) on January 24, 2016.

–  But the Council on Crete has never become pan-Orthodox. It has put off a decision on autocephaly for good? Or is there a hope?

–  Unfortunately, during the further preparation of the Council, for reasons not dependent on the Russian Orthodox Church, a proper attention was not given to the repeatedly stated disagreement of the Church of Antioch to attend it without a prior solution of the disputed problem of church jurisdiction in Qatar (The Churches of Antioch and Jerusalem contest the right to the parishes in Qatar – ed.) and to the objections put forth by the Churches of Georgia and Bulgaria. All this led to the fact that the Council did take place but failed to become pan-Orthodox.

But it is a different story, though it does not cancel the fact that on the principal issues concerning the granting of autocephaly – the role of the Mother Church as initiator of the process and the essential consensus of all the Local Churches expressed in the unanimity of their Councils – a pan-Orthodox agreement or, in the words of the document, ‘a full convergence of views’ was achieved as far back as a quarter of a century ago.