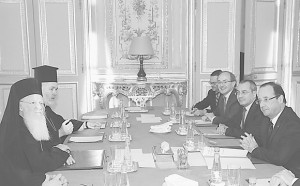 CONSTANTINOPLE – Ecumenical Patriarch Bartholomew is attempting to inaugurate a new path and new dynamics of rapprochement and reconciliation with the Roman Catholic Church in conjunction with the Theological Dialogue working towards the Eucharistic Union of the Churches.

In his speech to the Delegation of the Church of Rome headed by Cardinal Kurt Koch, President of the Pontifical Council for Promoting Christian Unity, at the Thronal Feast of the Ecumenical Patriarchate on the feast day of St. Andrew the First Called Apostle, on the patriarch said on November 30 that “the uniqueness of the founders of our Churches, of Elder Rome and of New Rome, the Holy Apostles Peter and Andrew, as brothers according to the flesh, constitutes a motivation for both of our Churches to move toward the genuine experience of spiritual brotherhood and the restoration of communion in this same spirit, in truth and in love.”

The patriarch went on saying that “unfortunately, throughout the course of the centuries, this brotherhood has been deeply wounded and as a result, the spiritual unity of our Churches has been disrupted.

For centuries, theologians, as well as personalities in both Churches, spent their energy not in the context of dialogue, but rather in promoting and supporting their own positions, not taking into consideration that of St. John Chrysostom, “Thou hast spoken once, perhaps, and he hath not heard. Speak therefore twice, and thrice, and as often as it may be, till thou hast persuaded him. Every day God is addressing us, and we do not hear; and yet He does not leave off speaking.”

Bartholomew desires to make a new beginning that it why he proposed that “it is already empirically evident that the conviction has matured in the hearts of both sides, namely that, from this point on the course of our efforts must be reversed. That is to say, we must expend our spiritual energy not in the effort of finding justifications for the strengthening of positions, which we overly defended in the past towards the justification of the schism, but in sincerely endeavoring to find arguments that verify the error of divisive inclinations and that, even more, seek out ways of approaching full restoration of the unity of the Churches.”

The patriarch believes that “the best method for investigating this matter is the continuation and cultivation of inter-ecclesiastical dialogues and relations, as well as especial cultivation of the outcome of the dialogue of love into a substantial and theological dialogue between both of our Churches, Orthodox and Roman Catholic. The personal acquaintance of the members and especially of the representatives of the Churches often leads to the discovery that the people involved are of good will, and that a deeper understanding of the events that provoked the schism based upon objectivity will suffice to dissipate fears, suspicions, distrust, and conflicts of the past.”

Bartholomew urges “reinforcing with as much strength as we have this Dialogue of Truth, so that by means of the frequent and wide-ranging discussions, we may raise the level of knowledge and facilitate mutual understanding, thus directing ourselves toward ‘all truth’ (see John 16:13), which always and above all conquers. The mature fruit of this knowledge is the progressive agreement upon particular points, an agreement, which on the tally of disagreements and agreements will continuously increase the sum of the agreements until all disagreements are eclipsed. On that day, we will all, united in faith and love, jointly glorify our Savior Christ, Who will have led us through fire and water to refreshment.”

The Patriarch invited the Bishop of Rome Benedict XVI to work and walk together. He said “both of us, our brother the Pope of Rome and our Modesty, along with our Churches, and all our spiritual leaders, ought to show, by our example, to the rulers of the world’s resources, that they need to remember compassion and love toward those in need, because otherwise social cohesion is at risk, which, if disturbed, will bring enormous destruction to both the just and unjust.”

Bartholomew reminded Pope Benedict that “the current year is passing. With terrifying and negative predictions for the developments of human affairs on a global sphere.”

The patriarch revealed that “our Holy Orthodox Church finds itself in the delightful position of announcing that the preparation of its Holy and Great Synod has almost been completed, that it is in its final stages and will be convoked in the near future. It will pronounce upon the issue, among others, of the dialogues of Orthodoxy with the other Churches and it will take the fitting decisions in unity and authenticity so that we may progress toward the ‘unity of faith’ in the communion of the Holy Spirit in the surety that ‘To lovers of the truth nothing can be put before God and hope in Him’ (Basil the Great, To Eustathius the Physician, Letter 151, PG 32.608B; NPNF2-8:604).”