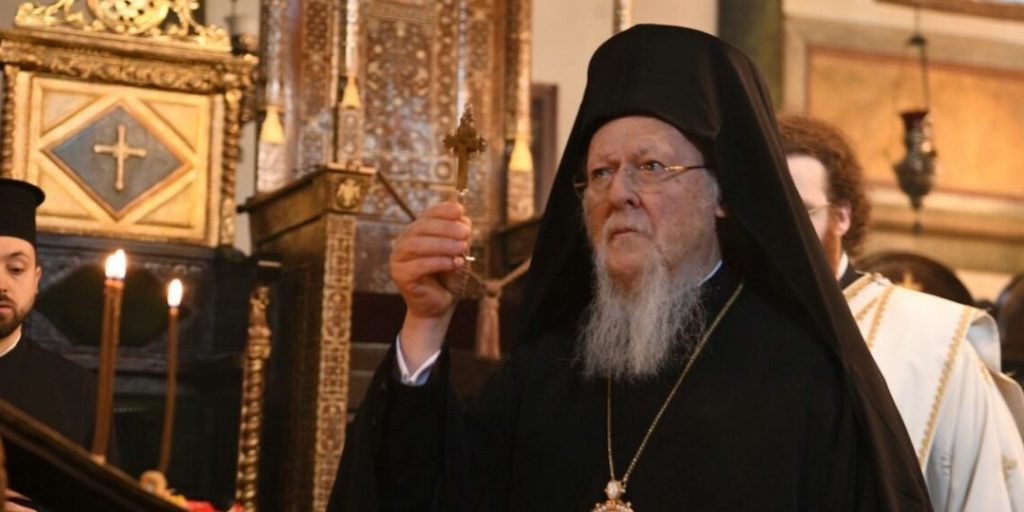 Ecumenical Patriarch Bartholomew has sent a letter to the primates of the Local Orthodox Churches seeking their opinions and thoughts “so that we may commonly walk in the pastoral approach to controversies over the established mode of the distribution of divine communion” during the Covid-19 pandemic.  The full text of the letter in Greek was posted yesterday (June 1) at https://www.romfea.gr/epikairotita-xronika/37382-ektakto-to-oikoumeniko-patriarxeio-zita-epikoinonia-me-tis-orthodojes-ekklisies-gia-tin-theia-koinonia .  Today, a good English translation was posted at https://orthodoxia.info/news/correspondence-of-the-ecumenical-patriarchy-with-primates-of-other-local-orthodox-churches-regarding-the-way-of-distribution-of-the-eucharist/  The letter includes the following important points:

Since, nevertheless, after the praiseworthy interest of the authorities and the priceless prevention of the leaders during the COVID-19 pandemic, certain unseemly points of view have been heard on how to approach the immaculate mysteries, it is impossible for us to remain silent and foreign to such an ambiguous situation, and inactive in the face of development and related government regulations and prohibitions.

We have obeyed the exhortations of the health and political authorities, and as is natural, we obey, to the point, however, where the essence and the center of our faith is not touched.  The condescension of the Church goes to the cross, but nevertheless it refuses to descend from it by obeying the magistrates and authorities of this world when the mystery of the mysteries of her life, the divine Eucharist, is being questioned.

As commented at https://orthochristian.com/131551.html, “now that the faithful are returning to church in many places, variant practices on how to commune the faithful have arisen, including disinfecting the spoon between every communicant, using disposable one-time use spoons, communing the faithful in the hand, and withholding the Eucharist from the faithful until the government permits everyone to commune from the same spoon and chalice.”

The letter of the Ecumenical Patriarch is not only significant as an effort to obtain a uniform approach on this matter in the Orthodox world, but it is also very significant as the exercise of a leadership role by the Ecumenical Patriarch in a situation where some of the Local Orthodox Churches have challenged his role.  Will the Moscow Patriarchate respond and make suggestions for a uniform approach when it has in fact severed communion with the Ecumenical Patriarchate?  Will Churches such as Serbia, Antioch, and Poland, which have sided with Moscow on the Ukraine dispute, respond?  Will Moscow seek to take the initiative, such as suggesting a meeting of all of the primates to discuss this and other issues?  However, a common response is needed immediately and arranging a meeting would take time.  It will be interesting to see what will happen.

On May 27 there was the very surprising announcement that Enzo Bianchi, the lay founder of the Bose Monastery, and three others from the Monastery had been directed by the Holy See to leave the Monastery as the result of an apostolic visitation to the Monastery that occurred from December 6, 2019 to January 6, 2020.  The letter containing the directive was signed by Cardinal Pietro Parolin, Secretary of State, and had been specifically approved by Pope Francis.  https://www.vaticannews.va/en/vatican-city/news/2020-05/bose-community-enzo-bianchi-required-to-leave.html;
https://www.monasterodibose.it/en/community/news/community-life/13895-hope-in-trial  If you are not familiar with the Bose Monastery and the important Orthodox conference that it holds each year, I have attached a short article about the Monastery and the conference that I wrote for the November 2019 issue of Inside the Vatican magazine.

Bianchi had announced his retirement as prior of the monastery in 2016, and Brother Luciano Manicardi had been elected as his successor.  After the election, Bianchi, who has a very strong personality, remained at the Monastery and very actively participated in its life.  According to the announcement, the visitation had occurred because of “serious concerns expressed by several members to the Holy See, which indicated a tense and problematic situation in our Community regarding the exercise of the authority of the founder, the community’s management, and the fraternal climate.”  In the course of the investigation by the apostolic visitors, every member of the community was interviewed.  The decision by Pope Francis to approve the relocation of Bianchi must have been a very painful one for Pope Francis as it appears that he has a very close and warm relationship with Bianchi.  Since the announcement, the members of the community have been generally silent about the underlying problems, and the details have not been given to the media.  Bianchi has been silent except for a short interview with the Repubblica newspaper (https://www.repubblica.it/vaticano/2020/05/27/news/enzo_bianchi_rompe_il_silenzio_santa_sede_ci_aiuti_mai_ho_contestato_il_legittimo_priore_-257778279/?ref=search)  and short comments on Twitter (https://twitter.com/enzobianchi7).  However, today he announced that he accepted the decision with “painful obedience.”  https://www.lastampa.it/biella/2020/06/02/news/enzo-bianchi-accetta-di-lasciare-la-comunita-di-bose-con-sofferta-obbedienza-1.38919006  The following article contains some information concerning alleged negotiations during the last few days.  https://www.ilfattoquotidiano.it/2020/06/02/enzo-bianchi-via-a-tempo-indeterminato-da-comunita-di-bose-cinque-anni-per-i-monaci-breda-e-boselli-e-per-la-sorella-casiraghi/5822084/

Due to the pandemic, the 28th International Ecumenical Conference on Orthodox Spirituality, “The Way to Reconciliation,” will not be held at the Bose Monastery on the scheduled dates.  https://www.monasterodibose.it/en/hospitality/conferences/orthodox-spirituality/2020-the-way-to-reconciliation  However, it is hoped that this conference, when rescheduled, will continue the tradition of the outstanding conferences on Orthodox spirituality held in the past.

In other news, Metropolitan Onufry, head of the UOC-MP, celebrated the Divine Liturgy last Sunday at Kiev-Pechersk Lavra.  https://news.church.ua/2020/05/31/u-nedilyu-7-mu-pislya-pasxi-predstoyatel-ocholiv-bozhestvennu-liturgiyu-u-kijevo-pecherskij-lavri/  This was his first public liturgy in many weeks.  The next day he presided over the funeral service for the church choral conductor and composer Mykhailo Lytvynenko.  https://news.church.ua/2020/06/01/blazhennishij-mitropolit-onufrij-zvershiv-chin-vidspivuvannya-mixajla-semenovicha-litvinenka/   These are welcomed appearances which should allay some worries relating to his current health.  The Vatican has appointed Archbishop Giovanni d’Aniello as the new apostolic nuncio to the Russian Federation.  http://press.vatican.va/content/salastampa/en/bollettino/pubblico/2020/06/01/200601b.html  He had been the nuncio to Brazil for the prior eight years.  http://www.blagovest-info.ru/index.php?ss=2&s=3&id=88650  The immediate reaction by the Moscow Patriarchate to his appointment has been positive.  https://ria.ru/20200602/1572331652.html   Metropolitan Vladimir (UOC-MP), governor of the famous Pochaev Lavra in Western Ukraine, has written a letter to Metropolitan Vladimir of Moldova expressing the support of the Lavra for the position of the Church of Moldova (MP) opposing mandatory vaccinations against the coronavirus.  https://www.religion.in.ua/news/vazhlivo/46434-mitropolit-upc-mp-i-pochaevskaya-lavra-protiv-billa-gejtsa-vakcinacii-mikrochipov-i-5g.html  As you recall, the Church of Moldova through its Holy Synod had express concerns about any mandatory vaccinations, citing among other things the fear expressed by some that the vaccines may contain nanoparticles which allow the recipients to be controlled remotely.

Anniversary of Fall of Constantinople

Lastly, on the occasion of the May 29th anniversary of the fall of Constantinople in 1453, a very interesting English-language article concerning the heroic defense of the city during the final days has been posted at https://orthodoxtimes.com/the-fall-of-constantinople-the-dreadful-day-29-may-1453/.  For me, it is fascinating how Greeks and Italians, proponents of the Union of Florence and opponents, came together in those final desperate days.  The following are two paragraph relating to the night before the fall:

In the city everyone realized that the great moment had come. During Monday, May 28, some last repairs were done on the walls and the stockades, in the collapsed sections, were reinforced. In the city, while the bells of the churches rang mournfully, citizens and soldiers joined a long procession behind the holy relics brought out of the churches. Singing hymns in Greek, Italian or Catalan, Orthodox and Catholic, men, women, children, soldiers, civilians, clergy, monks and nuns, knowing that they were going to die shortly, made peace with themselves, with God and with eternity.

When the procession ended the Emperor met with his commanders and the notables of the city. In a philosophical speech he told his subjects that the end of their time had come. In essence he told them that Man had to be ready to face death when he had to fight for his faith, for his country, for his family or for his sovereign. All four reasons were now present. Furthermore, his subjects, who were the descendants of Greeks and Romans, had to emulate their great ancestors. They had to fight and sacrifice themselves without fear. They had lived in a great city and they were now going to die defending it. As for himself, he was going to die fighting for his faith, for his city and for his people. He also thanked the Italian soldiers, who had not abandoned the great city in its final moments. He still believed that the garrison could repulse the enemy. They all had to be brave, proud warriors and do their duty. He thanked all present for their contribution to the defense of the city and asked them to forgive him, if he had ever treated them without kindness. Meanwhile the great church of Saint Sophia was crowded. Thousands of people were moving towards the church. Inside, Orthodox and Catholic priests were holding mass. People were singing hymns, others were openly crying, others were asking each other for forgiveness. Those who were not serving on the ramparts also went to the church, among them was seen, for a brief moment, the Emperor. People confessed and took communion. Then those who were going to fight rode or walked back to the ramparts.

Sometimes it takes great adversity to bring us all together.