by George Demacopoulos and Aristotle Papanikolaou 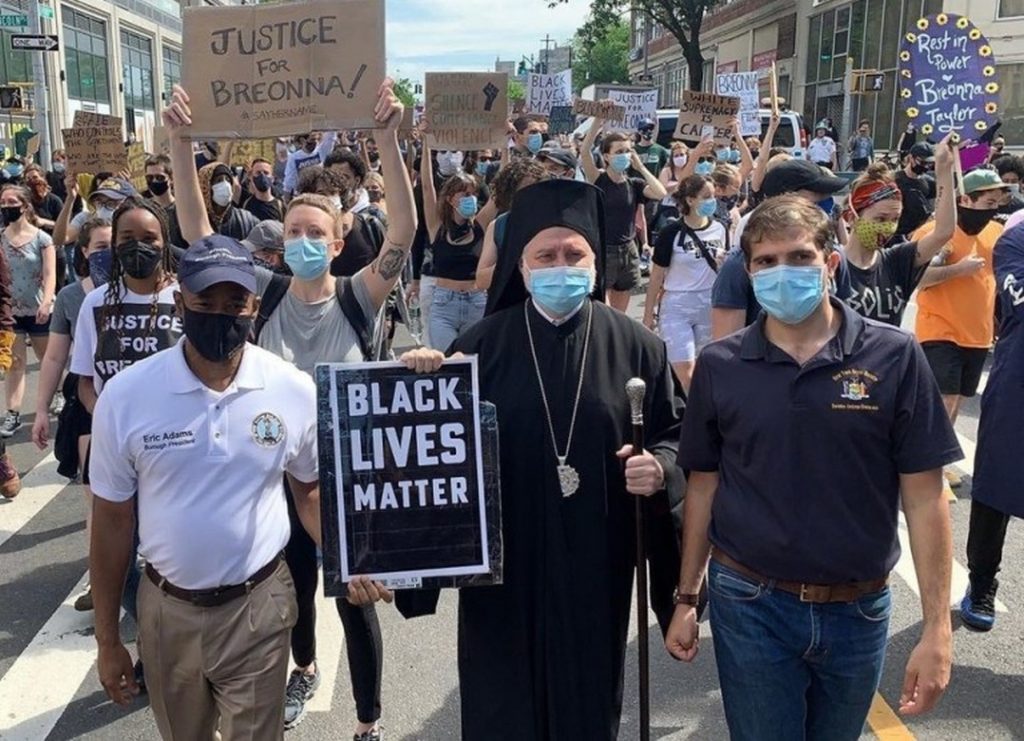 When Archbishop Iakovos stood alongside Martin Luther King Jr. in Selma in 1965, he was maligned by many Greek Americans who took offense that their Archbishop would “fraternize with Civil Rights agitators.” Fifty-five years later, opinion has shifted dramatically. Iakovos’ march alongside MLK is widely regarded as one of the iconic moments of Orthodox Christianity in the United States, if not globally. Today, we either ignore or apologize for that generation of Orthodox who did not understand the moral necessity of the Civil Rights movement.

We now find ourselves at a similar moment. Will our grandchildren have to apologize for us because we stood on the wrong side of history, or will we accept the spirit of the Black Lives Matter critique because it is morally and theologically convicting?

The slogan “Black Lives Matter” emerged after multiple killings of unarmed black men by police officers. Its initial purpose was to expose the systemic racism that exists within the institutional infrastructures that constitute our society: police, government, economy, and the churches, to name a few. It is an extension of the Civil Rights movement’s demand that, in the words of MLK, the United States be “true to what it said on paper.” Racism, however, has a different shade than it did in the 1960s: it is no longer manifestly evident on the buses, on storefront signs, in hotels and restaurants, in factories, in corporations, in public education, in universities, in the military, and in government; but it still exists in those areas systemically, which means it is woven within the very infrastructure of all these institutions—but it is much more subtle, hidden, and unconscious. Anyone who denies this systemic racism has to provide answers for the existence of income inequality between blacks and whites, for exponentially higher incarceration rates among black men and women, for the absence of blacks in university professorships and in university classrooms, for the racial profiling that occurs for simply walking on the street, for the disproportionate lack of access to healthcare or affordable housing, and, recently, the experiencing of higher infection rates of COVID-19—the list can go on and on.

Among Orthodox Christians, as elsewhere, we often hear the counter: “All Lives Matter.” We do not deny that, and a core Christian axiom is that all are irreducibly unique in God’s eyes; but, if a parent has two children and one was bullying the other, the parent would surely rush to defend the victim even while still loving the bully. That’s why God’s love does not contradict God’s preferential option for the oppressed.

We also hear “Blue Lives Matter.” Again, we do not deny that, and we, personally, have friends and family in the police force. Fighting against systemic racism is not meant as an attack against police. That is a false binary. Attention, however, needs to be drawn to the fact that the problem is not a few bad apples in the police force; the problem is that racism is systemically woven into the fabric of policing: the training, the strategy, and the implementation. Racial profiling and statistic-based policing are two prime examples.

Finally, we hear people object to any association with BLM because that would imply support for issues that are contrary to Church teaching. This fails to recognize the diversity of those who support BLM, and it projects the possibility of a pure politics that is impossible. Those who support the pro-life movement are often walking with others who share beliefs contrary to the teaching of the Church. More than this, the Orthodox Church should really do more on social issues than simply participate in March for Life. The Fathers of the Church were constantly fighting against poverty and oppression, and the single-issue politics of many Orthodox Churches is embarrassing.

As Greek Americans, we like to remind everyone of how our ancestors suffered after World War II and worked hard in this country, and often suffered discrimination, to make things better for the next generation. No one is denying this history, and we should always honor it; but it fails to recognize that one of the reasons they were allowed to advance in this country is that, in addition to hard work, they were white (one of the reasons—not the only one). And most came to this country in the 1950s and ‘60s, when racism was out in the open. If we were to be honest with ourselves, many Greek Orthodox were racist at the time; hence, the outcry when Archbishop Iakovos walked in Selma. It also forgets that this country’s original sin is slavery; that it was built on slavery and that African Americans have always had to negotiate living in a space they were forced to inhabit and in which they never felt welcomed—even to this day.

Archbishop Elpidophoros of the Greek Orthodox Archdiocese understands all this and that is why he has been compelled to stand against racial injustice. He does not want to be one of those pastors to whom MLK wrote his Letter from a Birmingham Jail, who scolded King for causing trouble and for his impatience. As a Christian raised in Turkey, Elpidophoros has experienced structural oppression in ways that most Americans can only imagine.

The problem is that too many Americans—too many Orthodox Americans—do not want to imagine it. We would rather deflect, deny, and ignore because we fear that genuine equality for black men and women would only come at our expense.

Fifty years from now, how will our grandchildren view the way we acted in this moment?

Aristotle Papanikolaou is the Archbishop Demetrios Chair in Orthodox Theology and Culture and the Co-Director of the Orthodox Christian Studies Center of Fordham University.