[ditty_news_ticker id="27897"] They Should Beg for Forgiveness, and Some Should Resign - Orthodox Christian Laity 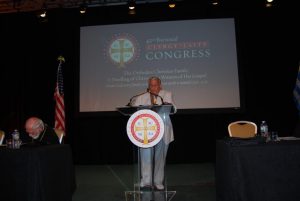 The least that His Eminence Archbishop Demetrios, the Holy Eparchial Synod, the Archdiocesan Council, and the Finance Committee should do is to publicly ask forgiveness from the parishes and from the Greek-American community in general for the bankruptcy of the Archdiocese.

Maybe the archbishop is trying to hide behind Jerry Dimitriou’s resignation, but the reality is that Demetrios, not Dimitriou, is the archbishop. Dimitriou was an employee of the Archdiocese, certainly a high ranking one, but it is not just and fair to place all the heavy blame and the responsibility on him.

Of course, the Synod members, with few exceptions, are not any less responsible, despite their attempts to hide and assert they didn’t know. Why wouldn’t they know? What kind of Synodical hierarchs are they? All are responsible for the collapse of the Archdiocese.

Unfortunately, the establishment of the Metropolitanate system turned the Archdiocese into a scattered village with nine mini-archdioceses, each with a mini-archbishop. We shouldn’t forget that in reality they are “employees” of the Church and that everyone and everything in the Archdiocese is financially sustained by the contributions of the piety of the Laity Body.

As far as the Finance Committee, headed by George Vourvoulias from Chicago, it can only be characterized as a joke, as we had pointed out many years ago, simply because we saw with our own eyes and heard with our own ears all that was said and done at the Clergy-Laity Congresses and at the meetings of the Archdiocesan Councils. We are talking here about tragicomical situations because there was no existent archbishop.

The Finance Committee members should have tendered their resignations collectively and begged for forgiveness from our faithful people and from the priests. The latter, instead of being “stewards of the mysteries of God” have become money collectors for the support of the “myth” called ministries. The present bankrupt stage of the Archdiocese shows that all those assurances given by the Finance Committee at the Clergy-Laity Congress and the Archdiocesan Council meetings, that everything was good and beautiful about the finances, was simply blown smoke. The reality is different and it has a name: bankruptcy.

Accordingly, Demetrios is the fateful archbishop who can repeat Greek Prime Minister Charilaos Trikoupis’ tragic declaration “regretfully, we are bankrupt.” What a shame and what an irresponsibility and incompetence! What else can anyone say?

The painful reality is that the members of the parishes will be called again to pay the $8.5 million deficit, and we hope and pray that the amount will not be increased. The begging will start again: “be generous for the necessities of the Church.”

Woe if the Laity Body wakes up and says “Stop! Here stops the constant begging for us to give more to save the Archdiocese.” Alas, if only the Laity would say: “we have given enough, now it is time for you to reduce your expenses for your lavish lives and assume your responsibilities!”

It seems to me that we are heading toward a new day: the parishes cannot afford the exorbitant expenses for the sustenance of priests and hierarchs. The priests would be forced to find parallel jobs along with the priesthood, and the number of metropolitans should be reduced to half. After all, why we need all of them? Furthermore the metropolitans should receive a small salary for their personal expenses since everything else is paid by the Church, meaning by the members of the parishes, i.e., all of us.

We also state respectfully that His All Holiness Ecumenical patriarch Bartholomew bears a great responsibility and he has delayed a great deal in demonstrating his concern and care for the Greek Orthodox Church and Greek-American community in America with bold decisions, instead of simply by words. He has the responsibility and the authority that derive from his high office to procced as soon as possible to the catharsis of the Archdiocese.

The Patriarch should go ahead and retire Archbishop Demetrios and also some other problematic hierarchs. His All Holiness knows the individuals and situations very well. He follows everything and he should have acted many years ago, but it is never too late. He also has to be careful about his selections because the Archdiocese cannot afford any more wrong choices. It has reached the bankrupt stage, the only point lower than that is where its historic end lurks.