Creation as Sacrament: Reflections on Ecology and Spirituality 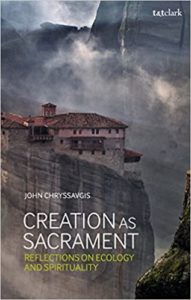 When speaking once in a discussion on climate change about the sacramentality of creation, a priest of the Greek Orthodox Archdiocese of America responded to me, “I know there are seven sacraments, but I’ve never heard of creation as a sacrament.” This is exactly the kind of attitude that has itself contributed to an exploitative relationship to the cosmos and which John Chryssavgis hopes to correct with his aptly-titled book, Creation as Sacrament: Reflections on Ecology and Spirituality. There exists a caricature of Christianity that Christians themselves often project and reinforce: it is one that reduces Christian faith to the salvation of an individual soul, whose destiny in heaven or hell is based either on merits or providence. In this particular version of Christianity, actions matter either in terms of their moral “goodness,” or as manifestations of an elected state insofar as they impact the various spheres of human relations – family, society, and government. The rest of creation appears as a backdrop to this divine-human drama, a neutral territory with little to no eschatological significance.

There is – and, more importantly, always has been – another way to see it all. This is a theme that runs through Creation as Sacrament and which Chryssavgis attempts to retrieve, as it has particular relevance given the current climate crisis. This other way is shaped by what might be called an incarnational logic, for which there is no better summary than Athanasius of Alexandria’s, “God became human so that humans can become god.” Chryssavgis extends that incarnational logic to include creation: if, in fact, the human was destined to become god, then all of material creation is the bearer of the weight of the divine presence; our only challenge is to see that which is covered by sin. In addition to Alexander Schmemann, the well-known orthodox liturgical theologian, echoes of John Zizioulas, who offered the “Foreword” for the manuscript, ring throughout: the sacramentality of creation (Schmemann) is nothing less than an event of creation being“personed” (Zizioulas), that is, a rendering of all created materiality as irreducibly unique and free from the necessity of sin in relational unity in the person of Christ, who is a pneumatological reality.

It is this “Theory and Theology” that Chryssavgis attempts to detail in the first of two sections of the book, both of which consist of five chapters. Chryssavgis begins with a theme that runs throughout the book: “reintegration.” If, in fact, the Incarnation declares that all materiality is sacramental – the bearer of the divine presence – then this would preclude structuring reality in terms of dualisms and unbridgeable separations often get cast in terms of diametrical opposition. In a sacramental vision of creation, “the church is the world: a set of spheres such as church, world, and grace this the world, which it is intended to transform. And the world is the church, which it is called to become” (20). Here Chryssavgis draws on an understanding of Church that is not identified with the institution but is understood as a cosmic reality. The Church is the cosmos in union with its Creator; it is grace in the sense that it is material reality redeemed and transfigured in and through its Spirit-filled relationship with the Father in Christ. If we fail to see that, then our vision of the cosmos and its various spheres is immediately skewed. Absent that vision, where there is unity-in-diversity, we will immediately see distinction-as-division. Church will be set over-and-against the world, as it has been in a particular Christian trajectory, and grace will be limited to the individual soul. This dualist and divisive way of envisioning the God-world relationship leads to seeing creation as lacking any grace, as having any eschatological significance. It is a seeing that justifies handling material creation as that which can be simply discarded, as the backdrop of the soul’s individual struggle for eternal life. This dualistic imaginary of the God-world relation overemphasizes the transcendence of God. In one of the more eloquent and poignant citations in the book, Chryssavgis draws on Phil Sherrard to remind us that “if only the total transcendence of God is affirmed, then all created things, all that is in change and visible, must be regarded as without any real roots in the Divine, and hence as entirely negative and ‘illusory’ in character” (142). An incarnational logic requires that we affirm both the transcendence and immanence of God – that is, God everywhere and nowhere, everything and nothing. Only then will we be able to see how the divine presence – the Logos –permeates nature throughout.

This is the vision of the God-world relation that exists within the patristic texts of the Orthodox tradition and, as is characteristic of his other work, Chryssavgis gives us paradigmatic expressions of this sacramental view of the cosmos in the fathers of the Church – both East and West – and even in Plotinus. In the Christian texts of late antiquity, creation ex nihilo did not signal simply an abyss between the created and the uncreated, but the constitution of otherness for the sake of communion.

This sacramentality of creation is not simply articulated linguistically in speech and writing, but embodied by the Desert Fathers in practices of solitude, silence, and stillness. The desert may itself evoke a striking contrast with the life that exists in the Earth’s oceans and the forests, which are threatened by the climate crisis. In the Desert Fathers, however, one sees the way of life that is life-giving, that uncovers the divine presence latent within all of creation, that turns the death of the desert into renewal and resurrection. Chryssavgis points to how both the contemplative and active life, theory and praxis, theology and spirituality, mutually inform and shape each other in this movement toward the manifestation of the Incarnation in the whole of the cosmos, which is nothing less than the becoming of the Logos – the reason and wisdom of creation whose presence sin has obscured. This is the great mystery of creation itself, its sacramentality, its existing in between finitude and infinity, and as “mysterion,” it is and always has been sacramental, latent with the divine presence. That is why to restrict sacraments to seven rituals has never really been entrenched in the Orthodox Christian tradition, since that would distract from the realization that God is everywhere present and fills all things.

If the first section of Chryssavgis’s book paints a picture, the second section presents a call to action that would bring that picture – one that already exists – into focus. Chryssavgis lays out the full arsenal employed in spiritual warfare against the darkness that has engulfed the earth: icon, liturgy, ascesis. In contemporary Orthodox theology, ascesis is often pitted against liturgy, the individual versus the relational. Chryssavgis avoids that pitfall. Liturgy is, indeed, the paradigmatic relational event, not simply among human beings, but with creation itself. It is not insignificant that in Orthodox Christian liturgies, bread and wine are offered for transfiguration: symbolic of basic elements of life, they are not outside the circle of grace, but very much inside. More than this, grace is inconceivable without the relationality within material creation that includes human and non-human life, and even non-living objects. The Eucharist is the event of the Church, and, as such, it is an event of a world graced by God’s presence.

There is, however, an outside-of-the-parish Eucharist as well, where the Christian engages in ascesis not simply out of concern for their individual salvation, but in order to be a eucharistic being in the world. Such a eucharistic embodiment in the world effects patterns of relationship that iconicize the Kingdom of God, even if such relationality is not yet the eschatological fulfillment that awaits us.  Ascesis consists of practices very much in the world that lead to refinement and restoration as a result of the struggle in renunciation and repentance. In the end, our hope is in resurrection, but this includes material creation as much as it does the individual soul. In the end, however, we must also realize that these practices are a call to a “revolutionary reformation” (133); the fine-tuning and nuancing of the practices that fuel the capitalist engine will not be enough to transfigure the world in the radical way an incarnational logic demands. In fact, such practices mitigate against renewal as they promote a utilitarian and exploitative relationship with the Earth.

Chryssavgis effectively deconstructs misunderstandings that may prevent the deployment of the sacramental vision of creation. One of them is the fabricated dichotomy between faith and science. He effectively shows how in the history of Christian thought, particularly in the fathers of late antiquity, such a diametrical opposition never existed. This faith-science dualism is itself an invention of Enlightenment thought as a way to relegate religion to the private sphere by contrasting it with universal reason. Probably more dangerous than this dualism, ironically, is the misunderstanding of “stewardship” given by Christians over the years, even Orthodox Christians in the book, Creation and the Heart of Man.  There is a Christian version of “stewardship” that is informed by the false notion of human dominion, that is, of lording over creation simply for human needs, satisfaction, and pleasure. An incarnational logic disavows such a stance toward creation, and while humans must make use of non-human life and inanimate objects for various indispensable needs, it cannot be at the expense of the destruction of the planet, which is the current trajectory. As Chryssavgisso aptly puts it, sin is a “breakdown in relationships” and “a sacramental worldview emphasizes personal communion, not personal consumption” (165-66). Stewardship is a facilitating of that communion, an affirmation of the theocentric understanding of the whole cosmos, not a selfish anthropocentric misuse and abuse of material creation.

The global climate crisis is real; it is beyond conservative and liberal politics; it requires conversion to-ward an incarnational imaginary of material creation. Chryssavgis rightly concludes his study by highlight-ing the decades-long efforts of the Ecumenical Patriarch, Bartholomew I, who himself is one of the iconic global religious leaders for climate restoration, healing, and transfiguration. More than anyone, he has dispelled the myth that Christianity is the enemy of creation, often and sadly projected by many Christians with a dualist, non-incarnational understanding of the God-world relation. There is no public-private divide when it comes to the climate crisis; in fact, it is an alliance of those who hold this incarnational vision of the cosmos in a way that can effect a change of mind, attitude, and practice in ways that open one to the gift and mystery that is creation. This book offers with clarity and force a Christian approach to the single greatest threat facing our planet and dismantles the Christian caricatures that seem to have predominantly captured the imagination of most people, Christians and non-Christians alike. It should be read by every-one – undergraduate student, graduate student, scholar, layperson, and scientist – who hopes to effect the“revolutionary reformation” that leads to reconciliation, transfiguration, and resurrection.