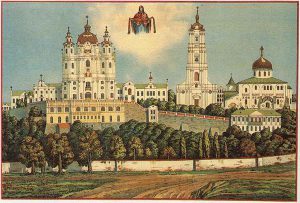 From June 16 to 27, 2016 on the island of Crete will transpire the Pan-Orthodox Council, which, unfortunately, has not been canceled. At the Council they will examine the following documents:

-Autonomy and the Means of Proclaiming It

-The Importance of Fasting and Its Observance Today

-The Mission of the Orthodox Church in the Modern World

-The Sacrament of Marriage and Its Impediments

The document entitled “Relations of the Orthodox Church with the Rest of the Christian World” has caused the most questions and criticisms.

The brothers of the Holy Dormition Pochaev Lavra share the concerns of our fellow monks, bishops, priests, and God-loving laity who take care for their salvation and the fate of the Church of the Christ.

We are grateful to those who labored and expressed their comments and proposals for amending the submitted documents.

The judgment of Vladyka Benjamin, Metropolitan of Vladivostok and Primorsk, expressed in letter to the participants of the conference “The Pan-Orthodox Council: Opinions and Expectations,” on April 19, 2016 at St. Tikhon’s Orthodox University for the Humanities, is very important for us.

For our part, we want to assure the parishioners and pilgrims of our Lavra that, trusting in the grace of God, the protection and intercession of the Heavenly Queen, being strengthened by the prayers and examples of our great ascetics and venerable fathers Job and Amphilochius, the wonderworkers of Pochaev, and looking to the podvigs of our instructors who survived the most brutal persecutions and profanation in the time of godlessness, the brothers of Pochaev Mountain will continue to do everything possible to ensure that in the churches of our monastery the faithful will receive Divine grace in the Mysteries of the holy Orthodox Church, founded by Christ the Savior Himself, the dogmas of which were enshrined by the holy fathers in the decisions of the seven Ecumenical Councils and are in need of no change. Indeed, Divine Truth is perfect and unchanging. And to us was entrusted by the Savior of the world to preserve and preach it, and not to “modify” it.

We firmly believe that our Lord Jesus Christ keeps His Church unshakeable and invincible,and the gates of hell shall not prevail against it (Mt. 16:18).

We call upon the God-loving people to send up their heartfelt prayers that the All-Merciful Lord would henceforth strengthen us all in the purity of the Orthodox faith, in which is found the only possibility for eternal salvation.