President Putin’s battle to control the “Russian world” includes a religious front: a centuries-old spiritual and nationalist struggle within the Orthodox church – a part of the consciousness of average churchgoers worldwide.  – Laurent 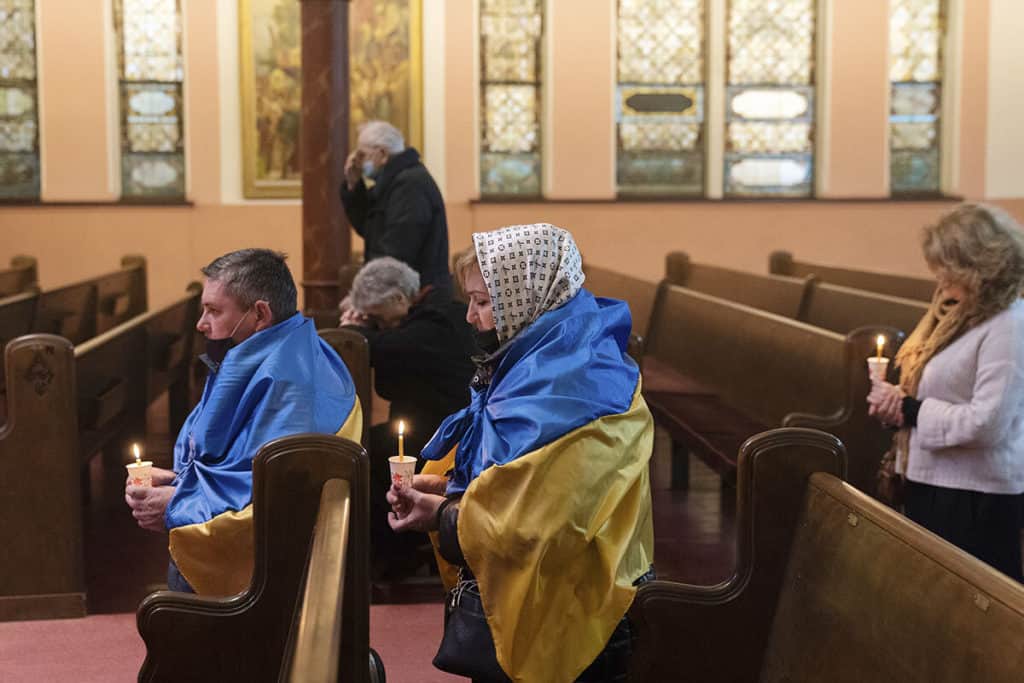 Jeenah Moon/AP
People wrapped in the colors of the Ukrainian flag pray during a service at New York City’s Ukrainian Orthodox Cathedral of St. Volodymyr on the Sunday following the Feb. 24 Russian invasion of Ukraine.

In the wake of an invasion that has shaken the globe, the diaspora of Ukrainians from Winnipeg to Warsaw has taken to the streets to denounce a war they say is unprovoked. But another side of their fierce resistance is spiritual – ringing in choruses, sermons, and prayers inside Byzantine-style Ukrainian Orthodox churches and cathedrals around the globe.

After centuries in the sway of Moscow – from nationalist czars to atheist politburos – Orthodox Christians of Ukrainian descent are fighting not just a political battle but for spiritual sovereignty from Russia’s arm of the Orthodox church. These are struggles of identity that date to the 17th century and threaten Vladimir Putin’s sense of Russia’s place in the world.

“Darkness will never break the soul of our nation. If the Russian empire is darkness, I will call the Ukrainian nation the sparkle of light,” sermonized the Rev. Jarslaw Buciora in the St. Volodymyr Ukrainian Orthodox Cathedral in the heart of Toronto on the Sunday of the Last Judgment – and the first Sunday since Mr. Putin ordered the invasion of Ukraine.

A few minutes later, as the choir sang, a blustery snowfall broke and, for just a few moments, light shined through the richly adorned cathedral.

Voice breaking at times, Mr. Buciora delivered a two-and-a-half-hour Ukrainian and English liturgical rebuke of Russia that echoed the complex, centuries-old entanglements of religious passion and cultural identities in the Christian Orthodoxy shared by Russia and Ukraine.

The Orthodox Church of Ukraine, supported by the diaspora in North America, broke free from Moscow in 2019 – winning official recognition from the seat of the Ecumenical Patriarch of Constantinople, based in Istanbul. And Ukrainian diaspora communities here in the West say they refuse to let that victory be undone by the invasion of their homeland.

Alexander Thompson/The Christian Science Monitor
A woman crosses herself during a service at St. Andrew Ukrainian Orthodox Church in Boston on Feb. 27, 2022. Services throughout the Ukrainian Orthodox diaspora were full after the Feb. 24 Russian invasion.

Independence of the Orthodox Church of Ukraine, says Mr. Buciora in an interview, was like “somebody put the body on the soul, as if the people got the second part of their life back. Even though we were enslaved by the Russians over the last three centuries, we never lost our faith in God. Because you can put down the body, you can destroy the physical element, but you will never destroy the spiritual element inside of you. That’s exactly who we are.”

The Orthodox churches in Ukraine had been under the jurisdiction of the Russian Orthodox Church since 1686. The fight for an autocephalous, or independent, church is a long and divisive history and so theologically labyrinthine that scholars disagree on major points. And even parishioners, themselves, don’t always fully understand them.

But the Orthodox independence movement gained force in Ukraine after the fall of the officially atheist Soviet Union and, once again, after Mr. Putin’s annexation of Crimea in 2014. When Ukrainian leader Petro Poroshenko was elected that year, he saw an opportunity to appeal to the Ecumenical Patriarch Bartholomew I, spiritual leader of the world’s Orthodox Christians, for autocephaly, which was finally granted in 2019.

It was a huge event in the Orthodox world – and a major blow to Mr. Putin, who claims his own post-Soviet Orthodox religious awakening after his family narrowly escaped a fire at their dacha.

The issue has been more complex inside Ukraine than within the North American diaspora. By and large, the Orthodox diaspora in Canada and the U.S. identifies with an independent Ukrainian church, rather than the church that remained loyal to Moscow, and takes some credit for its new independence. When autocephaly was granted, Ukrainian Orthodox bishops from Canada and the U.S. were consulted – bolstering Mr. Putin’s claim that the independence movement was Western-backed. 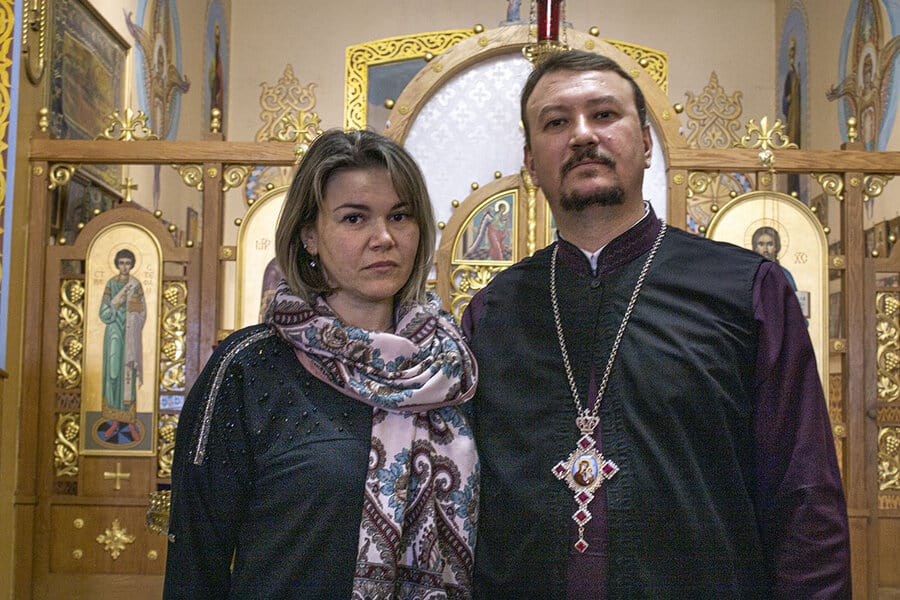 Sarah Matusek/The Christian Science Monitor
Many Orthodox Ukrainians in the diaspora identify with 2019 official recognition of independence given to the Orthodox Church of Ukraine. “It’s our dream, our hope. We waited many centuries for this,” says the Rev. Vitaliy Pavlykivskiy, the priest at All Saints Ukrainian Orthodox Church in New York City, shown here with his wife after a Sunday service Feb. 27.

As a consequence of the autocephaly, Mr. Putin cut off all ties with Constantinople, a move that has split the Orthodox world over who has primacy to grant independence and where allegiances lie politically, says Frank Sysyn, a Toronto-based religious historian at the Canadian Institute of Ukrainian Studies at the University of Alberta.

“Putin’s battle for dominance in Ukraine is also what he would view as a spiritual struggle,” Dr. Sysyn says. “Putin has had to search for an ideology to replace communism for Moscow to be the center of what he calls the ‘Russian world,’ all the people who speak Russian or used to be part of the Russian Empire, and for him they should be part of this fortress that’s going to oppose the West and take over the Orthodox world.

“He argues the reason that Ukraine cannot be separate from Russia is they are one nation, one people, and should have one religion and one faith.”

“Masters in our own home”

Nearly every pew in St. Andrew Ukrainian Orthodox Church in Boston was occupied on Sunday, many congregants dressed in blue and yellow, the colors of the Ukrainian flag.

“Whenever we have a crisis … we have extra people here. They need that anchor during times of tragedy, in times of extra stress. They need that comfort,” says Jane Yavarow, president of the parish. Hymns from St. Andrew’s choir rang through the edifice until the very end, when their voices rose in a national song. Quietly, the congregation joined them. 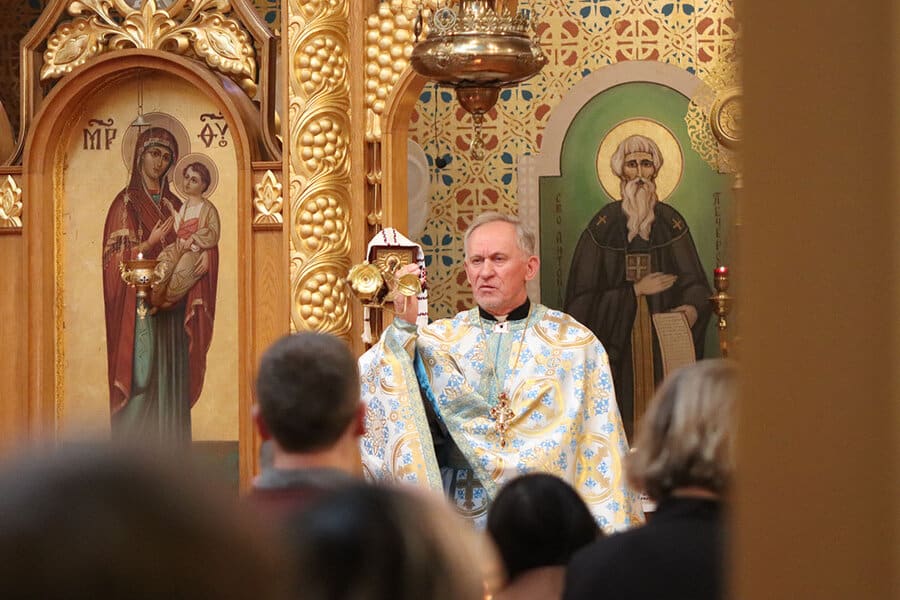 Alexander Thompson/The Christian Science Monitor
The Rev. Roman Tarnavsky of St. Andrew Ukrainian Orthodox Church in Boston swings a censer during the service on Feb. 27, 2022. The church was full, and many congregants dressed in blue and yellow, the colors of the Ukrainian flag.

Ukrainian Orthodox churches outside Ukraine were not granted autocephaly; they remain under Constantinople. But most align and identify with the independence movement in Ukraine.

“It’s our dream, our hope. We waited many centuries for this,” says the Rev. Vitaliy Pavlykivskiy of All Saints Ukrainian Orthodox Church in Manhattan, translated from Ukrainian to English by a church member after Sunday service Feb. 27.

And the issue is not just an obscure religious matter that happens behind closed doors, but part of the consciousness of average churchgoers like Alexander Dubok, who says his family members in Ukraine are struggling, but hopeful, and “very, very defiant.”

He adds: “We pray for the forces, for the army, for the reserve folks who are volunteering, including my brother.”

Though he’s been living in the U.S. for 26 years, he says the 2019 recognition of the Orthodox Church of Ukraine “means a lot.” Convening with his faith community has been a balm during this difficult week. “Faith is our tool, our weapon – in a good way,” he says.

In Ukraine, the issue of autocephaly has been more fraught. Ukraine is an overwhelmingly Orthodox Christian nation, with nearly 8 in 10 identifying as Orthodox, according to Pew Research figures. (A significant minority are Ukrainian Catholics, while there are also Protestants, Muslims, and Jews, including current President Volodymyr Zelenskyy.)

But there is a significant – and complex – split in the Orthodox community of Ukraine. The Russian church, known officially as the Ukrainian Orthodox Church of the Moscow Patriarchate, with its many adherents from diverse backgrounds, remained in Ukraine after 2019 and its churches actually outnumber those of the independent Ukrainian church by about 12,000 to 7,000, according to estimates Dr. Sysyn cites.

Yet in surveys on questions of identity, not parish affiliation, many more Ukrainians will say they recognize the national leadership as the highest authority. The grassroots faithful don’t necessarily view their parish as a reflection of politics on either the Russian or Ukrainian divide – it’s simply their parish.

The invasion of Ukraine could be a catalyst for more Ukrainians to break with the Russian church, hopes Mr. Pavlykivskiy. And that would backfire for Russia.

The Russian Orthodox Church has always viewed Kyiv as a “mother city,” after Prince Volodymyr, a warrior ruler of Kyivan Rus, the “cradle” of Russian civilization – brought Christianity to what is now Ukraine in the 10th century.

Claiming historical justifications for war in a Feb. 21 speech, Mr. Putin alleged that Kyiv was preparing “the destruction” of the Russian-backed Orthodox church in Ukraine – a Western attempt to betray Ukraine’s true, Russian, identity. But even that Russian-backed church’s leader has since compared the invasion to “the sin of Cain.”

The autocephaly issue is viewed on both sides as a reflection of the bigger struggle for Ukrainian independence that goes well beyond a distinct political or theological moment. 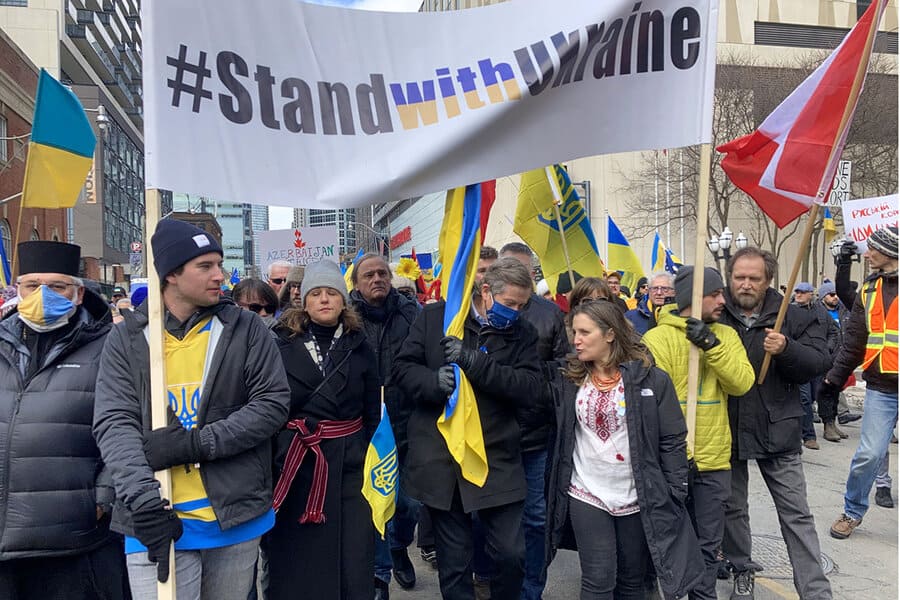 Sara Miller Llana/The Christian Science Monitor
A solidarity march for Ukraine in Toronto attracted thousands, including Toronto Mayor John Tory (in blue mask) and Canada’s Deputy Prime Minister Chrystia Freeland (right) who walked at the front of the protest alongside Ukrainian priests, as a steady mass behind waved Ukrainian flags and anti-Putin signs and chanted “Stand with Ukraine.”

“By pursuing relentlessly the path of independence, this was clearly a way for the church to remove any semblance of subordination to Moscow. It was really, in a certain sense, a firm and final rejection of Russian Orthodox governance,” says the Rev. Nicholas Denysenko, Emil and Elfriede Jochum professor at Valparaiso University in Indiana. “It was Ukrainians claiming their own Orthodox life, but it was also in a certain sense experienced and interpreted by Russians as an affront.”

At the end of the liturgy St. Volodymyr Ukrainian Orthodox Cathedral, Mr. Buciora tells the congregants about a march in Toronto that afternoon. It attracted thousands, including Toronto Mayor John Tory and Canadian Deputy Prime Minister Chrystia Freeland, who walked at the front of the protest alongside Ukrainian priests, as a steady mass behind waved Ukrainian flags and anti-Putin signs and chanted “Stand with Ukraine.”

But before, Mr. Buciora calls on the members of the church to head to downtown and join thousands of demonstrators supporting Ukraine. “If not us then who?” he asks the faithful. “If not now, then when?”