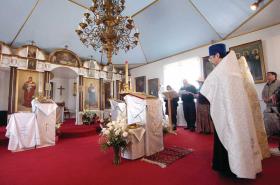 File Photo/Peninsula Clarion Father Thomas Andrew and others bless items inside of the Holy Assumption of the Virgin Mary Russian Orthodox Church in April 2010 before they were transferred to the Kenai Cultural and Visitors Center for a summer art gallery show while the church was being renovated. That project was phase one of the church’s three-phase project to completely renovate the church. The church is set to receive $230,000 from the Alaska State Legislature’s capital budget that would go toward fire and theft prevention systems, among other items, as part of phase two of the renovations.

Sitting at his dinner table, looking out his window at the Holy Assumption of the Virgin Mary Russian Orthodox Church, Father Thomas Andrew said he sometimes worries about the church he heads.

“Nobody knows if something is going to happen,” he said.

Currently, the church is protected from fire only by two fire extinguishers and the priest’s watch. But, a proposed $230,000 from the Alaska State Legislature could add a new fire protection system that would greatly ease Andrew’s mind, he said.

Dorothy Gray, secretary for the church, said the proposed $230,000 — not yet approved through Gov. Sean Parnell’s final capital budget — would fund installation of the fire system as well as a theft protection system. It would also go to construction of an outbuilding south of the church that would house a furnace, boiler, tanks for the fire system, a small gift shop and, perhaps most importantly, a bathroom.

“The church doesn’t have water because it is a National Historic Landmark, so there were a few things that could not be added to the church, which was installing plumbing,” she said. “That’s always been difficult for the parishioners, especially with children during our services.”

The funding is about half of what the church needs to complete all the items in the second of its three-phase restoration project that started in 2008. Phase one secured the church’s foundation with steel, replaced rotten logs around base of the structure, developed an Americans with Disabilities Act-compliant entry into the church and funded the design of the anti-theft and fire suppression systems, Gray said.

“As soon as the governor puts the ink on the paper, we’re shovel ready,” she said.

The church’s artifacts and religious icons that came from Russia when the site was consecrated in 1894 are irreplaceable, Gray said. One of the items is one of the oldest pieces of non-Native art in the state, she said.

It’s a godsend, Gray said, that the church hasn’t had any close calls with fire.

“We have candles burning all the time — we may have between 25 and 30 candles illuminated at any given service,” she said. “The chandelier is lit on Christmas and Easter with 50 candles burning.”

Gray said the ROSSIA (Russian Orthodox Sacred Sites in Alaska) group chose the Kenai church as a priority on its sacred sites list because of how much the church is visited. ROSSIA asked the Legislature for funding for seven churches in the state this year and Kenai was the only one that made the budget, said Gray, who is the group’s treasurer.

“We have had incredible support not only from the federal government, but now the state government and we have had a huge outpouring of support from our community,” she said.

Gray also credited the work of the area’s legislators, who she said unanimously supported the request.

“I went to Juneau twice and (Sen. Peter Micciche) was appalled that we didn’t have any fire suppression system or anti-theft system,” she said.

Moreover, Gray said the city of Kenai has been supportive of the restoration because officials recognize the importance of the church’s historic culture in the community.

“I think they also recognize that it is irreplaceable,” she said. “What we have here is so unique to the city of Kenai and we need to protect it. There are a number of historical sites in the state that have not been taken care of and they are gone.”

Kenai mayor Pat Porter agreed, adding that she felt church is “absolutely priceless” to the community.

“The thing we have to remember is that it is a part of our heritage and the city of Kenai and we’re very respectful of that and even though you have a separation of church and state, to us it is a historic building that deserves to be preserved,” she said. “Anything that we can do as a city to help promote that and encourage our legislators to support it financially, we will be there for that.”

Brian Smith can be reached at [email protected].