[ditty_news_ticker id="27897"] The Church of Russia, Prestigious and Growing 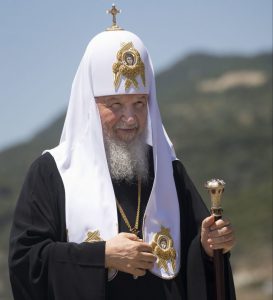 In this Friday, May 27, 2016 file photo, Patriarch Kirill of Moscow arrives to the port of Dafni, at Mount Athos, Greece. (AP Photo/Darko Bandic,file)

The emergence of the Russian Church has the largest and most prestigious Church in Eastern Orthodoxy, after seventy years of persecution by a brutal and atheist regime that killed thousands of its clergy and desecrated its places of worship, should be a matter of pride to the entire Orthodox world.

This accomplishment of the Russian Church, however,is not without troubling questions concerning its future posture and policies. Could the Russian Church, many skeptics wonder, encouraged by its newly gained power and prestige attempt to compete with Constantinople for influence over the Eastern Christian world; worse yet, challenge its leadership?

The Church of Russia is aware, of course, that “challenging” Constantinople for the leadership of worldwide Orthodoxy would devastate Orthodox unity, and ravage the Ecumenical Patriarchate already under extreme pressure from the Turkish authorities. Accordingly, it has no plans to do so.This does not preclude, however, the Church of Russia from“competing” for influence with Constantinople, whenever opportunities arise that might advance Moscow’s worldwide prestige and influence.

Moscow’s boycott of the Holy and Great Council (HGC), for instance,held last summer on the island of Crete,was one such instance. Although ostensibly the Russian Patriarchate opposed the Council because of its incomplete “preparations,”suspicion cannot escape that there was more to the Russian abstentionfrom the Council’s deliberations. At the end, the Russian Church’s absence from Crete deprived the Ecumenical Patriarchate of the prestige and power of having hosted the first Ecumenical Council after a thousand years, while also traumatizing its relations with the Churches of Bulgaria and Georgia.

There are additional reasons for the reluctance of the Church of Russia to outright “challenge” the Ecumenical Patriarchate, as opposed to merely “compete” with it. The bonds between Constantinople and Moscow go back a long way – to the year 988 to be precise – when Greek missionaries from Byzantium introduced Christianity to the people of the Ukraine.

During the centuries that followed, despite the ups and downs of history including the rise of the city of Moscow as the center of Russian national power, the people of Russia never rejected their roots, continuing to acknowledge Constantinople as their Mother Church and be dependent on it for leadership. Even during the years of communist rule, when religion was intensely persecuted by the regime, the links of the Russian Church to Constantinople remained intact

Facilitating this process is the fact that the authority lines between Constantinople and Moscow have been in existence for a long time, and except for an occasional instance, neither Patriarchate has attempted to violate them. The Ecumenical Patriarchate affords the Church of Russia and its Primate the honor and respect it deserves for being Orthodoxy’s largest autocephalous Church; and in turn, the Church of Russia looks to the Ecumenical Patriarch as the “first in honor” among all Primates of the Orthodox Churches in the East.

There are slight nuances, however, to this arrangement that tend to complicate matters at times. “First in honor,” Moscow emphasizes, does not imply that the Ecumenical Patriarch has powers comparable to those of the Pope – the Patriarch does not enjoy the jurisdictional power over the Churches in the East the way that the Pope does in the West. To which the Ecumenical Patriarchate responds in humility: “Yes, but Constantinople is the Mother Church of the East.”

Major problems occasionally surface, of course, that disturb the relationship between Moscow and Constantinople. Such is the case presently with the two Orthodox Churches in the Ukraine, the “Ukrainian Orthodox Church (Moscow Patriarchate),” which is the largest religious organization in the country, and the schismatic according to Moscow “Ukrainian Orthodox Church (Kyiv Patriarchate).”Requests by the political and Church authorities of the Ukraine that the Kyiv Patriarchate be granted autocephalous status by the Ecumenical Patriarchate, is causing huge displeasure in Moscow, even threats of a schism. Boxed in an awkward position is the Ecumenical Patriarch who has refused thus far the Ukrainian government’s request for autocephaly, while also stating that he is “praying that the Ukrainian people will be united in one Church.”

The Church of Russia is today unquestionably the most powerful of the fourteen autocephalous churches that make up the Orthodox East. With a total active membership of 100 million (estimates vary – the membership may be as high as 120 million) it ranks fifth in the Orthodox order of preference after the four original Patriarchates of Antioch, Jerusalem, Alexandria, and Constantinople.

The Church undoubtedly draws considerable power from the relationship that it maintains with the Russian state and its current President Vladimir Putin.

The arrangement, however, is hardly new, and should not be a cause of concern.Close relations between State and Church are an accepted institution in Russian society. State and Church were intermeshed during Russia’s Tsarist days, during the years of the so called “Great Patriotic War” against Germany (when the Russian Church actively cooperated with the Soviet government), and is now with President Putin.

Concerning the future, it would be useful if the Orthodox faithful worldwide (both lay and clergy) would cease looking to Moscow and its leadership with suspicion, and to fantasize Russian designs against Constantinople whenever issues arise that separate it from Moscow.

Maintaining and enhancing Pan Orthodox unity should be driving force in the relationship of Orthodoxy’s two largest Churches, for it is only through unity that the two can resolve the disputes that presently divide them. The alternative is too awful to contemplate: a badly fragmented and divided Orthodox Church, with distrust and suspicion characterizing relations between the fourteen Orthodox Churches, and Orthodox places of worship becoming progressively empty.

Dennis Menos is an author of several books and writes on Orthodox and Hellenic issues.