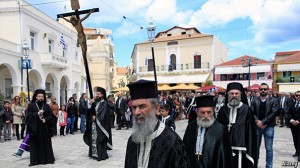 IN THE churches of this country’s second city, some of which date from the Byzantine era, there was a decent turnout of worshippers this morning for one of the most enigmatic and mystical rites of the Greek church calendar: a service commemorating the moment when the Virgin Mary, as a young girl, is said to have gone to live in the Jerusalem Temple and prepared to become a new kind of “temple” herself by carrying a divine child in her womb.

The liturgical poetry was reassuringly familiar, but there is nervousness in the chilly autumn air. Apart from the personal hardship that many church-goers are facing because of a lingering economic crisis, they face a new uncertainty in the coming months—the possible advent of a leftist government which is committed to separating church and state in what has hitherto been one of the most “theocratic” countries in Europe. If, as seems very possible, the current legislature fails to muster the necessary votes to elevate a new state president early next year, there will be early parliamentary elections, and the leftist Syrizaparty—led by a veteran of the communist youth movement, Alexis Tsipras—could well top the poll.

At full stretch, severing the connection between church and state would presumably mean: i) stripping the Orthodox church of its constitutionally guaranteed role as the “prevailing religion” in Greece; ii) ending the arrangement where priests and many other people who work for the church are on the state pay-roll; iii) tidying up and in some cases sequestering the church’s vast and ill-defined property portfolio; iv) putting a stop to the prayers and confessional instruction which are part of the daily diet for almost all pupils at state schools; v) ending all tax exemptions for religious institutions. Certainly there are plenty of secular leftists in Greece who would love to do all that. At a time when Greece’s old left-right fissures are widening again, there is lots of anti-clerical feeling among socialists who suspect the church leadership of colluding with the political right or even far-right. But in reality, say people close to the world of church-state relations, the old ties are loosening already and this process might not accelerate all that much under a hard-leftist government.

Already, under a conservative-led government, the rate at which priests are being ordained, and hence joining the state pay-roll, has slowed to a trickle—not for any ideological reason but because of internationally-mandated budget cuts. And the old practice of inculcating school-children with Orthodox Christian doctrine is giving way to something more like “religious studies” as classrooms fill up with migrants from places ranging from Albania to China.

And for several reasons, a Syriza-led government would hold probably hold back from a head-on confrontation with the church. One is that the church has played a big role in providing food, medicine and other basics to victims of the economic crisis who would otherwise be desperate; Syriza might not like that state of affairs, but it can’t be changed overnight. Another is that changing any part of the Greek constitution is a burdensome procedure—it can’t be done in the lifetime of a single parliament—and stripping out all the provisions which privilege the church and various monasteries would take an enormous amount of political energy and time. Yet another is that Greece has a small but modestly flourishing tradition of “religious leftism”—people who combine religious faith with radical political ideas—and that is one of the many impulses that Syriza seeks to harness.

A new biography (link in Greek) has just appeared of one of Greece’s better-known champions of the political left. A turbulent cleric called Father George Pirounakis who opposed the right-wing dictatorship of 1967-1974, supported student uprisings against the junta, and later demanded that bishops who had succoured the tyrants should be held to account. During the 1980s, he was temporarily suspended from ecclesiastical life because he agreed to help an initiative by a Socialist government that would have stripped the church of some of its land. By the end of his life in 1988, he was disappointed by the fact that church and state leadership had settled their differences by striking a cosy political bargain that left the property holdings intact. Such bargains have been struck many times in the past, and the chances are that there will be plenty more.