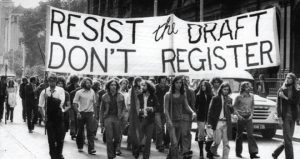 Fifty years ago, tens of thousands of young American men burned draft cards in public protests against the Vietnam War, while throngs of American women were burning certain items of clothing to encourage “women’s liberation.” If young women from 18 to 26 are compelled this summer by the U.S. Congress and president to register for Selective Service in another military draft someday, then a new resistance movement would be in order—this time women burning their selective service cards and refusing to comply with a U.S. defense policy that is both contra naturam and an offense against the divine order.

Without serious reflection on moral considerations, the very debate that will soon grip both houses of Congress indicates that America is nearing the bottom of a slippery slope that began in the shadow of the Vietnam War in 1973 with, ironically, the abandonment of all military conscription in favor of a new “all volunteer” military force. Only a few years later Congress mandated sex-integration at the service academies at West Point, Annapolis, and Colorado Springs, and the Department of Defense abandoned all the 1940s-vintage separate women’s auxiliaries. By this direct integration of women, both moves effectively undermined the venerable notion that all male citizens have the potential moral duty to protect and defend the nation—if necessary, in combatant warfare.

Henceforth, an “all-volunteer” (really “all-recruited”) force would be assembled by whatever enticements might work. No longer would the U.S. military comprise just sons and husbands and, if necessary, fathers of their families, bonded in community for the dutiful protection of their own beloved women and children, the transgenerational treasure of a civilized nation. The modern combatant force would contain willing young women, gradually older women, wives, sometimes the mothers of infants, sometimes mothers of service members, and sometimes even grandmothers. War had become a pseudo-family affair, with or without a husband or father even in sight.

We are already in the penultimate stage of a slippery slope to an ostensibly sex-less—though, in truth, obsessively “gender”-conscious—military. Through a toxic combination of relentless social activism, legislation, administrative policies, and silent acquiescence by our senior military leaders the American military structure and culture have gradually become fundamentally transformed. Whereas women were to be protected as “non-combatants” in the 1940s, now every military occupational specialty (MOS) is open to women who “qualify”—including the male bastions of combat infantry and armor, close-quarter submarines, the Army Ranger Regiment and Delta Force, and the vaunted Navy Seals. With women now eligible to serve in any military capacity anywhere in the battlespace—on land, at sea, or in the air—the final target of “gender-neutral” military activists is draft registration of women “equally” with men. In an international crisis that could entail actual conscription of men and women into the armed forces.

Thus the same Selective Service and military conscription that draft protesters and political liberals decried during the Vietnam era is, ironically, on the verge of indiscriminately compelling young women as well as men to register for a possible draft as a milestone of feminist-inspired egalitarian “enlightenment.”

Where are the traditional Christian and Jewish communities in the present crisis? The answer, for the most part, is AWOL—that is, “absent without leave.” In 1991, a Presidential Commission on the Assignment of Women in the Armed Forces solicited testimony from Christian leaders. The Commission’s report to President George H. W. Bush in November 1992 included this surprising remark: “Among the major religious establishments in the U.S., none has adopted a position regarding women being assigned to combat positions on the basis of theology. The Commission concludes that although the U.S. has an undeniably strong religious heritage, it is not one that speaks clearly on the issue of women in combat.”

Thus the Protestant, Roman Catholic, and Eastern Orthodox voices were mute, despite the increasing drumbeat for assigning women to combatant ships and aircraft and the celebration of trailblazing women who bear and trigger lethal force, perish or survive grave injuries in combat, and earn promotions to positions of ever increasing authority over male soldiers, sailors, airmen, and marines. The women whom God the Holy Trinity has ordained as humanity’s life bearers and nurturers are increasingly proficient in the military arts of volitional, professional life-taking. Worse, many are demanding recognition of their absolute identity with men, despite the human biology under divine provenance, while men in authority are yielding, not always joyfully, but “not knowing a good (enough) reason why not.”

The social transformation of woman from life-bearer to killer, protected by law since the Supreme Court’s infamous Roe v. Wade abortion decision in 1973, has been aided and abetted by men in Congressional and military authority, by fathers and husbands, and by the duly ordained male Christian priests and ministers in America through silence and, therefore, tacit consent.

The trajectory of social change seems inexorable with no compelling argument to dissuade men from abdicating the venerable vocation of manhood itself—nor a religious community that speaks clearly on the issue of women in combat.

Fortunately, we can point to the moral clarity of a widely revered saint of the undivided Church in the fourth century—St. John Chrysostom, Archbishop of Constantinople, greatest preacher of his era, and, as it happens, the son of a military officer in Byzantium. In his fifth homily on the Epistle of the Apostle Paul to Titus, he prophetically condemned the indecency of treating women as if they were men:

Woman was not made for this, O man, to be prostituted as common. O you subverters of all decency, who use men, as if they were women, and lead out women to war, as if they were men! This is the work of the devil, to subvert and confound all things, to overleap the boundaries that have been appointed from the beginning, and remove those which God has set to nature…. You suffer women to bear arms, and are not ashamed.

It may be unfashionable today to extoll the unique, complementary characteristics and duties of men and women as created by God the Holy Trinity, but we ignore, much less defy, them at our peril before the God, in whom we ostensibly trust, as a people. There is no manly virtue in causing or intentionally allowing the inherent beauty and charm of young womanhood to be grievously disfigured by the physical and psychic wounds of war. Nor is there any moral imperative that obliges an infant daughter to surrender her mother for long deployments, or forever as a casualty of war. Perhaps the Christian sage and veteran soldier, C.S. Lewis, had that in mind when, in The Chronicles of Narnia, “Father Christmas” instructs Lucy not to fight in the battle, because “battles are ugly when women fight.” By what high principle might honorable, kind, and loving men enroll women in the armed forces, especially against their own will via conscription, to kill and be killed on their behalf? Boys and girls, juveniles, depend on women, their mothers, to guard and protect them. It inverts the natural and divine order when grown men do so.

If the U.S. Congress and President Obama collude this year to require all young women in America to register with Selective Service, there will be no need to wait for an exigency that might compel the federal government to reinstate the military draft. The moral abasement of the U.S. armed forces would, in principle, already be complete. With that scenario in view, we propose that traditional Christians consider an uncharacteristically radical, proactive course of action.

As retired U.S. military officers, we recall with great joy the opportunity to serve our fellow Americans by responding, freely and without reservation, to the call to military duty. During our respective careers each of us had a distinct role in the adjudication of requests of soldiers or sailors to be discharged from military service as “conscientious objectors”—one as a chaplain tasked with ascertaining the sincerity and moral consistency of each applicant’s convictions, and one as a commanding officer to forward up the chain of command his decision for or against an applicant’s claim. The criterion for CO status is straightforward: “A firm, fixed, and sincere objection to participation in war in any form or the bearing of arms, by reason of religious training and/or belief.”

If our federal government mandates that young women, without exception, register with Selective Service against their will, with a foreseeable possibility of conscription into the profession of arms, there will be fresh justification for conscientious objection—on both moral and religious grounds—by men as well as women to refuse to bear arms in a military force opposed to the divine and natural order of creation itself. For the sake of moral integrity, and for the providential welfare of this “one nation under God,” we are dedicated to stand with such women and men. And we earnestly appeal to all Christian authorities to acknowledge the enormity of this national crisis and to take the same stand.