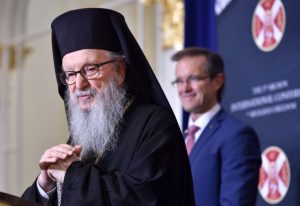 BOSTON, MA – His Eminence Archbishop Demetrios Geron of America sent to the Ecumenical Patriarchate the List of Candidates for Election to the Episcopacy or to be eligible for election to the Metropolis of Chicago, exactly as Patriarch Bartholomew and the Synod had requested.

The List is divided into four categories: the first consists of the archimandrites, the second of widower priests, the third of active metropolitans of the Archdiocese and the fourth of those who previously served the Archdiocese and now are metropolitans in Ecclesiastical Eparchies of the Ecumenical Patriarchate abroad, namely, Sotirios of Toronto and All Canada, Nikitas of Dardanelles, Athenagoras of Mexico, and Cleopas of Sweden.

The next step is that the List will be approved by the Synod at its regular meeting on January 9. It will be returned to the Archdiocese where the archbishop will convene the Holy Eparchial Synod to select the triprosopon – the three-person ballot that will be sent to the Patriarchate, whose Synod will make the final election with all probability at its February 8 meeting.

It is reminded here that Archbishop Demetrios had created a big issue with the subject of the List, because initially he had refused to comply with the Patriarchate’s directive.

Oddly, he justified his refusal by a report issued by attorneys, which the Patriarchate rejected as “unacceptable,” as TNH had revealed. That document’s authors cited U.S. law in their reasoning. Among those who had signed that document were VP Archdiocesan Council Vice Chair and Leadership 100 Chair George Tsandikos, who is also an archon of the Patriarchate.

The way the list is now structured, candidates can be all active Archdiocese metropolitans based on the method of transfer known as “metatheton” in ecclesiastical language.

TNH has learned that Metropolitan Nicholas of Detroit would like to move to Chicago. Currently, he serves as locum tenens of the Chicago Metropolis. If Nicholas is not the choice, it might be Nikitas, who is said to be Patriarch Bartholomew’s choice.

Those in the know speculate that the actual election may be delayed so that it would take place under a new archbishop.

As past events have indicated, developments at the Archdiocese are often unpredictable.