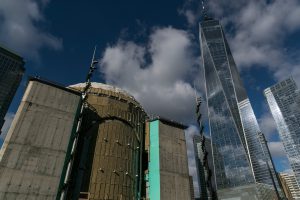 Construction work has stopped on the St. Nicholas Greek Orthodox Church in Liberty Park, just south of the 9/11 Memorial Plaza in Manhattan. Credit Jeenah Moon for The New York Times

Sixteen years after the St. Nicholas Greek Orthodox Church was destroyed in the terror attacks of Sept. 11, its reopening at the World Trade Center site remains frustratingly out of reach.

The latest setback to the project came this month, when Skanska U.S.A., the construction company rebuilding the once-simple church into a luminous, Santiago Calatrava-designed shrine, ceased work at the site in Liberty Park, just south of the 9/11 Memorial Plaza. The Greek Orthodox Archdiocese of America, despite receiving $37 million in donations for the shrine, was unable to pay its bills, the company said.

“Effective Dec. 5, 2017, Skanska USA has terminated its contract with the Greek Orthodox Archdiocese of America on account of GOA’s defaults in making payments,” Thomas Perry, the director of the project, wrote in a letter distributed to subcontractors, telling them to collect their equipment. “Skanska is demobilizing from the project site.”

Behind the failure to pay is the story of a religious organization that took on the logistical and financial challenge of building a national shrine at the World Trade Center site to the highest standards of international design, only to become saddled with ballooning costs, and an internal crisis within the archdiocese caused by what leaders now acknowledge was financial mismanagement.

The result has been a breach of trust among many of the 1.5 million parishioners of the Greek Orthodox Archdiocese, the archdiocese has itself acknowledged, as wealthy donors and humble parishioners alike wonder whether their donations were used appropriately.

“It is a very critical time for the archdiocese, the finances of the organization are in a dire condition,” said Theodoros Kalmoukos, the religion editor for The National Herald, a Queens-based publication covering Greek news. “The archdiocese needs a new beginning, new vision.”

How costs spun so high will be examined in an independent investigation and audit ordered by the archdiocese in November, the archdiocese said in a statement. PricewaterhouseCoopers and BakerHostetler have been retained to conduct the inquiry.

“In addition, the archdiocese will re-evaluate its fund-raising strategy moving forward and will continue to explore ways to cut costs, concurrently maintaining the historic vision of the church,” the statement said.

The acute funding shortfall followed the October 2016 revelation that the archdiocese, which is based in New York and represents 540 parishes nationally, was suffering from a “severe and complex financial deficit that had been building for several years,” according to a statement the archdiocese released last fall.

His Eminence Archbishop Demetrios, the 89-year-old leader of the archdiocese, was quoted in the statement as saying that until October 2016 he and others had been unaware of the organization’s financial condition. “We were utterly surprised and saddened by the deficit, and by its unexpected nature,” he said.

In an effort to bring greater accountability and transparency, a chief financial officer was hired, and a new treasurer, Michael Psaros, told the archdiocesan council this October that the crisis had been caused by “a deficiency in proper internal controls.”

Of particular concern, Mr. Psaros reported, was that the archdiocese had transferred $4.75 million from “restricted and custodial accounts” to cover a shortfall of $4 million to $5 million in the 2017 general operating budget for the archdiocese.

A spokesman said that the investigation would find whether donations earmarked for the St. Nicholas Shrine were among those raided for general expenses. But internally, it has already been acknowledged.

In a December letter, Father Alex Karloutsos, the director of public affairs at the archdiocese and the shrine’s main fund-raiser, assured donors that “there will be investigations into how funds were transferred from the St. Nicholas account and let there be no doubt that they will be returned.”

“You have trusted me with your precious resources, your confidence and your friendship,” he told them. “I will not let you down.”

Some members of the church have called for the archbishop to be removed.

“The faithful have lost trust in this archdiocese and this archbishop,” said Gregory C. Pappas, the publisher of The Pappas Post, and a former member of the archdiocesan council. “Some parishes are not giving their annual dues to the archdiocese. Individuals are not donating anymore.”

Steve Stratakos, a commercial real estate appraiser based in Illinois, said his charitable organization, the Pan-Icarian Brotherhood, had been approached for donations for the shrine but declined. Without greater transparency, he said, there is no way to know whether the project was being managed appropriately.

“The feeling out there among the rank-and-file now is that this project was used as a cash cow for the archdiocese, which has been hemorrhaging money for years now,” he said. “It outraged me. You have that beautiful site down there at the Trade Center, and that thing might sit there like a rotted tooth for the next five years.”

The archdiocese said in an email that it was hopeful that construction would resume as early as the spring. It added that design work and the construction of skylights and parts of the marble and glass-fused curtain-wall and lighting system that will ultimately allow the church to glow at night were continuing off-site.

Before the Sept. 11 attacks, the modest four-story St. Nicholas Shrine was located at 155 Cedar Street and had fewer than 100 affiliated families. After its destruction, the denomination was determined to rebuild it as a testament to faith. After years of negotiation, the Port Authority of New York and New Jersey in 2011 gave the church the current site at the eastern end of Liberty Park, where it will be the only house of worship at the World Trade Center. The archdiocese signed a 198-year lease for the nominal rent of $1 a year.

Archdiocesan officials said they believed that once the investigation was complete, trust would be restored and the project would move forward with transparency and accountability.

“The Archdiocese remains committed to the rebuilding of Saint Nicholas and we are confident that our fund-raising efforts to support this important project and ministry will be successful,” His Grace Bishop Andonios, chancellor of the archdiocese, said in a statement last week.

A version of this article appears in print on December 28, 2017, on Page A18 of the New York edition with the headline: Work Is Halted on Shrine At World Trade Center Site.