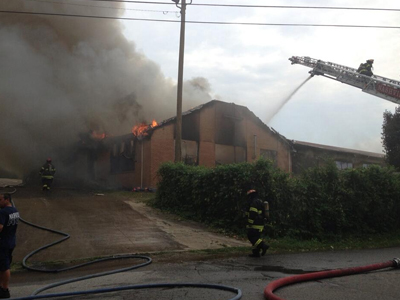 Firefighters were called out to St. Mary Coptic Orthodox Church, in the 1900 block of Dabbs Avenue, around 3 p.m.

The first crews arrived to find flames shooting from the building, and a huge plume of smoke was visible for miles around. Fire officials said the blaze started in the kitchen, and spread quickly. There were people inside the church when the fire broke out, but no one was hurt.

High temperatures Sunday afternoon created serious challenges for firefighters. More than 75 fire personnel worked to contain the fire. Crews were rotated out frequently, and sent to a rehabilitation center where paramedics checked their vital signs and gave them water and Gatorade to drink.

“The heat was extreme,” said Walter Demonbreun, the District 29 Fire Chief. “There were high temperatures inside, and heavy smoke. Firefighters did good rotating in and out and keeping hydrated.”

Some of the church’s estimated 500 members gathered at the scene to see what happened.  Many said it was heartbreaking watching the building go up in flames.

“It was kind of overwhelming at first, to see so many people we know, and wondering if people we know might be hurt,” said Bahy Habib, a church member. “We are going to wait and see what is going on and hope for the best.”

Neighbors also stood on their front lawns and watched the fire in amazement.

“I looked outside, and it was all smoke,” said Italy Hernandez.  “You couldn’t see anything.  I was scared because it was right next to my house, and I thought my house was going to burn.”

Firefighters remained on the scene hours after the blaze broke out monitoring hot spots.  The cause of the fire remains under investigation, which officials said would be challenging because the roof collapsed in the area where the fire began.

The church’s priest had no comment on the fire or plans to rebuild.