[ditty_news_ticker id="27897"] E.J. Dionne: Questioning our questions[What holiness needs to look like in the 21st century] 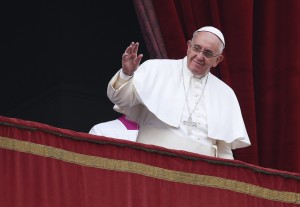 Pope Francis waves as he delivers a “Urbi et Orbi” (to the city and world) message from the balcony overlooking St. Peter’s Square at the Vatican December 25, 2014. (Alessandro Bianchi/Reuters)

It is a mark of our pluralistic moment that I learned of an old joke among rabbis from the writings of a great Christian scholar, Jaroslav Pelikan.

In his book “Jesus Through the Centuries,” Pelikan tells the story of a rabbi who is challenged by one of his pupils: “Why is it that you rabbis so often put your teaching in the form of a question?” To which the rabbi replies: “So what’s wrong with a question?”

Trying to imagine what will matter in a new year is daunting, but it takes no clairvoyance to see that in 2015, one of the struggles around the globe will be between those who acknowledge that religion is as much about questions as answers and those who have such a profound certainty about their answers that they will kill in the name of the divine.

To cast the matter this way, I know, invites dissent from both believers and nonbelievers. The believer can plausibly argue that you can be utterly certain about the truth without killing anyone. Nonbelievers might note that both halves of my formulation undercut religion. If religion is primarily about questions, what truth can it contain? And if it preaches certainty, where is the space for dissent and dialogue?

Holding on to faith’s middle ground — what my friend Arnie Eisen calls “moderate religion” — is one of the most important tasks in the world now. Eisen, chancellor of the Jewish Theological Seminary, is not referring to a faith that is weak or tepid. Rather, he thinks that all traditions need to recognize the radically new situation in which they find themselves.

“The job market is global, and so is the thought-and-values market,” Eisen said in a lecture in November in Jerusalem. “It is more difficult for ‘The People of the Book’ to sustain the belief that it is in any meaningful sense ‘The Chosen People’ — or is ‘the’ anything — because an unlimited diversity of claims is literally in our face every time we look at a screen on a laptop or smartphone.”

Admitting this does not produce all the answers, but, as the rabbi in the story might say, it does lead to the right questions.

My hunch is that Pope Francis’s understanding of Eisen’s point has much to do with his worldwide popularity. A recent Pew survey across 43 nations found Francis with a median favorable rating of 60 percent and an unfavorable rating of just 11 percent.

Political consultants would love to have access to the pope’s secret sauce. Some of the ingredients are clearly personal: Francis conveys the reflectiveness of a holy man and the compassion that most hope religious engagement encourages. But he also manages to juggle the imperative of making tough judgments, especially about injustice and poverty, with an awareness that justice without mercy and understanding (“Who am I to judge?”) lacks both humanity and the sense of a God whose most important characteristic is mercy.

By simultaneously conveying a certainty about what his faith teaches him and a confident openness to those who are seeking answers along other paths, Francis gives an intimation of what holiness needs to look like in the 21st century.

One of my favorite political acts at the end of 2014 was the Senate’s confirmation of Rabbi David Saperstein as the State Department’s ambassador-at-large for international religious freedom. I admire Saperstein for many reasons, but why I think he is perfect for his new job was illustrated during his 2004 visit to my Religion and Politics class at Georgetown University.

It was around the time that Mel Gibson’s “The Passion of the Christ” was released. Saperstein had been a sharp critic of what he (and many others) saw as anti-Semitic tropes in the movie. But several of my students had appreciated the film. Rather than launch into an attack on Gibson’s work, Saperstein invited them to have their say.

When he finally did express his view, Saperstein began with these words: “If you believe that the birth of Jesus Christ is the most important event in human history, you cannot help but be moved by this movie.” Only then did he offer his critique.

Religious freedom will thrive and religion itself will be a force for good only if religious people can convey this sort of empathetic understanding of the truths that others hold dear. In faith as in science, finding the right answers inevitably involves questioning our own questions.