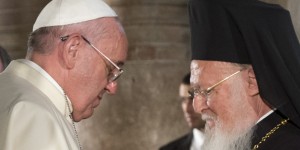 Ecumenical Patriarch Bartholomew I of Constantinople underlined the importance of ecumenical ties with Rome, and criticized the resistance of the Russian Orthodox Church, in an August 29 address.

The Ecumenical Patriarch—recognized as the “first among equals” of the world’s Orthodox leaders—stressed the primary importance of ecumenical affairs, and reiterated that his role involves “protecting the unity of the whole Orthodox Church.” He said that opposition to ecumenical unity reflects a “diabolical” impulse.

Patriarch Bartholomew said that his continuing contacts with the Holy See are a critical component of his ecumenical work. He expressed his enthusiasm for the planned worldwide Orthodox council, but conceded that it cannot accurately be described as an ecumenical council “because Western Christians are not invited to participate as members.” The Ecumenical Patriarch—who has frequently sparred in recent years with the leaders of the Patriarchate of Moscow—clearly appeared to be criticizing the Russian Orthodox leadership when he spoke critically about Orthodox bodies that “maintain intimate connections with the government of their land and enjoy abundant financial support,” and advance the political interests of their nations.