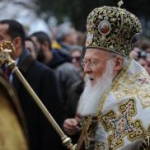 ISTANBUL (AMNA) – The Ecumenical Patriarchate criticized the “intervention” by the Patriarch of Moscow in its affairs through statements and demarches made in favor of Vatopedi Monastery abbot Ephraim, reiterating that Mt. Athos belongs under the Church of Constantinople’s jurisdiction.

An announcement issued at the Phanar after Tuesday’s meeting of the Synod stresses that Mount Athos is “normal territory” of the Ecumenical Patriarchate.

“It is comprised indeed of Orthodox monks of various nationalities, this however in no way attributes to it a pan-Orthodox character, allowing intervention of any kind in it by other Autocephalous Churches”. The announcement was issued following the discussion of “the issue of the remanding in custody of Vatopedi Holy Monastery abbot Ephraim.”