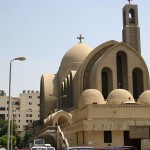 CAIRO (AP) — Christians gathered Friday in front of a Cairo cathedral holding signs denouncing a film that mocked the Prophet Muhammad amid fears that Muslims will take out their anger on Egypt’s minority community.

The country’s 8 million Coptic Christians were already feeling increasingly cornered amid the rise to power of hard-line Islamists in Egypt following the ouster of Hosni Mubarak.

Now U.S. authorities have identified a self-described Coptic Christian living in California as the key figure behind the inflammatory film, and the community at home fears it will bear the brunt of the blame.

“We are afraid the anger will engulf us,” said Monier Hanna, a 58-year-old Coptic government employee who says he saw two unveiled Christian women being harassed over the movie by Muslim men in his middle-class district of Helwan on Thursday.

“They were telling the women they are responsible for the film,” he said.

“I can’t go to church alone; my brother must be with me. I can’t go out at night. When I return from work, a male — either my father or brother — must be waiting for me at the subway station,” she said. “Being a Christian … is hard in Egypt in these conditions.”

A Christian journalist, Caroline Kamel, wrote in the Shorouk daily Friday that she and her family came under attack at a bus terminal in Cairo and another city over the film. “Am I supposed to … apologize for stupidities of others just for the mere fact that we share the same religion?” she said.

In another sign of trouble, a young Coptic Christian blogger, Alber Sabry, reportedly posted a clip of the movie on his Facebook page, prompting threats Friday from his neighbors in the middle-class district of Marg, who vowed to set his house on fire, a security official said.

The neighbors notified police, who arrested the blogger and detained him for 15 days pending investigation, said the official, who spoke on condition of anonymity because he wasn’t authorized to speak to the media.

The 14-minute clip of “Innocence of Muslims,” which denigrates Islam and the Prophet Muhammad, portraying him as a womanizer, a fraud and a child molester, has unleashed protests across the Muslim world and attacks on U.S. and other Western embassies, including one in Libya that killed the U.S. ambassador and three other Americans.

Egypt’s Islamist politicians have lashed out at Coptic Christians living abroad but say they won’t let the film cause sectarian hatred at home. But that has not eased fears among Egypt’s Copts that anger over the film will spill over into broader anti-Christian sentiment.

On Tuesday, as the first anti-American protest was surging in front of the fortified U.S. Embassy in Cairo, mainly by hard-line Islamists, an extremist cleric, Abu Islam, drove up and announced over a loudspeaker that he had set fire to a Bible.

The Coptic Christian Church has issued a statement denouncing the film and rejecting “defamation” of the Muslim faith, and church officials have pledged that Christians will join their “brotherly Muslims” in sit-ins against the movie.

“This is part of a wicked campaign against religions, aimed at causing discord among people, especially Egyptians,” read the statement, issued Wednesday by the Sacred Congregation of the Coptic Church.

Once a majority in Egypt, Coptic Christians now make up about 10 percent of the country’s 85 million people. They are the largest Christian community in the Middle East, and theirs is one of the region’s oldest churches. Like the Greek Orthodox and Russian Orthodox churches, it has no theological links with the Roman Catholic or Anglican churches.

Under Mubarak, Christians also faced discrimination by the government, which did little to prevent attacks by Muslims. Many Christians fled to the United States and other Western countries, and tensions have risen as the collapse of the police state gave way to a state of lawlessness and the Islamists assumed power.

With Egypt’s first free elections in history giving victory to the Muslim Brotherhood’s Mohammed Morsi, fears have risen among Christians, many of whom supported his rival, a pro-Mubarak official, Ahmed Shafiq.

On Friday, a dozen young Coptic Christians lined up outside Cairo’s St. Mark’s Cathedral, denouncing the film and displaying signs that read “No to harming religions.” Christians also joined a sit-in against the movie at a mosque in Giza.

Some pointed to such demonstrations by Copts as a sign that they feel confident that anger over the film won’t be taken out on them.

“There is no doubt that Christians are fully confident that they will not be affected, as they are expressing solidarity with Muslims in their protests,” said Fouad Gergis, a member of the secular council of the Coptic Church.

However, Coptic activists counter that Christians in Egypt will feel the heat sooner or later.

“Christians are worried and I anticipate more waves of immigration to the West,” said Medhat Kelada, head of Copts United, a Swiss-based group that monitors reports of discrimination and other abuses against Christians in the Middle East.