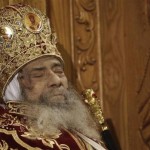 The body of Pope Shenouda III, the head of Egypt’s Coptic Orthodox Church, is displayed for public viewing inside the Abbasiya Cathedral in Cairo March 18, 2012. REUTERS/Amr Abdallah Dalsh

Egypt’s Coptic Orthodox Church will choose a new pope on December 2, after Pope Shenouda who led the church for four decades died in March and left many Christians worrying about their rights under an Islamist-led government.

Many Christians, who make up about tenth of Egypt’s 83 million people, are concerned by the rise of Islamists who swept to power in parliamentary and presidential elections.

President Mohamed Mursi has insisted he will be a leader for the whole nation, but some Christians fear a creeping imposition of conservative religious codes on society.

Egypt’s state news agency, citing a church official responsible for overseeing the papal election, said 2,405 voters were eligible to cast ballots on November 24 after a list of up to seven candidates was drawn up on October 4.

The vote would whittle the candidates down to three. Then on December 2, the pope would be picked using a traditional method where a young child picks one of the names from a box.

Pope Shenouda had acted as both a spiritual leader and the main political advocate for the nation’s Christians.

Christians have long complained of discrimination in Egypt, citing laws that make it easier to build a mosque than a church and complaining of second-class treatment when they seek government jobs or promotion in state institutions.

Mursi was propelled to power by the Muslim Brotherhood, which was repressed and banned under former leader Hosni Mubarak who was ousted last year.