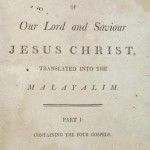 The 200th anniversary of the first translation of the Bible into Malayalam will be celebrated by the Malankara Orthodox Syrian Church in Thiruvananthapuram on Tuesday.

Church historians say Philipose Ramban, a scholar from Kayamkulam, translated the Bible from Syriac into Malayalam in 1811 to help the faithful get a better understanding of the scripture.

Claudius Buchannan, a missionary who toured South India in the early 19th century, persuaded the Ramban to translate the holy book.

The Orthodox Church authorities in Travancore gave Buchannan, during his visit to Kerala, a copy of the Bible in Syriac, known in local parlance as Suriyani.

Buchannan told them to translate the Syriac text into Malayalam and gave guidance to some local Syriac and Tamil scholars to undertake the task.

For centuries, Syriac had been the liturgical language of Christians in Kerala, who believe that St. Thomas the Apostle preached the Gospel in Kerala.

D. Babu Paul, former Additional Chief Secretary and scholar of Christian literature, says the Ramban had worked hard for the translation as he had no model before him to follow.

“Four Gospels translated by the Ramban made up the first version of the Bible, which appeared in the book format in Malayalam. The translation was completed in 1811 and printed in ‘Kallachu’ (lithographic printing) at a press in Bombay (now Mumbai),” Dr. Paul says.

The book, composed in a hybrid language of Malayalam and Tamil, was titled Visudha Veda Pustakam. The faithful used to call it the Ramban Bible for long.

Before the Malayalam version, the Bible had been translated into Tamil and Bengali, historians say.

It took two more decades after the appearance of the Ramban Bible for Malayalam to get a comparatively complete version of the scripture.

Dr. Paul says the missionary-scholar Benjamin Bailey produced another Malayalam version of the Bible in the 1840s with the help of Chandu Menon, a tahsildar in the Madras State service.

Herman Gundert, German scholar, who compiled the first lexicon in Malayalam, translated the New Testament in the 1850s.

“One major difficulty in translating the Bible in the earlier centuries was the absence of an accepted prose literary form in Malayalam. People of various communities used to speak varying dialects in different places. There was a deep influence of Tamil in the early translations,” Dr. Paul, author of a comprehensive work on Biblical literature, says.

A book containing a collection of studies regarding the contribution of the Ramban, edited by M. Kurian Thomas and titled Kayamkulam Philipose Remban – Vayakthium Sambhavanaum, will be released by Perumbadavam Sreedharan, Chairman, Kerala Sahithya Akadami, at VJT Hall Thiruvananthapuram, at 11. 30 a.m. on Tuesday. — PTI