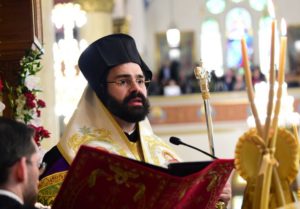 CHICAGO – The Greek Orthodox Metropolis of Chicago announced the enactment of a series of policies and decisions designed to provide for greater transparency, accountability and communication in its operations, ministries and finances.

The actions were introduced by His Eminence Metropolitan Nathanael during his first 100 days as the newly enthroned Metropolitan and approved and/or implemented by the newly formed Metropolis Council.

“The Orthodox faithful have long supported the Church with their time, talent and treasure, in good and tough times, and have made their concerns and expectations clear to me,” His Eminence Metropolitan Nathanael said. “It is extremely important to me as Metropolitan that the Church continues to lead by example and serves the faithful with mercy and humility. While we have more work to do, I believe these decisions are important steps to make good on that promise.”

Among the new policies and decisions:

• An enhanced delegation of legal and financial authority policy, which imposes new internal controls over long-term contracts, expenditures, management of funds, compliance and budget approval, among other areas;

• Approval of funds to retain an independent accounting firm to conduct an audit of the Metropolis’ finances for calendar years 2015-2017;

• Formation of 12 Metropolis Council standing committees, including the Baselining and Ministries Committees, which will work together closely to evaluate, measure and augment the holistic life of the Metropolis, and

• Implementation of a 12-week “Listening Tour” of Metropolis parishes in Illinois, Indiana, Iowa, Minnesota, Missouri and Wisconsin to allow His Eminence to meet parishioners face to face, hear their concerns and articulate his long-term vision for the church in the Midwest.

“Beyond implementing new controls, we also are moving forward to learn more about how the Metropolis operates and what parishioners think, feel and believe about its present state and future direction, His Eminence continued. “The findings from this process will be incredibly important to ensure the words and deeds of the Metropolis are consistent and help us all walk with Christ.”

In the coming months, the work of the Baselining Committee, as well as two separate task forces undertaking an evaluation of Metropolis assets, will conclude with recommendations being made to the Metropolitan and the Metropolis as a whole.