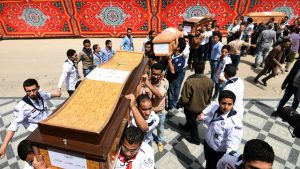 Twelve seconds of silence is an awkward eternity on television. Amr Adeeb, perhaps the most prominent talk show host in Egypt, leaned forward as he searched for a response.

“The Copts of Egypt … are made of … steel!” he finally uttered.

Moments earlier, Adeeb was watching a colleague in a simple home in Alexandria speak with the widow of Naseem Faheem, the guard at St. Mark’s Cathedral in the seaside Mediterranean city.

On Palm Sunday, the guard had redirected a suicide bomber through the perimeter metal detector, where the terrorist detonated. Likely the first to die in the blast, Faheem saved the lives of dozens inside the church.

“I’m not angry at the one who did this,” said his wife, children by her side. “I’m telling him, ‘May God forgive you, and we also forgive you. Believe me, we forgive you.’

“‘You put my husband in a place I couldn’t have dreamed of.’”

“How great is this forgiveness you have!” his voice cracked. “If it were my father, I could never say this. But this is their faith and religious conviction.”

Millions marveled with him across the airwaves of Egypt.

So also did millions of Copts, recently rediscovering their ancient heritage, according to Ramez Atallah, president of the Bible Society of Egypt which subtitled and recirculated the satellite TV clip.

“In the history and culture of the Copts, there is much taught about martyrdom,” he told CT. “But until Libya, it was only in the textbooks—though deeply ingrained.”

The Islamic State in Libya kidnapped and beheaded 21 mostly Coptic Christians in February 2015. CT previously reported the message of forgiveness issued by their families and the witness it provided.

“Since then, there has been a paradigm shift,” said Atallah. “Our ancestors lived and believed this message, but we never had to.”

Copts date their liturgical calendar from 284 AD, the beginning of the Roman persecution under Diocletian. Troubles with pagan and Muslim rulers have ebbed and flowed over time, but in his Easter message Pope Tawadros lauded the Coptic Orthodox as a “church of the martyrs.”

This history returned with a vengeance in 2010, when the Two Saints Church in Alexandria was bombed on New Year’s Eve. Copts poured out into the streets in anger, presaging the Arab Spring. In the months that followed, Muslims rallied around them and defended their churches.

Nearly seven years later, the nation has grown weary. The Palm Sunday twin suicide bombings killed more than 45 people and are the second ISIS attack on Christian sanctuaries in five months. Twenty-nine people were killed in a suicide bombing at the papal cathedral in Cairo in December. This week, ISIS attacked the famous St. Catherine’s monastery on the southern Sinai peninsula.

All three Christian denominations canceled Easter Sunday festivities, and the Orthodox postponed the reception of condolences. The state declared a three-day period of mourning and held an Easter service for the injured in a military hospital. Muslims reacted in shock and sympathy.

But while signs flutter in public squares about national unity, the visible outpouring of solidarity appears far less.

The atmosphere has changed, said Amro Ali, a Muslim assistant professor of sociology at the American University in Cairo (AUC).

“Among everyone there is now a sense of melancholy,” he said. “The bombings are part of a larger trend where things are just crumbling.”

Following the bombings, the government reimposed a state of emergency (in effect almost every year since the 1980s), expanding police and military powers. Ali connected the mood to the crackdown on activists and the deteriorating economy, but said the Coptic state of depression was more acute.

Many Christians supported current President Abdel Fattah al-Sisi after the popular military overthrow of the Muslim Brotherhood-aligned President Mohamed Morsi in the hope they would be protected, he said. However, such support has not been provided.

But even in death, the Copts forgive.

For example, the night of the bombings, Orthodox priest Boules George said he thanks and loves those who did this crime. Speaking to a congregation in Cairo’s Cleopatra neighborhood, his words were broadcast on the popular Coptic TV station Aghaby.

“I long to talk to you about our Christ, and tell you how wonderful he is,” said George, addressing the terrorists. But then turning to the church, he said, “How about we make a commitment today to pray for them?

“If they know that God is love and experience his love, they could not do these things—never, never, never.”

Clearly the Coptic heritage and Jesus’ teaching have an impact on the aggrieved. But will the “never” ever come? Is the scandal of forgiveness wasted?

Forgiveness is necessary for the individual to overcome the pain of trauma, said Ehab el-Kharrat, a licensed psychiatrist, former member of parliament, and an elder at Kasr el-Dobara Evangelical Church (KEDC) in Cairo. But the traumatic impact and subsequent forgiveness have also overcome Coptic lethargy, reviving the church.

“The Coptic community is definitely in defiance,” he said. “The services of Holy Week have doubled in attendance, and the churches are flowing out into the streets.”

Under heavy security presence, the traditional Easter Eve service passed peacefully. As per Orthodox tradition, priests in a darkened sanctuary quietly reenacted the Resurrection with an icon of the buried Christ. Previously entombed on Good Friday, light then burst forth as the curtain to the altar was opened and an icon of the risen Christ was paraded through the church.

But the Coptic defiance is not only against an enemy outside, according to Bishop Thomas of Qusia. It is also against the Enemy within.

The Libyan martyrs were a turning point, he said, as Copts watched the victims call out to Jesus in their moment of death. In his Orthodox diocese 170 miles south of Cairo, many have since repented of sin and changed the focus of their life, making faith a priority.

“Martyrdom is linked to the Christian life. To carry your cross and follow him,” said Thomas. “Since we are united to Christ, in this life we are his image.

The martyrs have set an example, he said, but have also left a great responsibility to the church. Christians must fight fear, keep their joy, and strive for justice. While the struggle is not against flesh and blood, forgiveness does not mean giving up one’s rights.

“It is nice to hear about national unity and that we are all part of one family,” Thomas said. “But it must be based in equality and citizenship.”

For the bishop, justice includes the education system, such as removing texts that buttress discrimination. It also applies to the rule of law, such as prosecuting crimes committed against Copts.

But the message of forgiveness can complicate the traditional dual role of the Orthodox church in religion and politics. It bears a difficult burden, forced to defend both national unity and Coptic safety, said Nader Shukry, a journalist and expert in Coptic affairs.

“The Coptic problem is not new,” he told CT after returning from a village in Minya experiencing fresh sectarian troubles. “It is built on the old patterns of ‘reconciliation’ following conflict. And the Copts as the weaker party will always pay the price.”

Shukry visited Kom al-Loufy, 140 miles south of Cairo, where police permitted village Christians to perform Maundy Thursday prayers in a private home. But under their guard, local extremists pelted Copts with stones and burned uninhabited properties. No one was arrested.

“Copts have to act as citizens,” Shukry said, “and allow the church to be a spiritual institution, in which forgiveness is an appropriate response.”

Ali said the state is very happy to have the church be responsible for the problems of its flock. It is just part of what he called a “disemboweled sense of citizenship.”

And in the perpetuation of this pattern of injury, forgiveness, and patience, Kharrat, the KEDC elder, said the government has long been shortsighted. It has chosen to appease the anger of Muslim mobs, being confident that Christians would not cause major difficulties.

Early efforts by young Copts to demonstrate for equal rights and against church attacks during the revolution were a headache for the government, he said. The most prominent movement, the Maspero Youth Union, was ended forcefully: literally crushed under military tanks, previewing the eventual crackdown against most post-Morsi activism.

Kharrat hopes there can be a revival of nonviolent Coptic protest. But of the latest bombings, many believe ISIS is trying to spur on reciprocal religious violence, as it did in Iraq between Sunni and Shia.

“There is great relief the Copts are not hitting back,” he said.

But if the example of forgiveness has yet to transform the state, is there hope it will transform society? Kharrat said it already has.

“The families of the martyrs are promoting a worldview that is 180 degrees contrary to that of the terrorists,” he said. “The great majority of Egyptians now carry deep respect for the Copts, who are viewed as patriotic people of faith.”

And Ali, the Muslim AUC professor, is among the admirers.

“Cynics might say that Copts are not in the position to forgive, as they have no power,” he said. “But as an individual, I find it a brave act, and we need more on every level.

“There has been so much hurt in this country, and there is no sense of forgiveness in the body politic.”

Like Ali, Atallah is aware of possible cynicism. Young Christians feeling oppressed over the loss of rights might view the teaching of forgiveness as an opiate, he said.

But instead, he situates the example of the martyrs within a larger cultural struggle over the nature of Egyptian Islam.

Muslims had Christian ancestors, he said, and the Coptic heritage is strong. This helps sanitizes religion into principles emphasizing love, forgiveness, and doing good.

Middle Eastern culture, however, is based on honor and shame, demanding revenge. And Wahhabi-style Islam is an import to Egypt.

Within this clash of cultures, Atallah said many are now witnessing Christian forgiveness, and find it to be exactly what the country needs.

Besides frustrating the extremists who want to provoke the Copts, Christians like the widow of Faheem are winning over Muslims as well. “Their testimony is like a domino, with incredible ramifications in the country,” Atallah said. “It will keep Egypt from becoming like Lebanon during its civil war.”

The spiritual ramifications run even deeper for Bishop Thomas, who has recently received many unexpected visits of sympathy and solidarity from local Muslim sheikhs and charity workers.

For the past 15 years, his school in Qusia has been a home of civic engagement for Muslims and Christians, discussing ethics and childrearing for the sake of their kids. But now Muslims are asking about other issues altogether.

“When people see this attitude from Christians and the church, they ask themselves, ‘What kind of power is this?’” he said. “But with this witness we must also declare the message of Christ, which we are fulfilling—literally. We may not see the response immediately. But we will in the near future.”