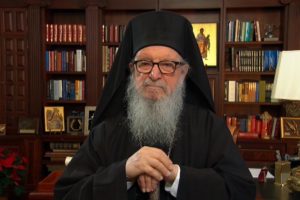 Archbishop Demetrios of the Greek Orthodox Archdiocese of America

Jerry Dimitriou, the former head of administration at the Greek Orthodox Archdiocese of America who resigned from his post when news of the financial crisis emerged, has finally broken his silence.

Dimitriou, who has worked for numerous Archbishops of America, resigned from his position, after numerous reports circulated about the dire state of financial affairs.

Both inside the Archdiocese and in the media, blame was deflected from Archbishop Demetrios and placed on Dimitriou.

In a surprising move, the Archbishop himself claimed complete ignorance to what was happening with Archdiocese finances, stating in a letter to the faithful that he first learned of the dire state of affairs “a few months ago.”

On Wednesday, January 24, 2018 at 10:30pm, Dimitriou sent an explosive letter to Archbishop Demetrios of America, copying every Metropolitan in the United States, as well as the Ecumenical Patriarch of Constantinople.

In the letter, obtained in its entirety by The Pappas Post and verified for authenticity by Mr. Dimitriou, he claims that the Archbishop was complicit in numerous decisions and indecisions that led to the state of affairs today– contrary to the Archbishop’s claim he knew nothing.

“I have watched as a difficult financial situation became a crisis for our Church – completely avoidable – because the good members of the legal and finance committees acted on misleading financial information supplied to them by those too far divorced from the process to understand it and the information they were supplying to their committees,” according to Dimitriou’s letter.

“Worse than that, I keep reading reports that you have said you knew nothing of the state of the finances of the Archdiocese and that I was responsible for everything.”

Dimitriou, who claims to have been bound by a confidentiality agreement based on his contract with the Archdiocese, stated in the latter that he would no longer “remain silent and permit myself to be the scapegoat.”

The complete text of Jerry Dimitriou’s letter to Archbishop Demetrios of America is below.

A verified copy of the letter that was sent, in PDF format, is here.

I write with great sadness, disappointment and loss. And I write with fear: for myself, for my family and for our Church.

For five months since my resignation I have watched, uncertain of what to do (in part because my resignation agreement with the Archdiocese prohibited me from speaking out) as unsupported assertions of overwhelming debt, huge deficits and missing funds circulated, unanswered by the Archdiocese. I watched to the point where my reputation and integrity have been called into question, and trust in the Archdiocese has eroded to such an extent that parishes are withholding their national ministries commitments to the national Church.

I have watched as a difficult financial situation became a crisis for our Church – completely avoidable – because the good members of the legal and finance committees acted on misleading financial information supplied to them by those too far divorced from the process to understand it and the information they were supplying to their committees.

Worse than that, I keep reading reports that you have said you knew nothing of the state of the finances of the Archdiocese and that I was responsible for everything.

Did we not work together to restructure the Archdiocese finances to change the national ministries allocation formula of the Parishes from an income-based formula to an expense-based formula, making it a more fair system of allocation for the Parishes and thus increasing the Stewardship Revenue of the Archdiocese from $9 Million to over $20 Million in these 17 years?

Did we not work together to create new ministries and new departments in the Archdiocese to further the ministry work of the Church; Ministries that you personally created by your challenges to the faithful through your keynote addresses to the many Clergy Laity Congresses? Were you not part of the process of creating and funding these ministries through our budgets, fully aware of their funding

and costs? Did the Executive Committee and Clergy Laity Congress not approve those budgets and fund the ministries of the Church these past 17 years in open transparency?

Did we not discuss, together and with others, the loss of our very dear beloved friends and major stewards of our Archdiocese, Mr. Michael Jaharis and Mr. Nicholas Bouras, and the very difficult financial situation their loss would place upon the Church? Did I not inform you that the loss of over $3 Million from their personal stewardship would have a direct impact upon the Church in America and the budget of the Archdiocese?

Did we not work together, with Fr. Alex Karloutsos, Michael Jaharis and many other dedicated individuals over these past 17 years to fight for St. Nicholas Greek Orthodox Church at the World Trade Center? Did you and the committee you appointed not choose Santiago Calatrava as the Architect to build the Church? Did you not agree to all the design changes that were made by Mr. Calatrava? Did I not advise you and others that those changes would cost millions of extra dollars; dollars that would have to be raised and dollars that were not in the budget? Did you not sit in meetings with Mr. Calatrava discussing and ultimately agreeing to those changes and cost increases? Were you not told, before Mr. Calatrava was chosen, that if you choose him as the design Architect, the budget would surely be at least double what was originally estimated?

The answer, as you know Your Eminence, is yes you were aware, you did make decisions, you knew the facts of what we were doing and where our Archdiocese was headed. You are the Archbishop and you are responsible for these decisions; many of which are documented in letters and memos.

I have served the Church for 30 years and you for 17 of those years. I have done so out of love and not for financial gain as you yourself can attest. You and Michael Jaharis asked me to return to the Church in 2000 from my secular job. As you know, I did not want to return, but to serve in other capacities. You both insisted and knowing my love for my Church and the Archdiocese, I returned as Executive Director, not as Chief Financial Officer as many in the press seem to think.

Again, five years ago I came to you and told you I was leaving the Archdiocese for a secular position and I would give you 6 months transition so you could fill my position. You and Michael Jaharis pleaded with me to stay on and not leave the Archdiocese and then offered me a contract to stay. A contract that was negotiated in good faith by me and the Archdiocese through our mutual attorneys, all because you wanted me to stay with you as Executive Director until you left the Archdiocese.

Now is the time, Your Eminence, to speak out in truth and love.

The first step you can take is to acknowledge the decisions you made as The Archbishop and as our spiritual and administrative leader – decisions of which you were fully aware and in which you participated fully.

Second is to acknowledge the damage caused to our Church by the repeated rejection of my offers before and after my departure to meet with you and the new CFO, formerly our Controller, to review the finances and the financial condition of the Archdiocese. Simple communication and meeting with

me would have averted some of the crises you face today. A clear example was the termination of the construction contract for St. Nicholas by Skanska because no one bothered to sign the suspension agreement I had negotiated and to which Skanska had already agreed before they fully terminated their contract. A decision that will cause the St. Nicholas budget to expand exponentially should the restart of construction be delayed any longer. Another example was termination of the 40-year relationship of the Archdiocese with Chase Manhattan Bank because apparently no one bothered to negotiate and discuss our situation with them as you and I had done many times before.

Third is to acknowledge your full involvement in the entire process of the rebuilding of the St. Nicholas Church at Ground Zero, and the hundreds of briefings that I gave you over the years, keeping you fully and completely informed as to the status of the rebuilding effort – including each and every change made to its design, all of which you personally approved.

Fourth is to convene a structured process involving Your Eminence and a representative of the Ecumenical Patriarchate, the new management of the Archdiocese, the new CFO, and me in order to seek out the facts as they relate to the financial condition of the Archdiocese; with special emphasis on the fiscal operating deficits, and the allegations of misappropriation of monies, some of which have been directed at me, and which I categorically deny. This process will also ensure that correct and complete information is made available to any audits or special investigations that may be underway. I challenge the false claims and the false numbers that have been irresponsibly leaked to the press and would like them to be corrected, verified and then properly and fully released to the public.

I repeat: I was and am fully prepared to share my full and complete knowledge of the finances of the Archdiocese and the rebuilding of St. Nicholas in the framework of a fair and objective process that has as its aim the truth. What I am not prepared to do is to remain silent and permit myself to be the scapegoat.

I take no joy in writing this letter. I know the road ahead is a difficult and sad one for all of us – for you, for me and my family, and most of all for our community. I take comfort however if the facts are made known and fully understood, our faithful will rally around and support the good works of faith and ministry that are being performed by the many dedicated and faithful people of our Church and those who serve it.

With Love and Respect,

cc: His All Holiness Ecumenical Patriarch Bartholomew
The Holy Eparchial Synod of America