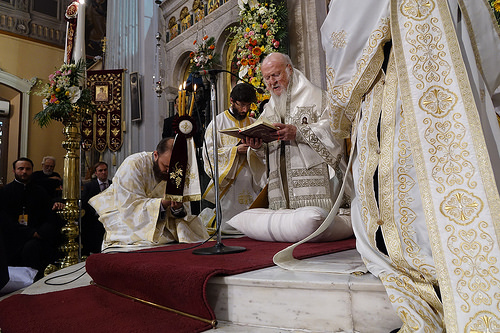 In his toast this past Thursday night on the eve of the Holy and Great Council, Ecumenical Patriarch Bartholomew of Constantinople, the first among equals of the bishops of the Orthodox Church, expressed his sympathy for the Church of Antioch, which is suffering in the face of militant Islam. He decried

the intense and intricate problems, which the brother Primates and local Orthodox Churches face on the account of intolerance and religious fanaticism, especially the ancient Patriarchate of Antioch and our beloved Primate, Patriarch John of Antioch.

But as His All Holiness raised his glass, these words mixed a bitter cup for the Church of Antioch, whose absence from the council Bartholomew could have remedied. What’s more, Antioch’s presence could have been the key to making the council a universal Orthodox expression of unity and brotherhood—what the Ecumenical Patriarch hoped it would be, and what increasingly seems unattainable….