In an unprecedented action, two Orthodox Christian churches—one Greek and one Antiochian—have merged together to form a new parish in northeastern Tennessee. Holy Resurrection (AOCA) in Johnson City and Holy Trinity (GOA) in Bluff City joined together in their first liturgy on June 23, the Feast of Pentecost. The new parish, which has taken the name Christ the Savior, comes under the jurisdiction of His Eminence Metropolitan Alexios of the Greek Orthodox Archdiocese. The parish is served by Fr. Stephen Mathewes, an Antiochian priest who had been assigned to Holy Resurrection.

Holy Trinity and Holy Resurrection were originally mission parishes, founded in 1984 and 1997 respectively. Despite the dedication of their members, both parishes had struggled in recent years. According to Fr. Mathewes, 20-30 parishioners attended Holy Resurrection for Divine Liturgy on a typical Sunday. “With a church that small, if one person comes or one goes, it’s a major change. It’s devastating if a family moves away or leaves. You feel all those ripples and waves.”

For the last several years Holy Trinity had not had a full-time priest. The parish was served by visiting priests who would celebrate liturgy once every 2-3 weeks.

The idea of merging the two parishes was initiated several months ago, when Metropolitan Alexios visited Holy Trinity and Bishop Antoun visited Holy Resurrection within a few weeks of each other. The realities of each parish’s situation prompted the hierarchs to propose joining the two. Each parish had something to offer: Holy Trinity owned its land and a building, and Holy Resurrection had a full-time priest in Fr. Mathewes. The decision evolved quickly: The new parish would worship in Holy Trinity’s building and be led by Fr. Mathewes.

At the instruction of Metropolitan Alexios, worshipping together was to be the first priority. The details of parish life are being addressed as they emerge. Fr. Mathewes says he’s grateful for that. “It has been great for us to come together in one building and worship together every Sunday and get to know one another.”

Rather than elect a new parish council, they merged their two existing councils into one. One of the first orders of business was selecting a new name for the parish. Though some saw a name change as a loss of identity, Fr. Mathewes felt choosing a new name was essential. “This is not a case of either church absorbing the other. This is a new church.” After much discussion they settled on the name Christ the Savior, which “bridges the gap, theologically” of the two parishes’ names and makes clear to passers-by that they are Christians. Metropolitan Alexios blessed the name change; the church’s new sign went up in August. 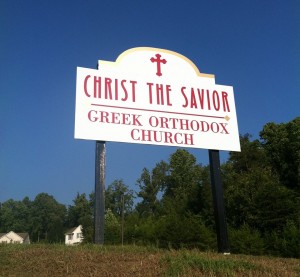 As for the composition of the new parish, it’s truly pan-Orthodox. “Cradle” Orthodox—including Greeks, Russians, and Bulgarians—and converts are represented in equal number. How will they blend their various musical and language traditions? The approach, says Fr. Mathewes, will be to determine what the parishioners want and need. He’s incorporating Greek to the best of his ability and wants parishioners of other traditions to feel included too. The Lord’s Prayer is recited in Greek and English and parishioners are welcome to say it aloud in their native tongues, which include Spanish and Korean.

Fr. Mathewes likens the union to a marriage, and the analogy is apt in more ways than one. They were brought together to make them stronger—for themselves and as witnesses of the Faith to others. Like a marriage the union will come with innumerable blessings and its share of challenges. As might be expected, the merger has elicited a broad range of feelings from parishioners.

Whatever challenges they may face, the parish recognizes its unique role at the forefront of Church unity in America. Fr. Mathewes says he’s certain that this union is God’s will, and therefore he doesn’t fear what the future holds. “I have faith in God that this is what he wants us to be doing and for that reason he will continue to bless us and guide us. He already has in this short time and he will continue to.”