SALT LAKE CITY — For the first time in almost 20 years, Utah’s Greek Orthodox community welcomed Archbishop Elpidophoros, archbishop of the Greek Orthodox Archdiocese of America, in what was described as an “unprecedented” six-day visit.

Archbishop Elpidophoros’ visit culminated in a church service in Salt Lake City Sunday morning, but he spent the rest of his time in Utah meeting with members of the faith and other religious and political leaders.

The archbishop spent time with KSL NewsRadio’s Boyd Matheson and spoke to him about the importance of what Jesus Christ said about the events leading to his second coming. He said Christ will judge not on how many times someone attends church services or fasts, but by their treatment of others.

“He is, in this aspect, more revolutionary than we think and than we are. And he is showing us the way how to deal with each other, how to respect the human person without any prejudices,” the Most Rev. Elpidophoros said.

This was his first visit to Utah since being elected archbishop of America in May 2019. His predecessor visited the state in November 2000.

“He is really quite a wonderful individual who understands the contemporary world and knows where he is leading us. That is what is so inspiring about him,” Karahalios said.

The Most Rev. Elpidophoros visited parishes in Ogden and Sandy, and two churches and one parish in Salt Lake City. Karahalios said the archbishop wanted to visit another parish in Price but there was not enough time to make the trip.

“This is an unprecedented visit and we are so honored to have him here for such a long time,” Karahalios said. “It’s just something I probably won’t forget for the rest of my life.”

“I was grateful to hear his admiration of our tree planting efforts and his support for Salt Lake City and our endeavors around homelessness,” Mendenhall said on Twitter.

Both Mendenhall and Karahalios said they hope the archbishop can visit again in April to help plant trees in the city.

Gov. Spencer Cox met with the archbishop Wednesday at the Capitol.

“He is standing up for the health of all Utahans and fighting back against anti-science rhetoric,” Archbishop Elpidophoros said in a tweet. “He is educating and leading Utah with the plain truth, and we pray that more like him will stand up and be counted.”

The archbishop spent Thursday morning with the First Presidency of The Church of Jesus Christ of Latter-day Saints to “become better acquainted,” according to a press release from the church. 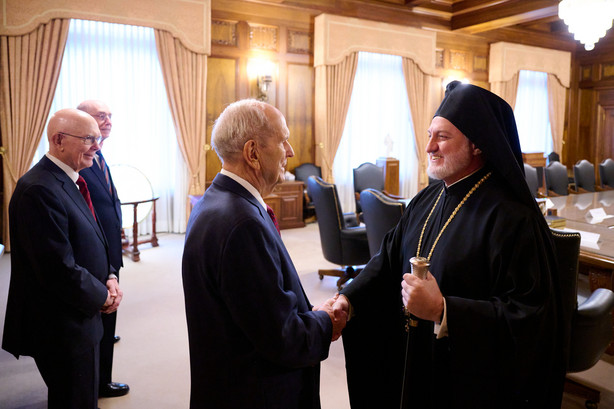