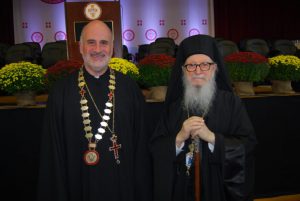 BOSTON, MA – Rev. Christopher Metropulos, President of Hellenic College and Holy Cross Greek Orthodox School of Theology (HCHC) refuted the news that had been widely circulated around the campus, in the Greek-American community, and also in Greece, that Theological School Dean Dr. James Skedros has resigned.

Dr. Skedros did not respond to The National Herald’s request for comment. Skedros was appointed to School’s deanship in May, 2014. TNH has learned that Skedros mentioned his intent to resign during a faculty meeting some time ago.

Fr. Metropulos expressed his disappointment that TNH revealed the report of Admission Committee Chair Demitris Papacostas, chairman of the Admission Committee of the Board of Trustees. He refused to inform the community about the School’s financial problems and its deficit, which is expected to be at $3.3 million in June.

Metropulos also refused to say if the Student Center will finally be built, since the donor who pledged about $7 million died, and his family members are not willing to give the money. There is nothing in writing.

Regarding the visit of Archbishop Demetrios to the School on December 14, Metropulos said “it was for the regularly scheduled Executive Committee meeting.”

TNH: Why has Dr. James Skedros has resigned from the Deanship of the School of Theology?

CM:I laugh because some people you know love to live in a world that doesn’t exist. He has not resigned, these are illusions. I don’t know where these things come from

TNH: Is he going to resign in the near future?

CM: That is between him and the School, that is not something for public knowledge and it is not something that should be debated in the press. He has a contract with the School. He is one of our professors. He is our dean, and that is it. I don’t know where people come up with these things.

TNH: Why, you are not ready?

CM: Not right now. There is no reason for me to respond. You felt the need to print it and you printed it.

TNH: What happened on December 14 when the archbishop visited the School? Why did he do so?

CM: We had our regularly scheduled Executive Committee meeting, that is all.

TNH: You don’t want to share anything with us?

TNH: What about the Student Center, are you going to build it or not?

CM: We already have that discussion last time.

TNH: That was a few months ago, give us an update

CM: I will give it to you when I am ready.

TNH: What about the finances of the School? How much is the deficit?

CM: Again, I will give you that when we are ready to give to you. People like to throw things out there and throw out numbers, which is amazing; Very sad.

TNH: Are you telling us that Demitris Papacostas is wrong?

TNH: You mean to tell us that Mr. Papacostas, chairman of the Admissions Committee, didn’t know what he was talking about?

CM: I never said that. You are putting words in my mouth.

TNH: What did you imply?

CM: What I said is that all matters pertain to the School are handled within the School. They are not handled in the press. And it is the privilege of any School not to share any confidential information. The school is working hard every single day to offer a College and a School of Theology to the faithful of America.

TNH: And it is the duty of The National Herald to inform the Greek-American community, which supports the School financially.