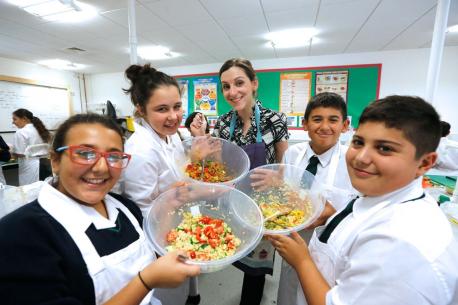 A headteacher has praised the “fantastic” start made by students and staff at the UK’s first Greek Orthodox state school.

St Andrew the Apostle became the first faith school of its kind when it opened its doors at the former Barnet College buildings in the North London Business Park in September.

Headteacher Robert Ahearn took the Times Series on a tour of the school in Oakleigh Road South, Brunswick Park, this week to speak about its progress one month into the term.

Staff have declined to join the National Union of Teachers strike later this month in order to support the school in its infancy.

Mr Ahearn said: “I left it up to them but the teachers are keen to support the school and don’t want to do anything that will be detrimental to the start we’ve made.”

The year group of 80 has already formed a student council and is getting stuck in to a curriculum that includes Latin and classics.

St Andrew’s is sponsored by the Russell Education Trust, which has helped set up several free schools in other communities, and various specialists have been on hand to support the school in its early stages.

The Greek Orthodox element is introduced to pupils through collective worship during assemblies, as well as a chapel at the school and an on-site chaplain.

About 50 per cent of the pupils will derive from the Greek Orthodox community but the school accepts children of all or no faiths and has organised bus transport for pupils from Enfield.

Mr Ahearn said: “The Greeks have very strong values around family and community.

“It has been a leap of faith for the parents to send their children to this new school. Every day is one where a huge range of different skills and expertise are required.

“But it hasn’t fazed me and with the fantastic support of the team around me, we have been very successful.”

More work is required to bring the former college buildings up to date and PE facilities are being hired at Trent Park, in Cockfosters, as well as Southgate Hockey Club and Saracens RFC.

Mr Ahearn, a former headteacher at Winston Churchill School in Woking, said: “It is about thinking outside the box. The school is pretty much there but we want to continue to develop and improve for years two and three.

“It has been fantastic. The students have been great fun to work with and just to see the progress they are already making and the fact they are keen to learn is superb. There has not been a single day I have not wanted to come in to work.”