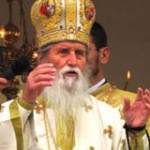 BUCHAREST, Romania — Romania’s highest court has upheld the conviction of a top Orthodox cleric that he secretly served as an informant for the country’s communist-era Securitate police.

The 83-year-old Archbishop Pimen was found guilty by a government council of serving as an informant sent by the church and the Securitate to spy on fellow clergy and members of Romania’s expatriate community in the United States in the 1970s.

Before the allegations emerged in 2007, he was considered one of the luminaries of the church and had hosted Romania’s former King Michael and Britain’s Prince Charles at famous painted monasteries in Romania.

The conviction carries no penalty.

The influential Romanian Orthodox Church has opposed opening the files of its senior clergy from Romania’s 1945-1989 communist era. Many priests are believed to have collaborated.