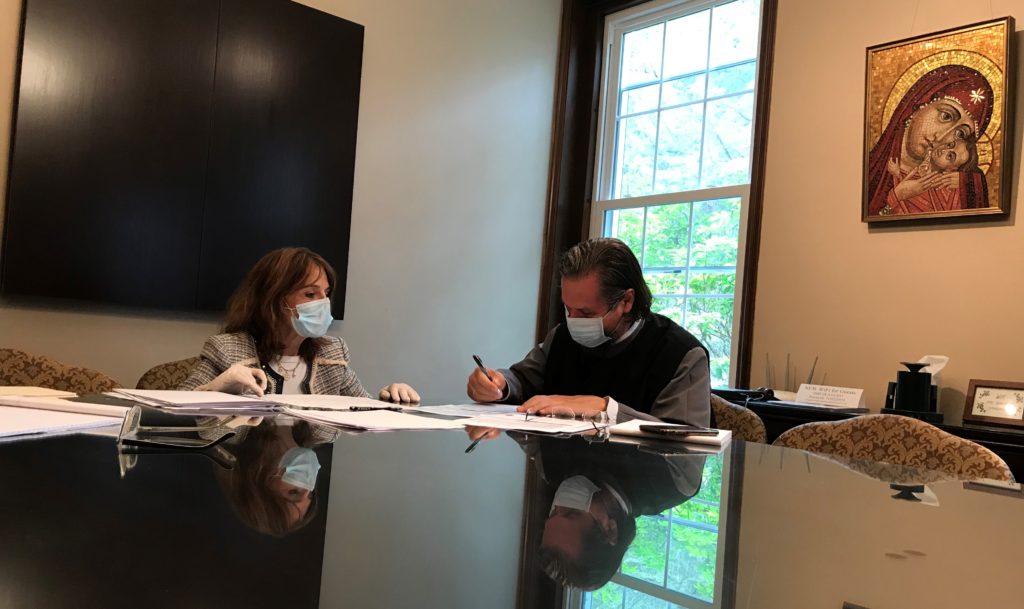 SYOSSET, NY [OCA]  On Monday, September 14, Archpriest Alexander Rentel, Chancellor of the Orthodox Church in America, made the following statement:

The Metropolitan Council and the Holy Synod had previously considered and discussed the relocation of the Chancery of the Orthodox Church in America and the sale of the property at their meetings in Spring 2019, and again in Fall 2019.

The decision to relocate the Chancery has not been taken lightly, and both the Metropolitan Council and Holy Synod acknowledge the historical significance and emotional ties that the present location and building have had over the last several decades to the faithful of the Orthodox Church in America. Nonetheless, several reasons urged them toward this new direction.

Above all, the sale of the Westwood property is being undertaken so that His Beatitude can move to the territory of his own diocese, the Archdiocese of Washington, where he and his administration will work and become part of the Church life there. When Metropolitan Leonty of blessed memory first moved to the Westwood property in 1958, the property was part of his canonical territory. Indeed, when the building was first acquired, it was projected as a residence for the metropolitan, a place of pilgrimage and other events, and not as the Chancery. The Chancery remained at the Cathedral in New York City. It was only in 1974 that the Westwood Estate became the official Chancery of the Orthodox Church in America.

In the years since, the Holy Synod of Bishops, reflecting the expansion and growth of the Orthodox Church in America, has created new sees and new dioceses, and drawn and redrawn the diocesan boundaries. Among these changes, the Holy Synod changed the see of the Metropolitan from New York to Washington, in order to be in accord with the ancient tradition in which the Metropolitan of a local synod resides in the capital city. This move has had the result that His Beatitude does not reside currently in his diocese, which is a canonical requirement. This relocation, in other words, is a natural development in the life of the Orthodox Church in America, as His Beatitude moves to the principal city of this country.

Currently, the task at hand toward meeting this goal is the sale of the Westwood property in Long Island. The next phase will be the relocation to the Washington, DC, area. As the current Chancery property also serves as the archives facility as well as the residence of His Beatitude, the relocation must be thought of as consisting of three interrelated parts:

In addition to having His Beatitude reside within his canonical territory, the preservation of the precious archives, the patrimony and great treasure of the record of life of the Church in North America requires its relocation to an appropriate place. The archives simply cannot remain indefinitely in the basement of a summer house, which is a mansion to be sure, but which was built for late-Spring and summer, not for all four seasons. A 2016 assessment of the present location of the archives concluded that even if the space was shored up in the best way possible, it would only represent a temporary fix. Something would still have to be done.

Finally, while the primary reasons for the sale and relocation of the Chancery are grounded in ecclesiology, the continued growth of our Church, and the preservation of the archives, there are other important factors.  The current property is 14.5 acres, and the Chancery itself only uses less than 0.5, but the Church is required to maintain all of it, the house, landscaping, the driveway, etc.  If the Chancery were to remain at this location, the current building would require work and upgrades that have been conservatively estimated at around $400,000. The work—rewiring of electricity, shoring up the basement, drainage issues, etc.—that this amount of money would cover is absolutely necessary, but represents only a bare minimum of what is needed to be done. In other words, the amount does not cover the cost of a whole host of other issues involved in repairing and upgrading a house that was built as a luxurious summer cottage, and maintaining the 14.5 acres it sits on.”

On Stewardship and the Chancery of the Orthodox Church in America

“In my booklet, Of What Life Do We Speak: Four Pillars for the Fulfillment of the Apostolic Work of the Church, I define the second pillar, stewardship, as the “application of our spiritual life to the realities of the fallen world” (page 31).  Stewardship often has to do with financial matters but it includes our care for other human beings, for the environment, and for the patrimony of our Church. In a very concrete way, all the institutions of the Orthodox Church in America, from the Holy Synod to Diocesan Councils, monasteries, and seminaries, are given the sacred task of safeguarding the spiritual, material, and financial treasures of the Church. In other words, we are all called to be good stewards of the gifts that God has entrusted to our care. This same sacred task falls to me, as Primate of our local Church. In this, I am grateful to be assisted by the Holy Synod, by my Chancellor and Chancery Office and by the various bodies, such as the Metropolitan Council, that are appointed to assist me.

Many of you are aware of discussions that have taken place, beginning last year, concerning the location of the Chancery of the Orthodox Church in America. Those discussions led to the adoption by the Metropolitan Council, in February of this year, of a resolution to begin the process of selling the current Chancery property and to secure appropriate locations for the residence of the Metropolitan, for the chancery offices, and for the archives of the Orthodox Church in America, a decision confirmed by the Holy Synod at its Spring session. The fiduciary responsibilities of the Metropolitan Council are clearly enumerated in the Statute but those responsibilities are not narrowly restricted to financial issues but touch more broadly on the spiritual principles of stewardship. The members of the Metropolitan Council, as well as the members of the Property Committee which I appointed to study all aspects of a potential move, have been faithful in following these spiritual principles, even as they tackled the complex realities of finances and real estate.

I initiated these discussions after a long period of prayer and reflection and I continue to consider every step of this process as an exercise in stewardship. Many of you will recall previous debates about the relocation of the Chancery, discussions that were often undertaken during a time of crisis, of distrust, and of financial instability. By God’s grace, much of the fog of this previous atmosphere has been dispelled by the hard work and good will of many faithful and dedicated individuals in our Church. I am confident that our Church is now in a healthier position to consider more carefully some of the legitimate questions that have been raised in the past, and to accomplish this in a spirit of unity and genuine care for the health, stability, and growth of our Church. During my eight years as your Metropolitan, I have been striving to approach all questions, such as the location of the Chancery, with gratitude, with discernment, and with hope.

I have gratitude for the present Chancery property, which cannot be reduced to just a building and just land, but is rather an expression of the history and legacy of the Orthodox Church in America, particularly over the last 50 years of our existence as an autocephalous Church. The walls of the Westwood building have echoed with many forms of ecclesiastical drama but have also provided the physical space for momentous ecclesiastical actions, significant decisions, and the articulation of visions. They have been blessed by the presence of prayerful figures such as Metropolitan Leonty and have served as the place for historic events, such as the signing of the agreement of autocephaly on March 31, 1970 by Metropolitan Iriney and Metropolitan Nikodim. The building has not always served as the location of the Chancery, nor has the Primate always resided there. Since my own election as Primate in 2012, I have maintained my residence here and have been thankful for the peaceful and beautiful surroundings, which have offered me a quasi-monastic habitation.

In that context, these past eight years have provided me with an opportunity for prayerful discernment with respect to the future trajectory the Orthodox Church in America. I made a modest attempt at articulating a vision for this trajectory in my Four Pillars booklet and I am ever more convinced that the time has come to implement that vision, which is not my personal vision but that of the Church. The four pillars are expressions of broad themes concerning what we ought to do as the Church in North America. But at the same time we need to know how to accomplish this so as to give concrete expression to those themes, to become doers of the word, not just hearers. One small way we can accomplish this is through the present process of relocating the Chancery. There are many practical and financial reasons that have argued for such a relocation and these are legitimate reasons that are part of this discussion. However, the primary reasons that I am advocating for are the canonical and ecclesiastical reasons: I am the Archbishop of Washington, DC but I do not currently reside in my canonical territory. While I am grateful to His Eminence, Archbishop Michael, for his invitation to visit any of his local parishes, the reality remains that I and the Chancery reside on the territory of another diocese. This is more significant for me because I am, as it were, separated from my own flock. While I do not feel that I have neglected the clergy and faithful of the Archdiocese of Washington, there is no denying that my pastoral oversight is limited by the physical distance that separates us.

Certainly, my responsibilities to the broader Church as Primate will always make it difficult to adequately minister to my local flock. Nevertheless, I am convinced that my primatial responsibilities are currently limited by my isolation from my flock and that a carefully thought out relocation will be one concrete measure that will be spiritually, emotionally, and physically beneficial for the Orthodox Church in America. This is what offers me hope, in spite of the potential complexity of this process.  I know that our monastics, clergy, and faithful will not accept anything less than a glorious, honorable, and dignified solution to every aspect of this transition. There will undoubtedly be challenges that arise but we will navigate those challenges in the same way that the missionaries, founders, builders, and saints of our venerable Church have always navigated them: with faith in God, trust in their fellows, and humble perseverance.

I invite all the hierarchs, monastics, clergy, and faithful of the Orthodox Church in America to join me in prayer so that our Lord Jesus Christ might illumine the path before us as we continue our apostolic voyage here in North America.”