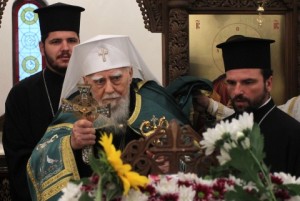 His Holiness, Patriarch Maxim of Bulgaria, 98, fell asleep in the Lord as a result of heart failure on Tuesday morning, November 6, 2012. He had been hospitalized for the past month.

According to an announcement issued by the Holy Synod of the Bulgarian Orthodox Church, the 13-member Holy Synod will meet to make funeral arrangements and choose a locum tenens until the convocation of a Church Council within the next four months to elect Patriarch Maxim’s successor.

Patriarch Maxim led the Bulgarian Church for over four decades, bridging the country’s transition from communism and withstanding efforts to oust him by the new democratic government and rebel priests who saw him as a communist collaborator. Eighty percent of Bulgaria’s 7.4 million citizens claim membership in the Church.

Born Marin Naidenov Minkov on October 29, 1914, he graduated from the Sofia Seminary in 1935 and entered Sofia University’s theology department in 1938. He was elected to the Patriarchal See on July 4, 1971.

After the fall of communism in 1989, the new democratic government attempted to replace public figures appointed during communist times, including the Patriarch. Due to the separation of Church and state, such a decision could only be made by the Church. A split occurred in the Church between the Patriarch’s supporters and those who attempted to oust him, who formed their own synod. The schism plunged the Church into turmoil, with occupations of key church buildings, including Sofia’s Saint Alexander Nevsky Cathedral.

For over a decade, the two synods existed side by side, with the schismatics claiming the support of 30 percent of the country’s 1,000 priests. The majority of believers remained loyal to Patriarch Maxim, who was recognized as legitimate by the other autocephalous Orthodox Churches.

The schism ended in 2010, when Metropolitan Innocent, the head of the rival synod, called for a healing of the division and dissolved his synod. Meanwhile, a panel reviewing communist-era collaborators with former security services found no links to Patriarch Maxim, although it revealed that 11 out of Bulgaria’s 15 bishops had collaborated with the communist regime.

Patriarch Maxim generally shunned political life, although he remained an influential figure throughout his tenure. He was hailed for meeting with Pope John Paul II during his 2002 visit to Sofia, a trip seen as warming the frosty relationship between the Church and the Vatican. He also rallied support among his Orthodox colleagues in other countries for the release of six Bulgarian medics sentenced to death by the Gadhafi regime in Libya for allegedly deliberately infecting children with HIV.

May Patriarch Maxim’s memory be eternal!