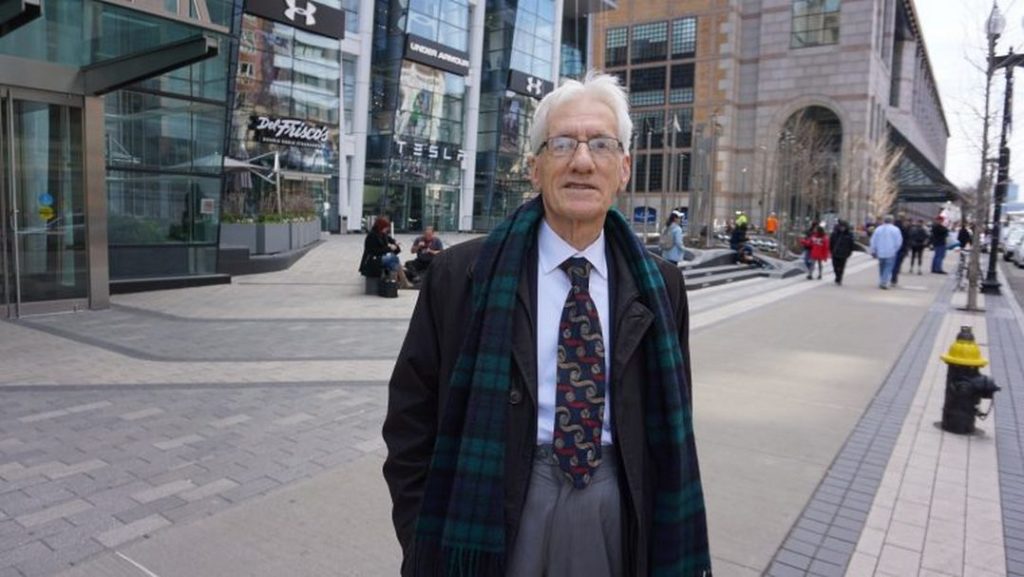 In addition to his teaching, he also served as Dean of Hellenic College from 1995 to 2002. Michopoulos has also supported the School financially in a substantial way with his own money.

During an interview with The National Herald he noted that he served as Dean of Hellenic College under three Archbishops: Iakovos, Spyridon, and Demetrios.

He was the head of the Greek Studies Department before going on sabbatical last year, with his duties being transferred to Professor Dova. He noted there is a total of four professors teaching Greek at the School, himself, Dr. Dova, Dr. Holmberg, and Dr. Vasileiou.
When we asked him about the current situation at HC/HC, just about a month or so before the end of the academic year, he replied: “it depends on how one looks at it. Your question brings me to what happened in Florida during the recent Leadership 100 Conference, where one of the participants had the ‘bright’ idea of proposing a reduction in the programs offered by the College and I took an opposite stand. In my reply I mentioned that the Jewish community has five schools of theology and another ten regular, i.e. secular ones. Of those fifteen colleges, the best one in theology is Yeshiva University in New York City with more than three thousand students and over five hundred million dollars in its endowment.

The flagship of the other Jewish universities is Brandeis University, which was created during the same time as HC/HC. It has over six thousand students in all its graduate and undergraduate departments and over one billion dollars in its endowment. We, on the other hand, have less than $30 million in our endowment and are discussing how to cut some programs.”

He said further: “I told them we have only one College and we are not by any means poor. The Jewish Americans are the most affluent immigrant community and we are second, while we are first in education and they come second, according to B. Rosen’s study. While they are able to maintain fifteen universities and especially some first-class ones, we have only one and want to chop it up and at the same time we pride ourselves that we have the only Greek Orthodox College in America! But if we make those cuts then we will not have even that, and we will simply have a school of theology. And the Russians have one of their own. Is that the right solution?”
He continued, saying that, “Hellenic College produces teachers, business executives, and many other specialties needed by our Church. And in the final analysis, if you go to a Church and there is no congregation there, what will the priest do? We can graduate students who can become priests, but if there are no faithful at the Church, then we have failed. That’s why we need everybody, i.e. priests, presbyteres, children, and the faithful. I have funded a Professorship in Greek History at Hellenic College and this moment I am funding a Scholarship Fund with $25,000. I told the audience at Leadership 100 that I’m offering at this moment $100 thousand dollars, if you give $1 million to take care of all the programs at HC/HC. I received applause, but nobody got up to make, let’s say, a pledge of fifty thousand or somebody else to make another pledge, and there ended the whole story.”

TNH asked Michopoulos to comment on reports that he has given serious amounts of his own money to the School. He replied that, “the Professorship in Greek history received $167,000 a couple of years ago and every year I give thousands of dollars for other needs of the school. During the past thirty years this sum must be above $100,000 and this is money that goes for all kinds of needs. At this moment I am funding an Endowed Scholarship Fund for the students of the College and have pledged $25,000 and hope not to stop at that amount.”

When we asked him why he was doing this, he answered, “For many reasons. One of them is that I was born poor and I believe in education. The second reason is that if there were no scholarships I might not have studied myself. The Greek Government paid for my studies – I got my BA from the University of Athens – through an I.K.Y. Scholarship, and the U.S. Government paid for my Ph.D. studies.”

He continued, saying, “It would be ingratitude and ungratefulness if I would forget all this and put my money in my pocket and were interested only in enjoying my life. To buy, like many others, a Mercedes or a Lexus, and go around showing-off my wealth. I had a Toyota for twenty years and some colleagues laughed when they saw it, but I changed it only when it could not run anymore. Then I replaced it with another Toyota.”

He then said with emotion, “I believe in Education and Hellenism and I have a sense that we are not doing our job well and that bothers me.”

Asked what he meant by “we are not doing our job well, and to whom he was referring, he replied, “All of us, both rich and poor. Each one of us finds a nice excuse and that brings to my mind the gospel parable: ‘I bought a farm, I got married,’ etc. while in essence we are self-destructive.”

Regarding what was to blame for this state of affairs, he said, “our culture. I thought a lot about it and concluded that we must change our culture.”

Asked who will change it and how,” he said, “I don’t know. All of us together, I guess. When I was a graduate student in Florida, we had invited Vassilis Vassilikos to speak to us and as I was taking him to the airport, we were talking in the car, and I will never forget what he said to me. ‘Aristoteli, the Modern Greek is interested only in two things: his belly and his reproductive organ! Nothing else is of interest to him. And that discussion took place in the 1980s!” Professor Michopoulos emphasized again, “we must change our mentality.”

He was then asked if it is also a matter of leadership.

“It is also a matter of leadership, he said. “I’ve thought a lot about it. But who elects the leaders? The people!”
Finally, we asked about the specific current situation at Hellenic College and Holy Cross and how things reached this point, inquiring also whether only the president, Fr. Christopher Metropulos, is to blame.

“I do not believe that only one person is responsible for everything,” he said, adding, “to some extent there is a distribution of power in everything. When the faculty elected me as its representative to the Board of Trustees and saw certain things there, I realized that we had let things veer off course.”