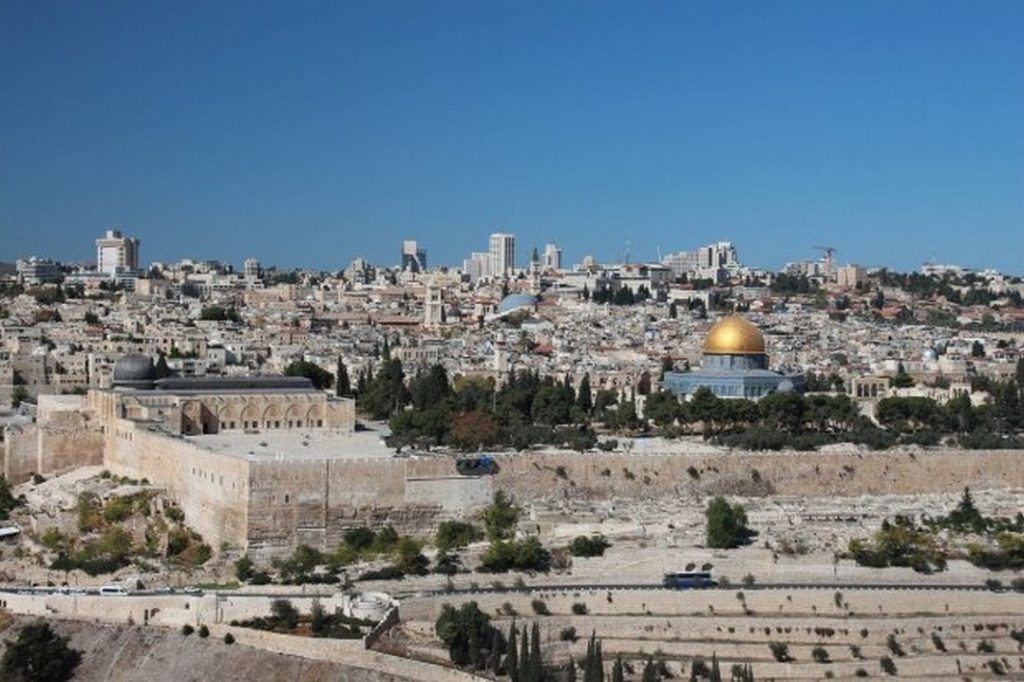 It’s been a brutal week for Palestinians in the city of peace.

As hardline Israeli groups prepared a provocative parade through the Muslim Quarter of the Old City, Israeli security forces turned their guns on peaceful Palestinian protesters and worshipers performing Ramadan prayers at the Aqsa mosque, injuring hundreds in yet another brutal crackdown. Videos circulating on social media in recent days have shown Israeli police officers throwing stun grenades and shooting rubber bullets at Palestinians inside the mosque, attacking Palestinian worshippers with tear gas bombs, and viciously beating a Palestinian man in the mosque compound. Disturbing footage showed a group of Jewish ultranationalists dancing in celebration to the sight of flames leaping above the Aqsa mosque compound. Violence quickly spiraled across the country, threatening a civil war in the streets of Israel’s mixed cities, notably Lod, Ramla, Acre, Haifa, and Jaffa, where Arabs and Jews, Muslims and Christians, have managed a delicate coexistence for decades. Farther south, Israeli strikes in Gaza have killed more than 100 Palestinians, including children, and wounding 1000 others, while destroying multistory buildings and displacing hundreds of residents.

Once again, Israel has turned its celebrations of Jerusalem Day, an Israeli national holiday commemorating the reunification of Jerusalem and the establishment of Israeli control over the Old City, into an occasion to repress Palestinians, and remind the world that it is in fact, as a Human Rights Watch report acknowledged last week, an apartheid state.

What is happening in Jerusalem, then, are not “clashes” between Israelis and Palestinians, as mainstream outlets would have you to believe. What is happening is the brutal daily reality of an occupying power, emboldened by unconditional US support and international apathy, exercising its military might against a stateless people living under its control, stripped of their basic human and civil rights. What is happening is a Netanyahu administration seemingly emboldened by the deafening silence from Washington, where the Biden administration has yet to take a clear stance on the its ongoing violation of Palestinian rights.

Tensions had been simmering in the city for weeks. Jerusalemites braced for unrest as the Israeli supreme court was preparing to rule in favor of the forced evictions of six Palestinian families from their homes in the Sheikh Jarrah neighborhood in East Jerusalem, where they had lived for decades. Heavily armed Jewish militant settler groups staged provocative parades through the Arab neighborhoods and the Muslim quarters of the Old City, while the Israeli authorities imposed restrictions on Palestinian worshippers during Ramadan, forbidding Muslims from gathering at a favorable plaza during the first weeks of the holy month. Meanwhile, Jewish nationalist groups have been pressing for the right to pray in the Aqsa mosque compound. Under a delicate status quo arrangement, an Islamic trust known as the Waqf, funded and controlled by Jordan, administers the Aqsa mosque and the Dome of the Rock, while Israeli security forces maintain a presence on the site and coordinate with the Waqf. Jewish and Christians are allowed to visit, but are prohibited from praying on the grounds under the status quo arrangement.

The Christian community has fared no better. Israel bars Christians from visiting Jerusalem and Bethlehem at Christmas, especially those hailing from Gaza, where some 1000 Christians, mostly Greek Orthodox, live. Church leaders in Jerusalem face daily abuses and harassments, threats and intimidations, by Israeli settlers. These include acts of vandalism, arson, and desecration of church property in the ancient walled city. Not long ago, a Greek Orthodox seminary was set alight and vandalized with anti-Christian graffiti.

The Christian community in Jerusalem is also facing the daily threat of forced acquisitions of church property by hardline Jewish settlers, and the expropriation of church land by the state. The Greek Orthodox church, the oldest Christian presence in the Old City, has reported multiple attempts by settler organizations to seize its properties near Jaffa Gate, the main entrance to the Christian and Armenian quarters. Settler organizations like Ateret Cohanim have been aggressively purchasing church land to increase the Jewish presence in the Old City and fulfill what the settler group refers to as “physical and spiritual redemption” of the Old City.

But the roots of the issue run deeper. For decades Israel has unilaterally declared Jerusalem its “eternal and unified capital.” (The US has given its blessing by relocating its embassy to Jerusalem.) As Israel’s prime minister Benjamin Netanyahu reinstated last week: “Jerusalem is Israel’s capital and just as every nation builds in its capital and builds up its capital, we also have the right to build in Jerusalem and to build up Jerusalem. That is what we have done and that is what we will continue to do.” Israel’s continuous claims to exclusive rights over Jerusalem has emboldened its settlers community for new extremes, while allowing Israel to pursue policies aiming at displacing and dispossessing Palestinians in the city.

Palestinians see these policies as a brazen land-grabbing scheme, an expansionist plan hatched in broad daylight and backed up by violent settlers. Netanyahu’s “Greater Jerusalem” vision plans to annex Jerusalem, where hundreds of thousands of Palestinians, who constitute nearly 40 percent of the city’s population, with thousands living beyond the “separation barrier” in East Jerusalem, are facing the daily prospect of displacement. Far-right settlers, armed to the teeth and emboldened by right-wing politicians, are demanding that the Israeli Supreme Court carry through the eviction of Palestinian families from East Jerusalem. By annexing East Jerusalem, Israel is rapidly headed toward a one-state reality which, sooner or later, would culminate in a Jewish minority ruling over a Palestinian majority in an apartheid-style regime. (Unlike Jews, Muslim and Christian Palestinians in Jerusalem live as stateless noncitizens whose permanent residence status can be evoked by Israel at any time.)

But Jerusalem belongs to all of its creeds. It sits on a land deemed sacred by the three faith groups. Jews believe it is the site of two temples that were the center of their religious and communal life. Jerusalem hosts the Church of the Holy Sepulchre. It’s the place where Jesus preached, died, and was resurrected. The city is now a major pilgrimage site for Christians around the world, many of whom also see Jerusalem as the site of an imminent Second Coming of Jesus. The city hosts the Aqsa mosque, one of the holiest structures in Islam, where the prophet Muhammad ascended to heaven and made his night journey from Mecca. It’s also the site of key events in the life of Jesus and other sacred figures in Islam.

Because of its delicate status, Jerusalem has been the site of the unending unrest in Palestine. It was the birthplace of the second Intifada, which erupted two decades ago after a provocative visit by Ariel Sharon to the Aqsa mosque compound, and the site of the deadly riots of 1990, which exploded after a group of Jewish extremists attempted to lay a cornerstone for a new temple.

The path to peace in Palestine passes through Jerusalem, and until there is a just solution for the Palestinians and their plight, there will never be peace in Jerusalem.

Seraj Assi holds a PhD in Arabic and Islamic Studies from Georgetown University. He is the author of The History and Politics of the Bedouin: Reimagining Nomadism in Modern Palestine (Routledge 2018).