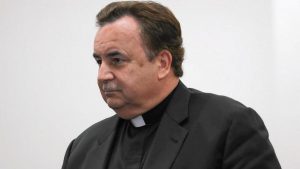 A Greek Orthodox priest from Chicago who pleaded guilty to stealing more than $100,000 from his church had his felony theft conviction reduced to a misdemeanor Wednesday.

A judge in Milwaukee agreed to instate the lesser conviction after the Rev. James Dokos satisfied the terms of his yearlong probation, including 40 hours of community service, which he fulfilled by volunteering in a Chicago church.

Dokos, 64, will continue to avoid jail time if he pays a $5,000 fine within the next year, officials said.

While leading Annunciation Church in Milwaukee, Dokos tapped into a trust fund intended to benefit the church and used the money for personal expenses, according to authorities. The priest controlled the $1 million fund — money that was left to the church by former parishioners — and used it to pay personal credit card bills, buy jewelry for a relative and provide gifts of more than $6,000 to a high-ranking church official in Chicago, among other unauthorized purchases, according to a 2013 Tribune analysis of trust fund records.

Parishioners at Annunciation began looking into the trust fund spending after Dokos was transferred by church leaders in Chicago to Sts. Peter and Paul congregation in Glenview. They contacted authorities in Milwaukee after an investigation by officials at the Greek Orthodox Metropolis of Chicago determined the priest had engaged in no wrongdoing.

“This is an extremely serious set of circumstances that a member of the clergy used and embezzled funds … that were to go to the church,” the judge said. “I always have a significant problem with somebody who was in a position of trust, who abuses that position of trust and steals money.”

Dokos, who has repaid the money to the church, pleaded guilty to theft last year, under the condition that the felony charge would be reduced to a misdemeanor if he performed his community service and otherwise abided by the rules of probation.

As was the case when he pleaded guilty a year ago, Dokos did not offer an apology in court Wednesday.

When the judge asked Dokos if he wished to say anything, the priest responded, “I’m just grateful for your time and consideration in this matter.”

The judge also warned that, even with a misdemeanor theft conviction, Dokos could still be jailed for up to nine months. Conen instead imposed an additional $5,000 fine against Dokos, who must pay it within a year.

Dokos’ attorney, Patrick Knight, noted that in addition to repaying the money, his client paid a “huge financial settlement” to Annunciation.

The specific figure was not provided, but Knight said it was “far beyond anything (prosecutors) were attempting to seek in terms of restitution.”

Scott Taylor, an attorney for Annunciation, confirmed the church reached an out-of-court settlement with Dokos last year. He declined to give further details.

“I’m certainly not surprised there was no jail time,” he said of the penalties Dokos received.

Dokos is on a leave of absence with the church, but provides voluntary assistance in ministry, Knight said. Prosecutor David Robles said Dokos fulfilled his court-imposed community service by working at St. Andrew Greek Orthodox Church in Chicago, where he was involved in preparations for Lent and other church functions.

Following the hearing, a Metropolis spokesman released a statement: “The court has rendered its verdict, including the approval of all terms and conditions of Rev. Dokos’ probation and community service. The Greek Orthodox Metropolis of Chicago has no additional comment regarding this tragic case.”

The spokesman did not address whether Dokos will return to formal priestly duties.

Records shows that the No.-2 ranking official at the Metropolis, Bishop Demetrios of Mokissos, received $6,700 in checks written by Dokos from the trust fund. Metropolis officials have said that financial gifts to church hierarchy are traditional and that the source of the gifts from Dokos “was not questioned.”

The church hierarchy in Chicago, which oversees Greek Orthodox congregations in several Midwestern states, has come under criticism for its handling of the allegations.

The Metropolis initially did its own investigation, which found that Dokos’ spending from the fund was in accordance with its terms.

Later, when the parish council president at Sts. Peter and Paul in Glenview asked that Dokos be placed on leave during the criminal investigation, Metropolis leaders angrily rebuked the council president and instead removed him from the position.

After media reports surfaced, the Metropolis posted a message on its website saying leaders “stand together to deplore the use of public media outlets as a means of handling internal issues and conflicts that confront the Church.” The statement did not refer specifically to the Dokos allegations.

Later, Bishop Demetrios was warned by a Milwaukee prosecutor against “potential efforts to intimidate witnesses,” related to emails that another Annunciation priest said he had exchanged with the bishop about the case. That priest was later reassigned.

Sts. Peter and Paul member George Karcazes, who has been critical of Dokos and the Metropolis, said the scandal has hurt the church, which has lost many families over the matter. Karcazes has said he was removed from a parish committee after speaking out.

“People see this and they leave the church, because they are so disappointed in the leadership of the church,” Karcazes said.

He said many in the community are anxious to see whether Dokos is reinstated.

“I don’t know how many people are going to want to show up and take communion from this man,” Karcazes said. “The church discipline is what everyone is looking for. … Everyone wants to see where he’s assigned next, whether it’s Sioux City, Iowa, or Chicago.”