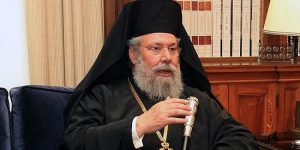 Cypriot LGBT “rights group” ACCEPT has labeled Archbishop Chrysostomos as hateful, and is calling for his recent comments on the desire to create schools aimed at instilling children with traditional, Orthodox morality to be investigated, reports The Cyprus Weekly.

In an interview with the MEGAONE television station the archbishop revealed that the Church is contemplating creating its own school system, with nurseries, elementary, middle and high schools being created over the next several years.

The primate correctly identified homosexuality as “an aberrance and a sin,” saying “It is not something normal. It is unnatural.” In this light he noted that the proposed schools will aim to form upright, moral citizens, “direct[ing]children away from homosexuality.”

In response, ACCEPT announced, “We will be reporting the incident to the Attorney General of the Republic as a violation of the Criminal Code concerning the promotion of hatred due to sexual orientation or gender identity, and will make all relevant representations.” The group also wants the TV station investigated for the supposed “promotion of racist messages and hate speech.”

The voice of the Orthodox Church on such matters is generally respected in Cyprus, though the country has been forced to reexamine its “human rights legislation” since seeking EU membership.

In this vein, ACCEPT proclaimed, revealing its utter lack of understanding of Orthodoxy: “Morality and belief have nothing to do with sexual orientation, gender identity or sex characteristics and a person can both be LGBTI and simultaneously follow the path of God and his teachings. Let’s not forget, moreover, that the Church itself was created, composed, and represented by people with their own passions.”

While the group promoting immoral lifestyles accuses the archbishop of using “a rhetoric of hatred,” Archbishop Chrysostomos’ statements instead focused on teaching the path to salvation of all. He stated that when speaking to students who themselves identify as homosexual he would “tell them that humans ought to learn how to struggle”—the same effort that places all Orthodox Christians in the path of Christ’s life.