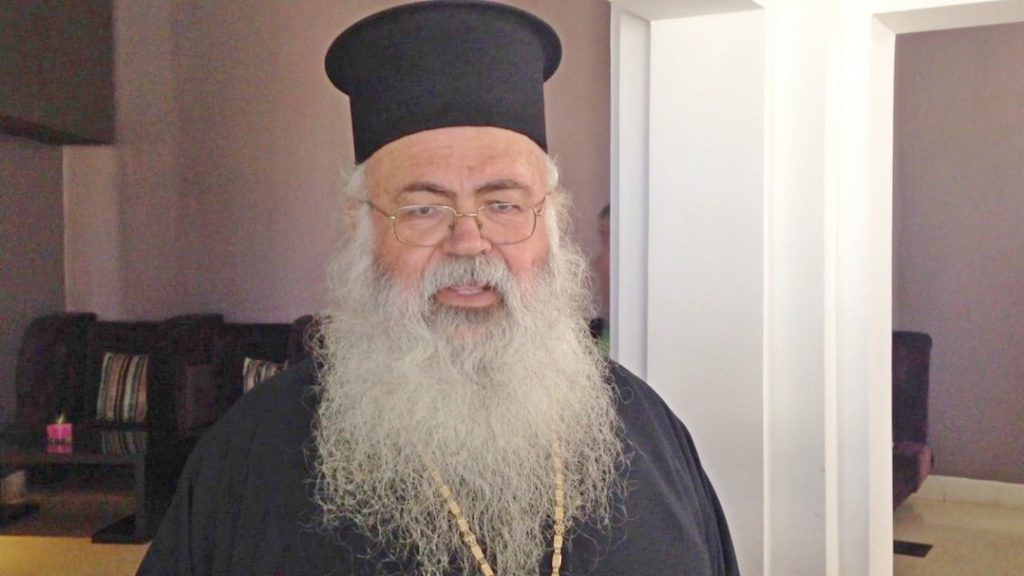 Metropolitan Georgios of Paphos was elected as the new Archbishop of Cyprus.

On December 24, the Holy Synod of the Orthodox Church of Cyprus met and elected Metropolitan Georgios of Paphos as the new Archbishop of Nea Justiniana and All Cyprus.   (https://churchofcyprus.org.cy/83964 )  According to the official announcement, ”eleven hierarchs voted for Georgios of Paphos, four for the Metropolitan of Limassol, while there was also one blank ballot.”  The announcement stated that the enthronement date will be set later.  Although the election had originally been expected to occur sometime between Christmas and New Year’s Day, the Synod had met on December 22 and decided to hold the election on Christmas Eve – an indication that the individual bishops did not need much additional time to make their individual decisions.

Prior to the election, Metropolitan Georgios had stated eleven points as his vision for the Church of Cyprus.  https://www.impaphou.org/news_article/615.aspx  All of these points relate to domestic matters within Cyprus, and none of them relate to international matters.  However, the Russian news agency RIA-Novosti reported the election of Georgios with the following headline: “The Metropolitan, who supported the OCU, became the head of the Cypriot Orthodox Church.”   https://ria.ru/20221224/georgiy-1841058627.html

On December 22, Metropolitan Nikiforos of Kykkos had appealed to the clergy and the faithful to vote for Metropolitan Athanasios of Limassol.  https://spzh.news/en/news/70279-isaiah-of-tamassos-confessor-metropolitan-athanasius-should-be-the-primate  He noted that Athanasios had received 36% of the vote in the earlier election by the faithful and that this is “a clear and complete signal that the people are in favor of electing Metropolitan Athanasios as the new archbishop of Cyprus.”  Previously, Nikiforos had stated his support for Metropolitan Isaias of Tamasos.  Now, after the December 24 election, Metropolitan Isaias, who was one of the three finalists, has given a very interesting interview.  https://www.alphanews.live/cyprus/tamasoy-isaias-giorti-gia-tin-ekklisia-kai-tin-kypro-i-eklogi-toy-arhiepiskopoy  He indicated that he is very happy with the election of Georgios and voted for him.  He stated: “As you understand, we who represent 65% have given our confidence to the elected Archbishop.  We gave him a strong mandate to start his work with love, solidarity and cooperation.”  Thus, he makes the argument that those hierarchs who received 65% of the vote of the faithful supported Georgios, while only 35% of the faithful supported Athanasios.  Thus, all of the six candidates, except for Athanasios, on the ballot used by the faithful, voted in the end for Georgios.  So far, I have not seen a post-election statement by Metropolitan Athanasios.  http://www.imlemesou.org/  (his website)

Ecumenical Patriarch Bartholomew called Metropolitan Georgios at noon on December 24 with “warm congratulatory wishes.”   https://ec-patr.org/%cf%84%ce%b7%ce%bb%ce%b5%cf%86%cf%89%ce%bd%ce%b9%ce%ba%ce%ae-%ce%b5%cf%80%ce%b9%ce%ba%ce%bf%ce%b9%ce%bd%cf%89%ce%bd%ce%af%ce%b1-%cf%84%ce%bf%cf%85-%ce%bf%ce%b9%ce%ba%ce%bf%cf%85%ce%bc%ce%b5%ce%bd-9/?fbclid=IwAR0Tpc_uq2nj_UmTZIBsuSUVlM1mSvOSYGDAAMqZZFiiSRumFYO3wvb9TZA  According to the communique, “the two Primates agreed to strengthen the cooperation of the Ecumenical Patriarchate and the Church of Cyprus, particularly on issues of Orthodox and inter-Christian interest.”

On December 16 the Cabinet of Ministers of Ukraine appointed Viktor Yelensky as Head of the State Service of Ukraine for Ethnopolitics and Freedom of Conscience (“State Service”).  https://www.kmu.gov.ua/npas/pro-pryznachennia-ielenskoho-v-ie-holovoiu-derzhavnoi-sluzhby-ukrainy-z-etnopolityky-ta-svobody-t161222  His appointment fills the vacancy resulting from the discharge of Olena Bogdan by the Cabinet on December 6.  https://www.kmu.gov.ua/npas/pro-zvilnennia-bohdan-o-v-z-posady-holovy-derzhavnoi-sluzhby-ukrainy-z-etnopolityky-ta-svobody-sovisti-1092-061222  An English biography of Yelensky can be read at https://en.wikipedia.org/wiki/Viktor_Yelensky .   A detailed analysis of his background is found at https://glavcom.ua/country/politics/ministr-relihij-khto-takij-viktor-jelenskij-i-chomu-joho-tak-bojatsja-u-moskovskij-tserkvi-896476.html .  With respect to the appointment of Yelensky, certain pro-UOC websites have sounded the alarm.  For example, it is stated at https://raskolam.net/ru/61560-zelenskij-i-lavrski-pisni-pro-golovne :  “This character has long been known to the Ukrainian Orthodox Church for his systematic aggression against her.  And there is no doubt that the attitude of Zelensky and the state apparatus towards the UOC will change for the worse.”  It is stated at https://spzh.news/en/news/70189-media-cabinet-appoints-an-active-enemy-of-uoc-head-of-state-ethnic-policy :  “Yelensky is a well-known enemy of the Ukrainian Orthodox Church, “the father of the law on ‘transfers’ of communities,” and also one of the authors of anti-church laws adopted by Poroshenko’s government.”  Yelensky definitely has a different perspective on the current church crisis in Ukraine than Bogdan, and this gives further support, in my opinion, to the belief that Bogdan was discharged for her views, especially as expressed in her interview on November 25.

The National Security and Defense Council of Ukraine in its decision of December 1 directed the State Service to conduct within two months in accordance with the Ukrainian law on freedom of conscience and religious organizations “a religious examination of the Charter on the administration of the Ukrainian Orthodox Church for the presence of a church-canonical connection with the Moscow Patriarchate, if necessary, to take measures provided for by law.”  https://risu.ua/en/nsdc-an-expert-examination-of-the-charter-of-the-uoc-mp-will-be-conducted-and-the-legality-of-using-the-kyiv-pechersk-lavra-will-be-checked_n134538 (Dec. 1 decision in English).  This examination will be one of Yelensky’s first assignments.  Prior to accepting the new position, Yelensky gave a major interview.  https://lb.ua/news/2022/12/23/540088_viktor_ielenskiy_strukturi.html  In the interview, Yelensky acknowledged that the state cannot ban the UOC, in part because it is not a legal entity.  He was then asked how this could be reconciled with the request that there be no structures of the Moscow Church in Ukraine. He answered:

This resolution largely depends on the Ukrainian Orthodox Church, which announced in May that it was removing all references to the Moscow Patriarchate from its charter.  But we have seen that in fact the connection with the Russian Church has not been interrupted.  All the signs that the church which separates from that church should have [such as declaring autocephaly and sending letters to the primates of the Local Orthodox Churches]are missing.  I think that the clergy of the Ukrainian Orthodox Church, which removed the mention of the Moscow Patriarchate from its charter, but remains part of the Russian Church – and refers to the October 1990 letter of the deceased Patriarch Alexy II  – understands this.  But it cannot or does not want to break this connection, because it fears that it will find itself in the situation in which the Kyiv Patriarchate was from 1992 to 2018, that is, in a state of uncertainty….. But the situation in which the UOC MP may find itself is radically different from the one that existed with the Kyiv Patriarchate, at least because it can enter into a dialogue with the Orthodox Church of Ukraine – with the church that has the 15th place in the diptychs… and talk about possible models of its acquisition of canonical status.  There are actually quite a few such models.

In the Russian media, a great amount of attention has been directed to the searches and others actions in Ukraine directed against the UOC.  Perhaps the Moscow Patriarchate hopes that if it becomes the champion of the UOC in the “persecution” now being directed against it, it will win back the hearts of the UOC faithful who have been so alienated by the Russian invasion of Ukraine and the resulting destruction and suffering.

On December 22, Patriarch Kirill gave a major address at the annual meeting of clergy of the City of Moscow.   http://www.patriarchia.ru/db/text/5985883.html  It included a discussion of Ukraine.  For example, the Patriarch stated:

Reflecting on the circumstances from which this conflict began, we can, among other things, notice in them an undeniable religious dimension: an irrational hatred of peoples professing Orthodoxy.  And if we now turn our mind’s eye to the past, then one cannot help but ask the question: isn’t this hatred also the reason why the entire might of the Western military machine fell upon Yugoslavia in 1999?  Isn’t it the reason why, through economic or political blackmail, with the help of so-called color revolutions, a wedge is consistently driven between countries whose peoples are bearers of Orthodoxy?  The manifestation of this hatred was the consistent persecution of the Ukrainian Orthodox Church, the nurturing of schisms by the state authorities of Ukraine, later, unfortunately, supported by the Primates of some Local Churches, who carried out the will of international curators.  The source of the internecine war in Ukraine was the evil will of people hostile to the Cross of Christ, Christian freedom, the common heritage of the Dnieper font.  The evil will of people who for years and even decades have nurtured divisions, enmity and hatred in the united Orthodox people of Holy Rus’ divided by political borders.  How much hatred spilled out at this time on Internet pages, in the media, even in communication between relatives!

The Patriarch also cautioned the Moscow clergy:  I ask you all in your public statements and assessments of what is happening now in Ukraine, as well as in your correspondence and conversations with the clergy of the Ukrainian Orthodox Church, not to go beyond the boundaries of what the Holy Synod has determined. So that someone’s imprudent and self-confident words do not further damage the unity of our Church, do not inflict new wounds on those who are already in pain, do not aggravate the suffering of our brothers and sisters in Christ.  God willing, peace will come, the possibility of unhindered communion and free conciliar discussion will return, then the fullness of the Church will judge how and what happened in the difficult times we are going through, and how it is appropriate for archpastors to continue to act so that the word of Christ’s truth may rule.