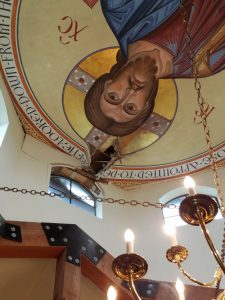 BIXBY, Okla. — The Holy Apostles Orthodox Christian Church is calling the damage done to their facility during Sunday’s storm a miracle.

“We saw the damage to the exterior and then we came in,” Father Ambrose Arrington said. “We were the first one’s here and there was not a lot but pieces of dry wall on the floor.”

None of the church’s elaborate gold leaf had been touched by the lighting.

Then, Arrington said he and other church officials looked up and noticed the damage to the painting of Jesus on the ceiling of the church.

“The damage didn’t touch the face of the Lord,” Arrington said. “It damaged the image but it didn’t actually touch the Lord’s face. If you look at the script, the text around the icon, it’s from Psalm 119. ‘He looked down from the height of His sanctuary to hear the groaning of the prisoner to release those appointed to death.’“

It was Fr. Ambrose’s 12-year-old daughter who noticed the lightning strike only destroyed the word “death” on the painting.

A contractor went to the church since the storm to assess the damage. He said it was a miracle nothing else was damaged and there was not a fire because the insulation was so scorched.

“The more we ponder it as a community and the more we think about it, the more astounding the whole event becomes.”

The storm happened on Aug. 6, which marks the Feast of the Transfiguration for the Orthodox Christian Church. It signifies when Jesus revealed his divine nature to his disciples. The celebration calls for special songs sung in the service that Sunday morning.

“This kind of thing has a way of galvanizing us, refocusing us,” Arrington said. “Yes, God is here. He sent us a reminder. I have one life and it doesn’t last forever. It’s time for me to rededicate myself to Him.”

“I would hope the people that don’t believe — they would see it and have their attention seized and begin to see there is something to it, because for us it clearly indicates that God is present,” Arrington said.

Arrington said as a congregation they wanted to leave the lightning struck painting up because of its symbolism. It will have to be removed and replaced so workers can repair structural damage to the building.