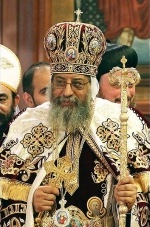 Vatican City, May 12, 2015 / 12:02 am (CNA/EWTN News).- In a message sent Sunday to the leader of the Coptic Orthodox Church, Pope Francis said advances toward reconciliation are strengthened by the martyrs and that Christians must unite to confront shared global challenges.

“Today more than ever we are united by the ecumenism of blood, which further encourages us on the path towards peace and reconciliation,” Pope Francis wrote May 10 to Pope Tawadros II of Alexandria.

Like the Bishop of Rome, the Coptic Orthodox Patriarch of Alexandria is known as “Pope” to his followers.

Pope Francis’ message marked the second anniversary of his meeting with Tawadros in Rome; the day has become an annual celebration of fraternal love between the Catholic and Coptic Orthodox Churches.

The Coptic Orthdox Church is an Oriental Orthodox Church, meaning it rejected the 451 Council of Chalcedon, and its followers were historically considered monophysites – those who believe Christ has only one nature – by Catholics and the Eastern Orthodox.

“With thanksgiving to the Lord, I recall our advances along the path of friendship, united as we are by one baptism,” Pope Francis wrote. “Though our communion is yet imperfect, what we have in common is greater than what divides us. May we persevere on our journey to full communion, and grow in love and understanding.”

More than 90 percent of the Christians in Egypt are Coptic Orthodox, and 21 Coptic men working in Libya were beheaded by the Islamic State in February. Soon afterwards, the 21 were recognized as martyrs by Tawadros.

“I assure you and the Christian community in Egypt and throughout the Middle East of my unceasing prayer,” Pope Francis wrote to Tawadros, “and I remember in particular the Coptic faithful recently martyred for their Christian faith. May the Lord welcome them into his Kingdom.”

Pope Francis also made mention of the document recently produced by members of the Joint International Commission for Theological Dialogue between the Catholic Church and the Oriental Orthodox Churches.

Entitled “The Exercise of Communion in the Life of the Early Church and its Implications for our Search for Communion Today”, the document was finalized during the commission’s twelfth annual plenary meeting, held in Rome this past January.

“I am certain that Your Holiness shares my hope that this vital dialogue will carry on and bear abundant fruit,” Pope Francis said.

The commission’s next plenary meeting is set to take place in Cairo, hosted by the Coptic Orthodox Patriarchate.

Pope Francis’ letter took note of the common challenges facing Christians of separated Churches, particularly in terms of family life, “which require us to work together in confronting these issues.”

The Bishop of Rome told Tawadros, “I appreciate your appointment last year of a delegate to participate in the Extraordinary Synod of Bishops dedicated to the family. It is my hope that our cooperation in this area may continue, especially in addressing matters related to mixed marriages.”

The May 2013 meeting between Pope Francis and Tawadros marked the first visit of a Coptic Orthodox patriarch to Rome in 40 years. Shenouda III, Tawadros’ predecessor, visited Bl. Paul VI in 1973, and St. John Paul II returned the visit to Egypt in 2000.

Pope Francis concluded his message saying that “with these sentiments, and recalling what has rightly become known as the day of friendship between the Coptic Orthodox Church and the Catholic Church, I exchange with Your Holiness a fraternal embrace in Christ the Lord.”