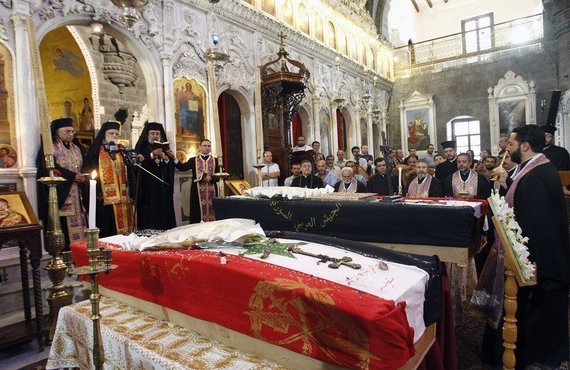 Rasha called her fiance Atef on his cell phone. A rebel answered and told her that they captured Atef and had given him the option of converting to Islam. He refused. So they slit his throat.

Atef was engaged to be married to Rasha. They are Christians and they lived in the ancient Christian village of Maaloula in Syria where the residents still speak Aramaic, the language Jesus spoke. Earlier this month the village was attacked by rebels of the Free Syrian Army made up of Jihadist factions from all over the Middle East including members of Al-Qaeda.

Kirsten Powers wrote yesterday in the Daily Beast of the slaughter of Christians now taking place around the world:

“As Egypt’s Copts have battled the worst attacks on the Christian minority since the 14th century, the bad news for Christians in the region keeps coming. On Sunday, Taliban suicide bombers killed at least 85 worshippers at All Saints’ church, which has stood since 1883 in the city of Peshawar, Pakistan. Christians were also the target of Islamic fanatics in the attack on a shopping center in Nairobi, Kenya, this week that killed more than 70 people. The Associated Press reported that the Somali Islamic militant group al-Shabab “confirmed witness accounts that gunmen separated Muslims from other people and let the Muslims go free.” The captives were asked questions about Islam. If they couldn’t answer, they were shot.

In Syria, Christians are under attack by Islamist rebels and fear extinction if Bashar al-Assad falls. This month, rebels overran the historic Christian town of Maalula, where many of its inhabitants speak Aramaic, the language of Jesus. The AFP reported that aresident of Maalula called her fiancé’s cell and was told by member of the Free Syrian Army that they gave him a chance to convert to Islam and he refused. So they slit his throat.

Nina Shea, an international human-rights lawyer and expert on religious persecution, testified in 2011 before Congress regarding the fate of Iraqi Christians, two-thirds of whom have vanished from the country. They have either been murdered or fled in fear for their lives. Said Shea: ‘[I]n August 2004 … five churches were bombed in Baghdad and Mosul. On a single day in July 2009, seven churches were bombed in Baghdad … The archbishop of Mosul, was kidnapped and killed in early 2008. A bus convoy of Christian students were violently assaulted. Christians … have been raped, tortured, kidnapped, beheaded, and evicted from their homes …’”

When I was a young Christian in high school I read the book, “Fox’s Book of Martyrs” which details the persecutions of Jesus’ followers beginning in the first centuries of the Christian Church. I remember thinking about how hard it must have been to be a Christian in those days.  It seemed so far away, so unreal. I feel the same way when I think of the Holocaust. It is beyond my comprehension to think of such cruelty against fellow humans just because of one’s religion or ethnicity.

But it is happening today. This time, instead of being separated by decades or millennia, we’re separated by thousands of miles. And that makes it seem just as unreal. The difference is that we have instant communication with real-time images and videos. We are watching the horror right before our eyes.

And yet, we are still unaffected.

Here in America we are insulated, comfortable, and indifferent. In her article Powers questions how such terror can be happening and yet so many Christian believers and churches can be so silent.

“American Christians are quite able to organize around issues that concern them. Yet religious persecution appears not to have grabbed their attention, despite worldwide media coverage of the atrocities against Christians and other religious minorities in the Middle East.”

I have two reactions to this. I’m angry at myself and my fellow Christians for being indifferent, and I’m ashamed of how flabby my own faith is.

I was pleased to see the groundswell of protest to the suggestion of US intervention into Syria last month. There are indeed a myriad of atrocities that are taking place there – on both sides. But we are fooling ourselves if we think we can resolve the conflict without causing more devastating consequences for those in Syria, the region, and our own national interests. So I am glad so many are standing against American strikes against Syria.

But why does the protest stop there? Why isn’t there equal outrage over the torture and killing of Christians throughout the Middle East?

The answer to that is surely complex but one simple and obvious answer is the foolishness of “political correctness.” From government to media to churches people are so afraid to speak out for fear they will offend Moslems. I say people are not stupid. They know the difference between peace-loving and law-abiding Moslems and the Islamic radicals who are waging war over centuries-old rivalries and fundamentalist jihadist ideologies. Middle Eastern Christians are caught in the middle of these Islamic tribal wars. We can’t resolve the ancient rivalries but we can speak out and influence world opinion on the persecution against Christians and other minorities.

The horror my fellow Christians are facing causes me to question the depth of my own commitment to Christ. It’s not a matter of comparing my faith to theirs and asking if I am willing to die for my faith. I’m not sure anyone can answer that question when we aren’t really being faced with it. But it does make me think about how flabby my faith is over so much less.

For example, compare being a Christian like Atef who is faced with the choice of renouncing Christ and becoming a Moslem or having his throat slit and the kind of choices we face in America: making it to church on Sundays or sleeping in; watching TV or reading our Bibles; going to the gym or praying; buying ourselves another outfit or giving money to feed the poor; on and on the list goes.

I know the answer to those questions – most of the time and for most of us. Let’s face it. We’re flabby. The sacrifices our brothers and sisters in other parts of the world are making today put us to shame. They are being tested. But so are we.

This is a time for us to take a serious look at our faith. Do we call ourselves Christians out of convenience? Just because it’s part of our family? Maybe we call ourselves Christian just because we’ve never questioned it and so we take the easiest form of it possible. Are we just “cultural” Christians where our faith doesn’t cost us anything and just makes us feel good about ourselves because we think it’s the right way to go? Maybe we think of ourselves as “spiritual but not religious” Christians. We think we can go it on our own and no one, no church or tradition, is going to tell us how to live. We want a faith but we don’t want it to cost us anything. We’d rather make up our own idea of who Christ – because that makes Him easy – rather than Who He really is which is really, really hard.

Consider some of His words (which our suffering brothers and sisters know quite well):

“Most assuredly, I say to you, unless you eat the flesh of the Son of Man and drink His blood, you have no life in you. Whoever eats My flesh and drinks My blood has eternal life, and I will raise him up at the last day. For My flesh is food indeed, and My blood is drink indeed. He who eats My flesh and drinks My blood abides in Me, and I in him. As the living Father sent Me, and I live because of the Father, so he who feeds on Me will live because of Me. This is the bread which came down from heaven—not as your fathers ate the manna, and are dead. He who eats this bread will live forever.” (John 6:53-58)

“I know your works, that you are neither cold or hot, I could wish you were cold or hot. So then, because you are lukewarm, and neither cold nor hot, I will vomit you out of My mouth.” (Rev. 3:15,16)

Compared to our suffering brothers and sisters we are lazy, flabby Christians. We need to return the Grace-filled, self-denying faith of the Church. We need to recover the spiritual gymnasium of the saints where we can exercise our flabby spiritual muscles through the spiritual disciplines of prayer, fasting, worship, sacraments, Scripture reading, and almsgiving.

They’re called spiritual disciplines because they’re not easy. They require effort and hard work. Most of us don’t want a faith like this. That’s why we’re flabby. Or, maybe, we really don’t have true faith at all and it’s just a game for us.

Well, we can be sure. It’s not a game for the Christians in the Middle East right now.