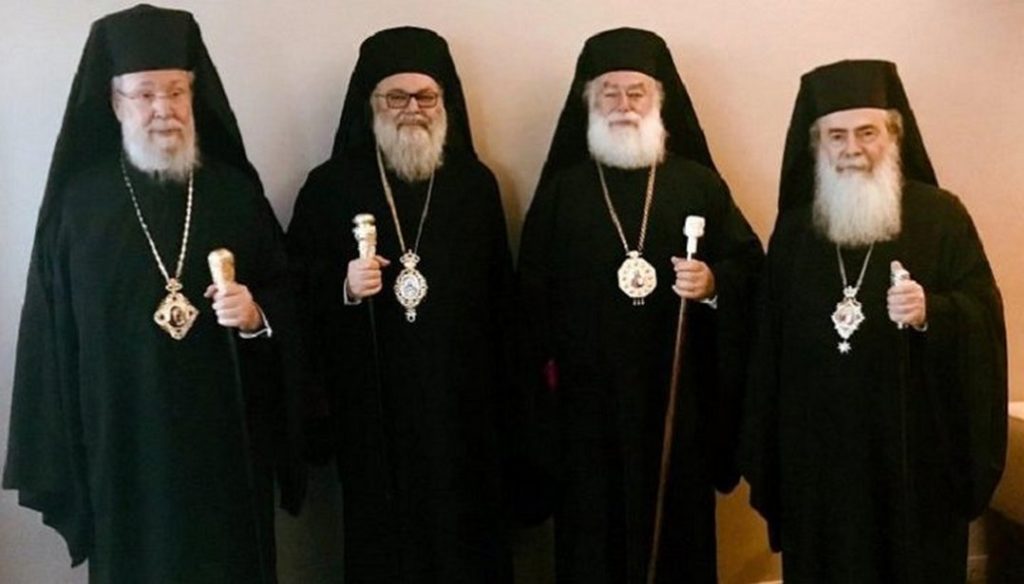 Primates of the Cyprus, Antioch, Alexandria and Jerusalem Orthodox Churches

“We elevated Patriarch Bartholomew to the third heaven ourselves giving him primacy, so all responsibility lies with us, Primates,” admitted one of the Greek hierarchs.

The newspaper “Orthodox Press” published fragments of a conversation with the “Greek Primate” without revealing his identity, who stated that Patriarch Bartholomew of Constantinople threatens church leaders with the removal of autocephaly. Excerpts from the conversation with the hierarchs are cited by oukraniko.blogspot.com.

As follows from the publication, “the first hierarch admits that the Primates are responsible, because they made a mistake by going to the Cretan Council and raising him (Patriarch Bartholomew – Ed.) to the third heaven.” Now they are reminded from Phanar that they themselves recognized the primacy of the Ecumenical Patriarch and hence there is no return.

“We gave him the right to threaten that he would take away autocephaly,” the hierarch quotes the publication.

Further in the newspaper is a transcript of the conversation with the “Greek Primate”:

“Bartholomew is not to blame … Oppressive surrounding is a problem. I mean all these young people who have enveloped him … they throw flattery dust into his eyes so that he eventually does not hear old Phanariots. <…> You didn’t see him say that “a meeting of three stars is rare”, referring to Bartholomew, Tsipras and Erdogan? It went viral on the Internet! ”continued the head of one of the Greek Churches.

“We, the Primates, are to be held accountable. We are to blame for having belief in the institution! We raised him to the third heaven, giving him primacy … It is not necessary for me to speak more … Talk about this with your Blessed brother <…> We made a mistake and went to the Council of the Primate (Council in Crete – Ed.). Of course, we had good intentions then, we did not understand where it would lead … Now they tell us: “YOU RECOGNIZED THE PRIMACY of the Patriarch and there is no turning back,” the hierarch said.

“The Primates are very disappointed and upset by the attitude of Patriarch Bartholomew, who treated them as ‘outcasts’,” the Greek edition emphasized. “Some Primates still retain their dignity and do not want the Church to be further disgraced by the wicked deeds of the ‘Eastern Pope’ and the ‘Papists’ who follow him.”

Recall that in the expert community they believe that Patriarch Bartholomew, who is not reluctant to be solely responsible for the creation of the OCU, is drawing other Greek hierarchs to his side, “bending them across his knee”. At the same time, as the honored journalist of Ukraine Vasily Anisimov noted, joint treason discredits all Greek Orthodoxy.