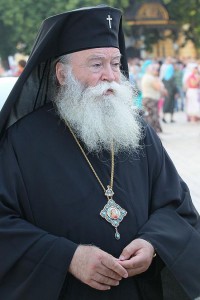 The official website of the Patriarchate of Bulgaria reports: on April 1, 2016, at the Church of St. Petka in Troyan (Bulgaria) Metropolitan Gabriel of Lovech celebrated a Liturgy of the Presanctified Gifts. After the service he held a conference of priests with all the clergy of the Troyan deanery participating. Various matters associated with liturgical and pastoral activities of the district’s clergy were considered.

At the end of the conference confessors of the Troyan district of the Diocese of Lovech firmly and unanimously supported the Declaration of the Clergy of the Troyan District, approved on March 23 of this year, concerning the stand of the ruling hierarch, Metropolitan Gabriel of Lovech on the texts of the documents which are to be considered by the Great and Holy Council of the Orthodox Church, to be held June 16-27 this year at the Orthodox Academy on Crete, namely, the serious objections regarding one of the documents, entitled “The relations of the Orthodox Church with the rest of the Christian world”.

We attach the Declaration and the Position-Letter of His Eminence Metropolitan Gabriel of Lovech.

Of the clergy of the Lovech deanery,

The Lovech Diocese of the Bulgarian Orthodox Church

We, the undersigned clergy of the Lovech deanery of the Bulgarian Orthodox Church of the Patriarchate of Bulgaria, during a conference of priests held 23.03.2016 in Lovech, having heard all,

We completely and unanimously support the stand of our ruling hierarch, His Eminence Metropolitan Gabriel of Lovech, submitted to His Holiness Patriarch Neofit of Bulgaria, chairman of the Holy Synod of BOC, in letter no. 61 of 11.03.2016, concerning documents which are to be considered by the Great and Holy Council of the Orthodox Church, to be held June 16-27 this year at the Orthodox Academy on Crete, namely, the serious objections to one of the documents, entitled “The relations of the Orthodox Church with the rest of the Christian world”.

We believe this declaration should be sent to His Holiness Patriarch Neofit of Bulgaria, chairman of the BOC Holy Synod, through His Eminence Metropolitan Gabriel of Lovech, and spread by the mass media.

Chairman of the Holy Synod of BOC

The City of Sofia

We received your letter no. 197 of 02.03.2016 in which you enclosed the approved texts to be submitted for consideration by the Great and Holy Council of the Orthodox Church, to be held June 16-27 this year at the Orthodox Academy on Crete. The decision to send these texts was made at the meeting of the Holy Synod of 06.02.2016, minutes no. 4 – the full session.

Unfortunately, we were not present at the meeting of 05–06.02.2016 for serious health related reasons. We consider it our hierarchal duty and right to express our serious objections to one of the documents, entitled “The relations of the Orthodox Church with the rest of the Christian world”.

In relation to paragraph 4:

The Orthodox Church has always understood the term “the unity of all” in the way that all those who fell into a heresy or a schism must first return to the Orthodox faith and obey the Holy Church, and only then through repentance can they be received back to the Church.

In relation to paragraph 5:

The quote: “The modern bilateral theological dialogues aim to search for ‘the lost unity of Christians’…”

Here it is necessary to specify that within the Holy Church the unity between Christians has never been lost, and since it will exist to the end of the world, “and the gates of hell shall not prevail against it” (Mt 16:18), as the Lord said, this communion will be eternal.

There are no other churches besides the Holy Orthodox Church, except for heresies and schisms, and it is dogmatically, theologically and canonically totally incorrect to call these organizations “churches”.

In relation to paragraph 12:

It reads that “in holding theological dialogues the common aim of all dialogues is the ultimate restoration of unity in true faith and love” which is absolutely incorrect and unacceptable, because it is proper to specify and emphasize that the return to the true faith is necessary for heretics and schismatics, but that this does not apply to the Orthodox Church.

Glory be to God that the Bulgarian Orthodox Church in 1998 ceased to be a member of the World Council of Churches, thus expressing its disapproval of its activities, since it cannot be a part of an organization where it (BOC) is regarded as “one of many, or a branch of the one church which seeks a way for being restored and struggles for its restoration by means of this World Council”.

One Lord, one Church, as the Creed proclaims…

Your Holiness, if these documents are not corrected, we will be accepting as law heretical teaching and the practice of receiving heretics and schismatics without them becoming true members of the One, Holy, Orthodox and Apostolic Church.

We entrust ourselves to your holy prayers

and remaining Your Holiness’ brother in Christ,

In April 2016 the BOC Holy Synod is to consider these documents along with all other matters concerning the participation of the BOC at the Pan-Orthodox Council.