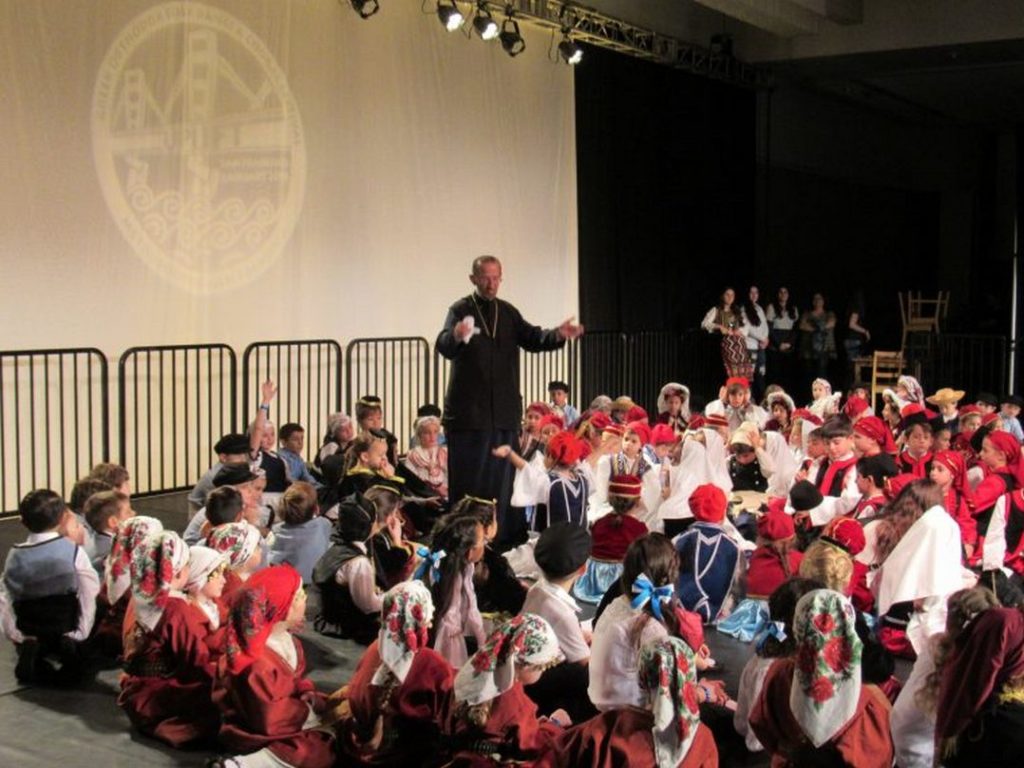 Metropolitan Gerasimos speaks to a group of dancers during the Greek Orthodox Folk Dance and Choral Festival in California organized every year by the Metropolis. (Credit: Metropolis of San Francisco)

BOSTON – The naves in many parishes of the San Francisco Metropolis were filled to capacity this past Christmas season, in contrast with other areas of the country where attendance was sparse.

In an exclusive interview with The National Herald Metropolitan Gerasimos explained, “the naves were filled with people that we have not seen in years. They are returning to their churches and customs. We also see young people who have established their families returning to the Church and it gives us hope about the future,” adding “I hope it continues that way.”

He also said that “recently we had a meeting with the youth at the camping center of our Metropolis with about fifty children, male and female. It was a very productive meeting. The concerns and the questions raised by the children should be addressed by the Church immediately.”

He continued, saying that “we all should create a level of education of Greek-Orthodox nature in order for our children to understand where they come from.” He emphasized that “the issue of the identity of our youth is the first priority of our Metropolis and I should tell you that there is a turn towards Hellenism.”

Metropolitan Gerasimos also said that “one of my first priorities in the New Year will be to teach and strengthen Hellenism with emphasis on the Hellenic Paideia because there is so much potential and interest here. Some children go and learn Chinese and I ask them ‘why are you studying Chinese when you have the Greek, which is the mother of all languages?’”

Regarding how receptive the children are towards their Hellenic heritage and identity, he said “if the parents, the priests, and the bishops show that they care, the children are serious about this issue.”

Asked whether the priests are fluent enough in Greek and appreciate their heritage themselves sufficiently to be able to transmit it to others, Metropolitan Gerasimos said, “I can’t say they all are, and that is the Golgotha for me and for them. About 45 percent understand very well the significance and importance of the Greek language and Hellenic education. Another 30 percent don’t have anything to do with either, purposely or because of their personal illiteracy, and there is another 15 percent who have gone to the other extreme, saying that if we don’t go back to Hellenism the Church is going to lose everything. I personally believe that there is a middle way here as well because we say “everything in moderation” (pan metron ariston). Definitely there should be a more active stance of the Church from what there is today. I make it clear in many ways that I will not ordain anybody who can’t read the Gospel, the Epistle, and the service books of the sacraments of the Church in both Greek and English.”

He added that, “if priests cannot say from the pulpit and the podium that we are Greek Orthodox Christians, and this is what it means to be Greeks, that is the point about the significance of the theological school,” adding, “the entire issue of Hellenism is the Church.”

Asked whether all theological school graduates are bilingual, he said that “that is a question about the policy and mentality of the School regarding the bilingualism of the priests, but it is a question that must be answered by the Archdiocese; I am sorry, but that’s the way things are.”

Gerasimos then addressed the future of the Church and the Greek-American Community, saying, “My wish is that unity and love prevail, for there to be vision at the Archdiocese. There should be planning and a strategy for the Archdiocese, the metropolises and the communities as to where the Church is going to go in the 21st century, because we have not done that, we have not plotted a course.”
Speaking about the Theological School he said “at this moment they are suffocating up there (at the School) financially, let us set aside the other issues at this time. I receive every day e-mails saying for God’s sake S.O.S. – we are drowning”.

As to why things have reached such a dire state, he said “there are many answers to that question and you know things very well.”
The National Herald posed a hypothetical question to Gerasimos about what he would say, if he were to have a heart to heart talk with Archbishop Demetrios, about what the latter should do, first, for the good of the Church and Greek-American Community, and secondly, to preserve his own posthumous legacy. The Metropolitan said that “the issue of the Archbishop is one that neither I nor the other hierarchs can individually determine and resolve. Every Archbishop and every hierarch is a servant of the Church and the People and we serve in our positions temporarily, not forever,” and he added “this is what we must realize and we must start from there.”

When asked if he believes that the Ecumenical Patriarchate is going to miss the train of history for Greek Orthodoxy in America, Gerasimos replied, “I think the Patriarchate and His All Holiness knows history very well and he has full knowledge of the things that are happening around him. At this moment the Patriarchate is being attacked on many fronts and it needs help. The mother Church was, is, and will be the main point of reference for every Greek Orthodox Christian and more than that.”