[ditty_news_ticker id="27897"] Metropolitan Isaiah of Denver: “With One Heart and One Mind” - Orthodox Christian Laity 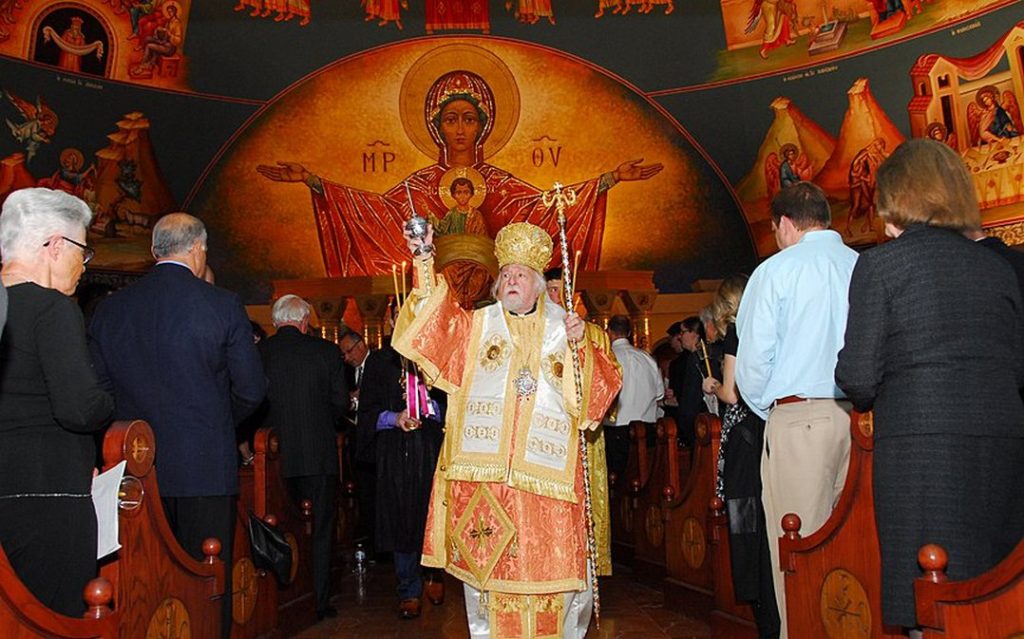 Metropolitan Isaiah is a native of New Hampshire, having been born in Portsmouth, one of four children born to Dennis and Mary (Kapsimalis) Chronopoulos who had emigrated to the United States from Olympia, Greece.

After his primary and high school education, he served with distinction in the United States Marine Corps during the Korean conflict.

He was enthroned as Bishop of Denver in 1992, at the Greek Orthodox Cathedral of the Assumption of the Virgin Mary in Denver, Colorado, and in 1997, the Holy and Sacred Synod of the Ecumenical Patriarchate elevated him as Metropolitan of Proikonisos and Presiding Hierarch of the Greek Orthodox Diocese of Denver.

In 2002, the Ecumenical Patriarchate elevated the status of the Diocese to a Metropolis, and in 2003, elected Metropolitan Isaiah as Metropolitan of Denver.

The fifty parishes, three chapels, and two monasteries under the spiritual guidance of Metropolitan Isaiah are scattered throughout 1.3 million square miles encompassing 12 states as well as the western parts of Louisiana and Missouri.

The National Herald: How did religion impact you generally and as a Christian?

Metropolitan Isaiah: In regard to religion, it was stressed in my upbringing that all creation had its beginning with almighty God. Even though the theory of evolution was stressed in American society, as well as the existence of God, it always appeared to me that creation was too complicated to develop accidentally. My belief that the Greek Orthodox Church was established by the Lord Jesus Christ through His coming into the world both as God and Man, stayed with me throughout my military service in the Marines.

In reflecting back to the late nineteen hundreds, it was obvious that the various Christian denominations continued to have self-identity while the predominant Roman Catholic Church continued to strengthen its foundation of western Christian teachings preserving its traditional rules and regulations.

TNH: How was Orthodox Christianity introduced and how did it evolve in the Western Hemisphere?

Metropolitan Isaiah: Shortly after the First World War and the downfall of the Ottoman Empire, countless Greek Orthodox Christians migrated by necessity to the Western hemisphere which included North, Central, and South America, preserving their Apostolic traditions as they had inherited them from generation to generation. Many other Orthodox Christians had already begun to migrate to America due to the fact that Alaska was a part of the Russian Empire. Although the native liturgical languages were and still are used, it was natural for the English language to be introduced. Today in some canonical Orthodox jurisdictions the English language is exclusively used. This began with the offering of sermons in English by American-born clergy. Moreover, the fact is that many people, who have believed in the Christian faith in general terms, are now converted members of Orthodox Christianity in almost all of the Orthodox jurisdictions and consider the use of English as normal.

TNH: Do you ever see all orthodox jurisdictions in the Diaspora eventually coming together as one?

Metropolitan Isaiah: During the past three decades attempts have been made to unite all the canonical Orthodox jurisdictions in working together initially as a federation. This has not yet happened. An unfortunate result of this reality is that there are Orthodox Christian chaplains in our military forces who are not recognized as belonging to the one, holy, canonical Church, but are seen much like the Protestant chaplains of different Christian denominations by the Department of Defense of our nation.

We know that a growing number of Orthodox Christians have made attempts for all the canonical Orthodox jurisdictions to work together. One organization is The Orthodox Christian Laity, which came together in the 1980’s. Unfortunately, some Orthodox Christians believe that its members have been misinterpreted in how they wish to see all the Orthodox working together. The fact that this desire is a reality among many has already been established almost twenty years ago in the form of the Assembly of Canonical Orthodox Bishops of the United States of America. Now that this reality has come about, we can be assured that the Greek Orthodox Church will not continue to be “the best kept secret in America.”

TNH: How has the Coronavirus affected the church?

Metropolitan Isaiah: Now with the Coronavirus which has been planted in our nation and in the world, deliberately or accidentally, we have seen total confusion in the lives of all Christians who have been deprived of holy services in their houses of worship. With our Greek Orthodox people, we have witnessed much irritation and even anger that we are not allowed to continue to live our faith in a country which has been known for its freedom of religion as the First Amendment to the Constitution of our nation declares.

The surprising factor with this restriction of our human rights is that we Greek Orthodox have begun to live the life of the first Christians of the pagan Roman Empire. This reality should be a blessing to us because in several epistles of the New Testament we read of the Church which our Lord Jesus Christ established as “the church in the home.” In one epistle we read the words of Saint Paul writing to the Romans saying, “greet the Church which is in the house (Romans 16:5).” By this we are reminded that the Church which our Lord established began in the homes of the first Christians due to the fact that the Christians were ruthlessly being killed almost as a daily reality. Therefore, the “live-streaming of our holy services to the homes of our people today is powerful evidence that the Church which our Lord established through His Holy Crucifixion and the offering of His Body and Blood on the Holy Cross almost two thousand years ago is the very same Church which is the Greek Orthodox Church today. But as Saint Paul states in his epistles: In the Church there is neither Jew nor Greek but consists of all people everywhere.

TNH: How does the Church affect those that are affected most by the virus?

Metropolitan Isaiah: A basic teaching of the Lord is that the members of the Church consider it normal to help those in need. Our Greek Orthodox Church has always preserved this teaching of Christ Who considers all people His children. The Ladies Philoptochos Society of our Archdiocese which was established in 1931 is historic evidence that our people are ready to help all those who are in need.

In regard to this pandemic that has been planted throughout the world at the same time and produced hundreds of thousands of victims, we know from the words of the Lord that evil is still rampant, but that its termination has been forecasted by our Lord in the expected future.

What is our expectation? Our Lord tells us: Since we are all icons of our Lord Jesus Christ and as He came into the world to correct His icons for His coming Kingdom, we are invited by Him to demonstrate concern and love to those who do not realize that God, Who created us with His Agape (love) wishes to see us using this Agape upon those who should realize that God came into this fallen world not to judge us, but to love us and make us ready to be heirs of His eternal Kingdom wherein His love will reign upon all His perfected human icons.