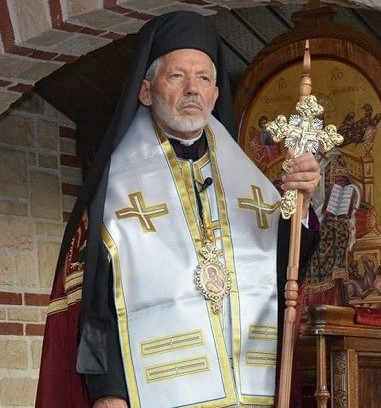 With the advent of the coronavirus, our churches were closed to the public on March 17, 2020, by order of the government authorities in Canada (we are generally referring to government authorities in Canada, because matters in regard to health do not fall under the jurisdiction of the federal government, but rather under the jurisdiction of provincial governments and local municipalities). The churches reopened on June 12, 2020.

For the period between June 12 to July 3, 2020, the churches dispersed Holy Communion normally, until one or more persons (their names are known, but will only be made public at a later date) complained to the government authorities in Canada that the Greek Orthodox Churches are giving Holy Communion with a common spoon for all the faithful, and that this practice would create serious health problems. It is noted here that all Christian churches, as well as places of worship of all other religions, have received and continue to receive the same treatment on behalf of government authorities.

Following this complaint, I met with some priests on Friday, July 3, 2020. (Not all of the priests were present since the authorities did not allow gatherings of more than 10 persons). Because it was a Friday and we could not communicate with the government authorities in time, it was decided that on Sunday, July 5, 2020, no Holy Communion was to be given to the faithful during the Divine Liturgy.

I then came into contact with officials of government authorities, as well as with other Church leaders. (Other Orthodox, Catholics, Copts, Armenians, etc.). The leaders of the other churches affirmed that they did in fact change in some way how Holy Communion was being dispensed.

I had a meeting with some of the priests (we telephoned all the other priests – 34 all together – in Ontario). I contacted the government authorities and it was decided that Holy Communion should take place as described below:

The above was accepted by government authorities in Canada and on Sunday, July 12, 2020, the priests in our churches gave Holy Communion with a separate spoon for each believer.

Most Communities accepted these measures without serious reaction. Some Christians reacted and shouted in the churches during the Divine Liturgy.

Some Christians have organized and are threatening to hold a rally outside our Holy Archdiocese next Sunday. It is said that there are two groups. One is a group of extremists and another a group that follows the monasteries and the late Fr. Ephraim. I cannot believe this, because Fr. Ephraim was peaceful and always cooperated with our Holy Archdiocese.

On Tuesday, July 14, 2020, a representative of the relevant government authorities called me and said that he had information that in two churches (he even named the churches) Holy Communion was given with a common spoon for all the faithful. He added that if this continues, measures will be taken for all Greek Orthodox churches, fines will be imposed (fines reach up to ten millions $ 10,000,000 for organizations) and they may go as far as to close our churches again. He went on to say that they do not police churches. However, when they receive reports of violations, they are obliged to investigate them and to act in accordance with the law and impose sanctions. ‘The problem is yours,’ he said. ‘You are the ones who are divided. Your people are making the complaints’.

You understand how sad this is.

I assured this government official that Holy Communion will be given with a separate spoon for each Christian who comes for communion.

We must all realize – archbishop, the priests, the community councils and the people (the faithful)-, that we are living in difficult times. The instructions of the government authorities clearly state that it is forbidden to share objects of worship. Therefore it is imperative for Holy Communion to be given with a separate spoon for each believer. This is a temporary measure depending on how long the Covid-19 will last.

Some Christians shouted in the churches. An instigator near the microphone shouted three times “Sotirios is unworthy.” I respond. I am not sinless. Every time I conduct the Divine Liturgy, I pray: “No one bound by carnal desires and pleasures is worthy to approach, draw near, or minister to You, the King of Glory…”. “He who is without sin let him throw a stone first”. Saint John Chrysostom says: “for more stormy billows vex the soul of the bishop than the gales which disturb the sea.” Is it possible, I wonder, that those shouting feel how much the Archbishop is suffering and how hard he tried? Shouldn’t they be like Simon of Cyrene? Must they always “throw stones” at the Archbishop?

As for the rally that some are organizing for Sunday, July 19, 2020, in front of our Archdiocese, I say to them: personally, I do not mind. But this will harm Orthodoxy and Hellenism. We risk presenting ourselves to all others as self-destructive, so willingly ready to inflict harm on each other. It would be preferable for the leaders who are organizing this demonstration to contact me and have a meeting, in order to discuss and solve our problems as a family.

I pray and I ask you to pray also that God helps us recover from this grave affliction of Covid-19. To restore peace to the world. To live peacefully as one Christian family, as befits true Christians.