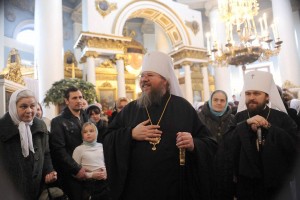 Source: Orthodox in the District

It is with a glad heart full of rejoicing that I share with you that earlier today Metropolitan Jonah received a signed letter of official release from Metropolitan Tikhon and the Synod of the Orthodox Church in America (OCA) releasing him to the Russian Orthodox Church Outside of Russia (ROCOR). His Eminence Metropolitan Hilarion (Kapral), First Hierarch of ROCOR, has been notified that the OCA Synod has, at long last, made good on their promise to release Metropolitan Jonah. Vladyka Jonah is thus received into ROCOR’s jurisdiction as a retired Metropolitan.

This means that, at long last, Metropolitan Jonah will be free to serve wherever he is blessed to do so by the Synod of the ROCOR and Metropolitan Hilarion. He will be free to serve unhindered at St John the Baptist ROCOR Cathedral (where he has been serving for most of the past three years) and wherever else he is invited to do so, with the blessing of the ROCOR Synod. He will continue his teaching ministry at St John’s (including regular sermons and lectures which may be found here), continue to speak at conferences and symposia and other academic events, and, above all else, continue to serve weekly Liturgies at the Holy Archangels Chapel in Washington, DC. He ultimately plans to begin a monastery, but in the meantime looks forward to living and teaching the Orthodox Faith and serving his spiritual children. 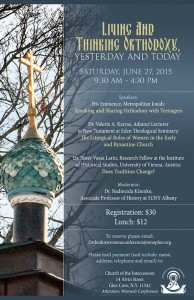 Now that he is no longer in the OCA, Metropolitan Jonah will lose his modest stipend which he has, until now, received from the OCA in his capacity as one of their several retired Metropolitans. ROCOR cannot afford to grant Metropolitan Jonah a stipend, so he will rely on the charitable support of the Holy Archangels Orthodox Foundation to meet his basic living needs. You may donate to the Holy Archangels Foundation and subscribe to receive e-mails here.

At the end of June, on Saturday, June 27, Metropolitan Jonah will present at a conference at the ROCOR Church of the Intercession in Glen Cove, NY, titled “Living and Thinking Orthodoxy: Yesterday and Today” along with Dr. Sister Vassa Larin and Dr. Valerie Karras. Dr. Nadieszda Kizenko, Professor of History at SUNY Albany, will moderate the discussion. Below is the event poster. Glory to God for all things!