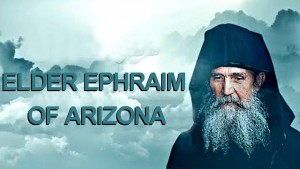 Source: We Are Orthodox

Monastics like to say that they are in this world, but not of this world.  But lo and behold, a key Orthodox Christian monk in the United States, the Elder Ephraim, has just taken a very worldly step.  He is the star in a public relations video extolling the monasteries he founded in America.

The Russian-made film, with English sub-titles, was recently posted by the web-site, We Are Orthodox, a site, along with others, that has been critical toward the Ephraim movement.  The critics, over some years now, have seen the movement as not truly monastic and as usurping the role of Greek Orthodox parishes.  A narrator in the film speaks of the Greek Orthodox Church in America being in decline and becoming close to Catholicism and Protestantism. Ephraim, who got his start at the famous Mt. Athos Monastery in Greece, received the word, we are told, to take “true” Orthodoxy to America.

But, it hasn’t all been smooth-sailing. Theodore Kalmoukos, religion writer for The National Herald, the main Greek-American paper in the U.S., reported in 1998 that Ephraim “first joined the Russian synod in exile, after receiving a ‘directive’ from God as he proclaimed at the time. However, when he was threatened by the Ecumenical Patriarch that he would be defrocked, he received another ‘directive’ from God and abandoned the Russians.”

Fast-forward to 2014, writing on what the Greek Orthodox Clergy-Laity Congress should do, Kalmoukos advocated this: “The Monasteries…should be dealt with immediately. Actually, the discussion is long overdue. This cultish fundamental Monasticism has already become ‘anti-Church’, which is ruining many parishes, makes some priests fanatic ‘Ephraimites’ and brings confusion to young people. This needs to be dealt with now, before more damage is done.”

Was his advice taken? Not as far as we know.

Most of the video scenes are of Ephraim’s headquarters monastery, St. Anthony’s in Florence, Arizona, which is located in fairly remote desert land about half-way between Phoenix and Tucson. He has developed some 20 other monasteries in the U.S. the narration informs us. But, how he has financed them, we are not told. Financing is one of the main concerns of critics. (A typical response by monks, when asked about finances, is to say “God provides.”)

The Elder Ephraim is portrayed in the video as a Christ-like person who restores the sick to health and even has time to go out and give food to the poor. Bus-loads of people are shown visiting St. Anthony’s, some of whom apparently use this monastery, and others, as their local parish, for Confession and other Sacraments.

In short, the 26-minute video conveys the view that a wonderful, Godly phenomenon has taken place in the Orthodox life of America, namely the arrival and work of one Elder Ephraim.

While the film can be seen as surprising, its timing is not. For, even though criticism of the Ephraim movement has been present for over a decade, more recent developments have apparently awakened this PR response.

What are some of these developments? Let’s cite some, briefly.

It would appear that the Ephraim forces have decided that this PR effort is advisable because trouble may be getting too close, legally and otherwise.

In the meantime, this video can be taken for what it is: a public relations effort that does not give a complete picture of the Ephraim monastery situation.