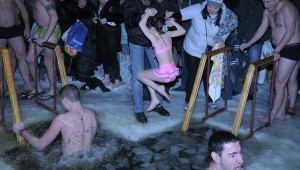 More than 82,000 bathe in icy water on Epiphany in Moscow

Epiphany, also known as Theophany, is one of the Great Feasts, marking the baptism of Jesus Christ by John the Baptist in the Jordan River and the beginning of his ministry. The Russian Orthodox Church celebrates the holiday on January 19, in line with the Julian calendar.

Honoring an old Russian tradition, cross-shaped holes are cut in ice over lakes and rivers and celebrators plunge into the water – typically three times, in honor of the Holy Trinity – around midnight, often after an attending priest says a prayer.

Police said on Saturday they dispatched about 3,500 officers to maintain order overnight. No major incidents were reported.

More than 50 Epiphany bathing sites were set up across Moscow, where waters were blessed by Orthodox priests during the night, with 260 rescuers monitoring the safety of swimming.

The feast’s peculiar feature is the rite of the Great Blessing of Water, performed in Russian churches twice – on January 18, on the eve of the feast, and on Epiphany proper, after Divine Liturgy.

Holy water is then given to believers, who store it for long periods and use it to cure illnesses and bless themselves or things and premises around them. Some people think any water – even from the taps on the kitchen sink – poured or bottled on Epiphany becomes holy.