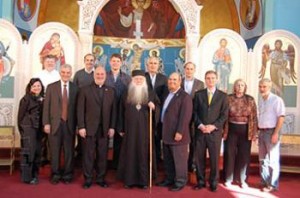 The Board of Directors of the Orthodox Christian Network (OCN) met in Ft. Lauderdale, FL at the network’s headquarters in St. Demetrios Greek Orthodox Church on January 26, 2013. His Grace Bishop Peter, the official episcopal liaison of the Assembly of Canonical Orthodox Bishops of North and South America, attended the meeting and opened the proceedings with prayer.

Executive Director Fr. Christopher Metropulos noted that OCN and affiliated radio stations are now heard by over 2.6 million listeners in over 200 countries. He also cited the working relationships established between OCN and all of the Orthodox Christian jurisdictions of the Assembly of Bishops, which enables news and edifying podcasts, videos, and blogs to be shared with the faithful through multiple OCN delivery platforms.

After the meeting, the Board of Directors announced the following initiatives:

Starting in February, listeners will be able to hear broadcasts of “Come Receive the Light” in Greek, Spanish, and Russian. In addition, launch of OCN’s iPhone app is now complete and a new Android app is now available.

OCN has launched the OCN Webstore; purchases will benefit OCN’s worldwide ministry at no additional cost to the shopper.

A new podcast, “Our Life in Christ and in America,” will be hosted by Antiochian Orthodox Christian Bill Hinkle, former Minority Whip in the Washington state legislature, and Fr. Constantine Papademos, pastor of Saint Katherine Greek Orthodox Church in Elk Grove, CA and the longest serving chaplain of the California State Assembly in its history.