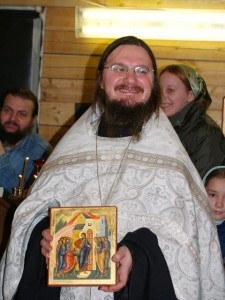 I think that one of the most important problems facing the Orthodox Church in Russia, and even beyond its borders, is the ideological rigor mortis of the Church. The Church is considered as a kind of dead body; it is thought to be frozen and that nothing should be changed in it. It is understandable that we should not change dogmatics and Church Tradition — no one argues with that. However, the problem is that people try to preserve superstitions and false ideology, and, what is worse, they try to hang onto bad remnants of the Soviet period. I have traveled throughout the canonical territory of the Moscow Patriarchate, and I see one and the same picture everywhere. People do not know God or how salvation takes place; and all of their time is taken up with completely unimportant matters such as the minutiae of this or that rite, the details of this or that church policy, or one regional view or another.

In my opinion, it is an enormous misfortune that people have lost their Christ-centeredness. People have forgotten about the fact that we are, first of all, Christians, the children of God the Father and of Christ, and that we must move toward holiness and salvation. As a part of this, one sees a controversy over the frequent reception of Holy Communion, which unites us with the Lord. Some people think that it’s not that important, that one can somehow “earn” one’s salvation. However, they do not realize that this is the heresy of Pelagius — that one can earn one’s salvation by one’s own effort.

On the other hand, the standard of church life that they expound is sinful, pure and simple; it is a distortion of the real Church Tradition. For instance, one hears that Russians, because they are Russian, are already Orthodox. In one article that I read, I saw the assertion that even atheists are truly Orthodox, if they are part of the Russian culture. This is the replacement of faith with culture. Orthodoxy is God’s revelation, preserved in pure form since the times of the Apostles. One now sees efforts by some to replace the New Testament with national myths, including old ones that the Church has always fought against.

…Paganism often disguises itself in the Church under the appearance of Christianity — not in overt exterior manifestations, but hidden under a facade of pietism. People forget that their goal is to reach sanctity. Some of them believe it is a sin even to think of such a possibility, that they could reach sanctity, even though it is a fulfillment of a direct commandment of the Lord. We should spare no effort to overcome this problem. To overcome this, we must issue a new call for people to return to holiness. For this, it is necessary that we revive catechesis throughout the entire Church. Even those who are already baptized should study the Faith. People must know in Whom they believe, and what they should do in order to approach Him. People coming to church see it as an assembly line of spiritual services. They are not offered any spiritual growth; therefore, they go to the sectarians.

People think, in error, that sects are easier than the Orthodox. Recently, I had a chance to associate with Pentecostals. I learned that it is their practice to pray five hours during the day. What Orthodox Christian prays five hours a day? Sectarianism is the consequence of the Church not informing people of the commandments of the Lord, commandments that our Lord expects us to fulfill. The Gospel is seen as nothing but a collection of pious sayings; it is not seen as a means of real contact with God. We so fear being seduced by the world that we end up doing nothing. This is a terrible spiritual problem. If we do not overcome it, very many Christians will be ruined. It is an ideology of rigor mortis. It is not conservatism; rather, it is the murder of the Church. (The Orthodox Word No. 268, 2009, pp. 213-215)